Focus on continuous improvement—not the vocabulary behind it.

Continuous process improvement and eliminating waste should be the goals of any organization, but it requires leadership and vision to stay the course. With commitment, the benefits of lean manufacturing emerge as better teamwork on the shop floor, bigger profits and increased growth.

Cutting tools manufacturer Hypertherm Inc. witnessed those transformative benefits first-hand. Around 1999, the company changed one of their products from a “craft style,” in which one person built the entire product from start to finish, to a team approach. When products were made by one person, it usually took about 1.5 to two days to build, and then if it passed quality testing, it shipped. If not, it would go back to the original person. The company moved to a cellular manufacturing system in which the product was made by teams of four to six people, which lead to more eyes on the process. “It radically improved our quality levels as well,” says Charles Hackett, director of corporate improvement at Hypertherm. When he joined the company in 1995, there were about 250 people. Today that number has climbed to about 1,400. And although many other factors were involved, lean has helped along the way. 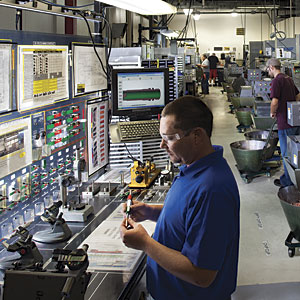 For companies looking to replicate the success at Hypertherm, Hackett emphasizes the lean mindset necessary to improve. “The focus is on reducing waste and delivering value to the customer. The power is that anyone in organization can participate in it,” Hackett says. “A lot of it is common sense. The team has to feel that they are empowered to make a change. The key thing with lean is that everyone gets involved and feels they have the authority.”

The role of management should be to make sure the employees have the resources they need, and then get out of the way. “There’s a lot of waste involved in looking over someone’s shoulder and checking on them,” says Hackett.

Many companies use their own terminology to describe lean processes, but whatever you call it, lean should be about continuous improvement. The tools vary, and many companies adjust the process to suit their business. Consider these tips from lean experts as a way to get the most out of the process.

Whenever he’s asked to explain lean, Kyle Toppazzini, author of “Maximizing Lean Six Sigma Sustainability,” and president of Toppazzini and Lee Consulting, says, “I explain it how my wife explains it: ‘We’re going to put your process on a diet. We’re going to help you do things faster, cheaper, better.’” And as he tells his seven-year-old, “It’s about being able to help people do things smarter, so they have more time on their hands to do the things that they like. I tell him if he’s able to get his homework and chores done, he has more time to play his games. I believe lean is no different at an organizational level.”

Say you want to improve your lean program, or get started on one. Kevin Duggan, president of Duggan Associates, says that setting a destination—not simply having a vision—is the most important aspect. He offers this comparison. If you get on a flight in New York, and the pilot announces, ‘We are going west,’ that would be a vision. But it is important to have a destination. The pilot needs to say something specific: ‘We’re going to Chicago.’ In the same way, companies should know exactly what they want to accomplish.

“In the past companies have learned, here’s all these tools you can learn to improve your operation. Like puzzle pieces. Now, someone shows what the box top will look like. How much faster can you build when you have the picture?” Duggan asks. “That’s the secret really: what is the end goal?”

“Lean should really be about achieving operational excellence, not just making factories efficient, Duggan says. “Companies have done the wave of ‘Let’s make things efficient.’” But this efficiency won’t necessarily lead to excellence or business growth.

Give it a Try

Once goals have been set, the next step is to keep an open mind. Some people may think lean is just another fad and in six months it will be gone. Lean implementations can fail, or simply peter out, but the idea behind lean is that it should make a job easier.

“Lean is fundamentally about working with the people in your organization to find the best solutions for your problems,” says Sue Via, a senior project manager at TechSolve. “To me, the focus of lean is the focus on people. Just worry about, let’s work on the job and make it better for everybody. Let’s get rid of all the extra work you’re doing that doesn’t add to the bottom line and just causes a lot of headaches.”

But getting rid of extra work is in itself hard work, she says. When Via works with companies on lean projects, she makes sure people know she is there to help, not to judge. “For the most part I try to get them to understand I’m there to help them achieve the goals that they’ve set. I am not going in there saying, ‘You’re doing a bad job.’ I say that ‘You’re doing the best you can with broken processes.’”

By using lean, companies should be able to streamline processes and get rid of waste. Note that the idea is to reduce waste—not people. A common misconception is that lean may reduce staff, but this is not the intent. Even if a position is eliminated through lean efforts, the staff member should be moved to another role.

Once the staff is assured of the security of their positions, it is time to discuss removing waste. “If you tell the worker, we’re going to look out for waste of time, material and energy, and provide instructions on how to recognize it, then I think you can get results very quickly,” says William Levinson of Levinson Productivity Systems. “It doesn’t take long to teach people that.”

To encourage participation in lean, Levinson offers a quote from Henry Ford on labor relations: “It ought to be the employer’s ambition, as leader, to pay better wages than any similar line of business, and it ought to be the workman’s ambition to make this possible.”

And it is important to look at waste of time, material and energy in all directions, including the supply chain.”Waste of material is pretty obvious but waste of time is not something people can really identify,” Levinson says. “It’s the least obvious unless you know how to look for it.”

One way to see the waste more clearly is by videotaping a process, Levinson says, “with the understanding that you’re not videotaping the workers to assess their performance, you’re assessing the way the job is designed. It forces the waste to become visible.”

Though the ways to find waste may have changed, the ideas behind lean manufacturing have been around for a while. Don Buckingham, vice president of operational excellence at Epalign, says, “The focus has remained consistent. Lean is concerned with the concept of flow: material flow, cash flow, throughput. Lean has always been concerned with flows. The way that’s most often categorized is the concept of waste. Waste obstructs the flow.”

Perhaps lean programs sound good, but there isn’t a big push to get started. Toppazzini says that the best approach is to improve all the time—not to wait for falling revenues and rising costs. “As an organization, why wait until you’re losing money to start eradicating inefficiencies in your system?” Toppazzini asks. “Why wait? Why not be a stronger member going in?”

He says that it is important to coach and mentor along the way to get the best results. And new leadership shouldn’t change the system if it is working as intended.

“By ensuring that Lean Six Sigma becomes a part of everything that you do, what leader would come in and dismiss that?” asks Toppazzini. “If that initiative is driving profit at the company, it’s hard to believe any new CEO would want to change that.”

The Benefits of Lean Manufacturing: Processes and Components

Lean Six Sigma In The Age Of Artificial Intelligence: Harnessing The Power Of The Fourth Industrial Revolution