It's All About Growth: Quality's 18th Annual Spending Survey

January is not typically considered a season of growth, but Quality’s research reports a lot of it. It’s spending survey season and quality professionals are starting to invest in new equipment.

It’s an optimistic outlook this year, with more positivity reported for quality related items this year versus previous years, according to our 18th Annual Spending Survey.

BNP Media’s market research division, in conjunction with Quality, conducted the study to provide information about spending for capital equipment, software and services. As in the past, the study was conducted in order to determine a plant’s actual spending for quality assurance equipment, systems, software, and services compared to the projected/budgeted amount. We also wanted to assess any change in quality professionals’ approach to quality today compared to a year ago, as well as spending on quality equipment and services overall. Finally, we looked at the change in allocation of budget within quality equipment and service categories. 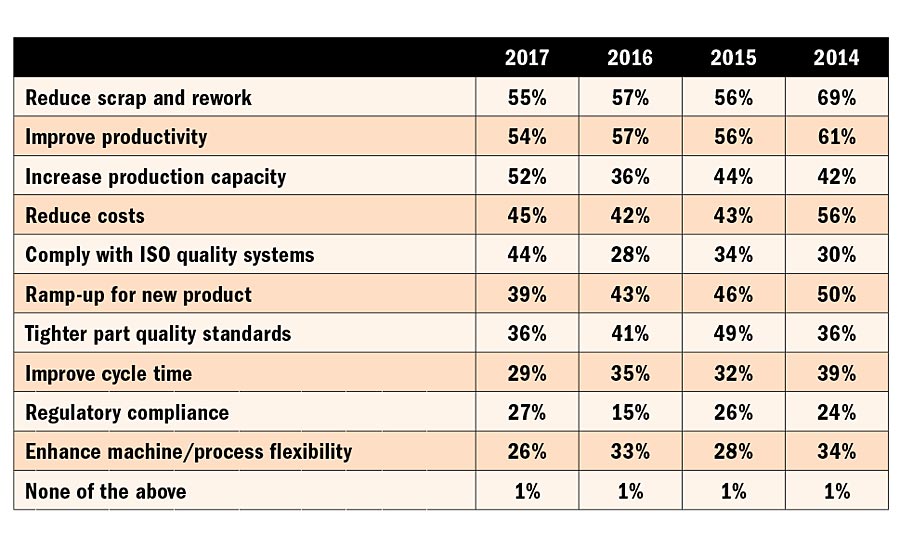 A Look at Quality

More than half of respondents (58%) indicate that the importance of quality has gone up as compared to a year ago. Forty percent said quality was about the same level of importance and only 2% said it was less important. This is in line with previous results.

When asked about the current year’s actual spending vs. projected, these results were similar. Three out of five respondents indicated they spent the same in 2017 as they budgeted for. Twenty percent indicated they are spending more than budgeted, on average by 19%. For the 17% of respondents that spent under budget, this was under by an average of 22%. 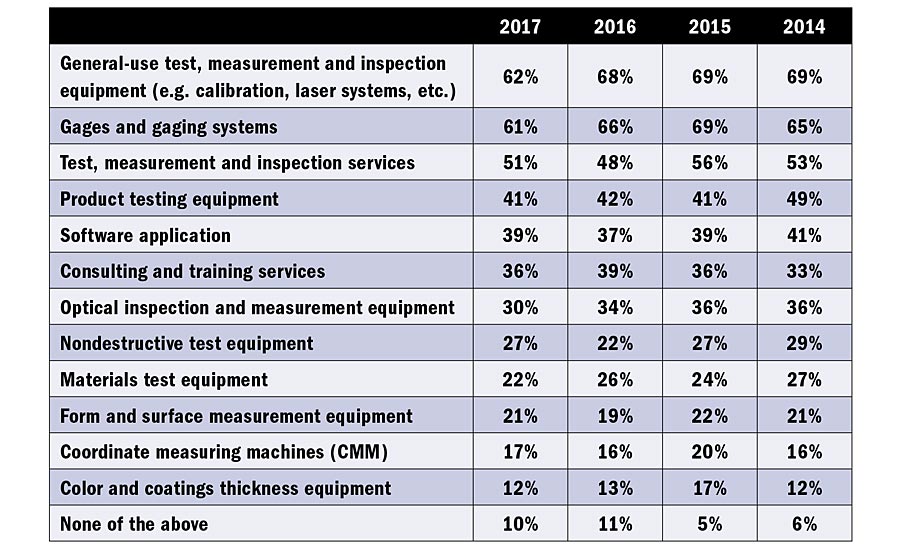 The reasons for investment have remained the same. Reducing scrap and rework, improving productivity, and increasing production capacity are the top investment motivations for those that plan to spend more this fiscal year. Other reasons included: to reduce costs, comply with ISO quality systems, ramp up for new product, tighter part quality standards, improve cycle time, regulatory compliance, and enhance machine/process flexibility.

And now let’s take a closer look at these product categories.

Budgets are on the way up. For many of product categories, these are expected to jump this year. On average, the planned budgets for coordinate measuring machines; gages and gaging systems; product testing equipment; nondestructive testing equipment; consulting and training services; and general use test, measurement and inspection equipment increased compared to 2016 results. In some cases, this was a significant jump as well. Product test equipment went from a planned budget of under $69,000 in 2016 to almost $92,000 in 2017. 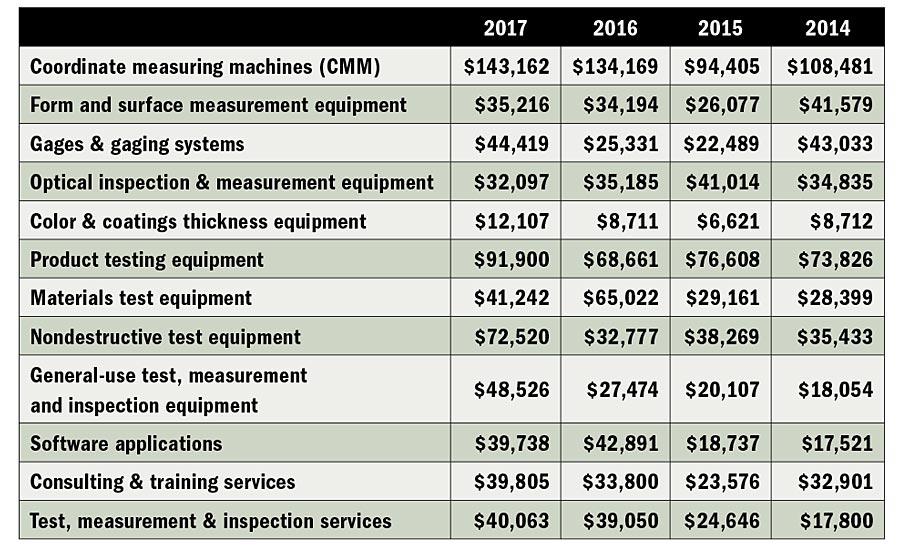 CMM Budget Allocation
What percentage of your total fiscal 2018 coordinate measuring machines (CMM) budget will be spent on the following machine types?

The coordinate measuring machine (CMM) budget seems poised for another increase in spending. Last year was a banner year for CMM spending according to respondents. The average 2017 fiscal year budget for CMMs was $182,505, more than a $100,000 jump from the $80,480 average budget for 2016. Sixty-one percent of respondents predicted an increase for this year as well.

Among the respondents that plan to invest in form and surface measurement equipment, the 2017 budget for these items was higher than 2016—almost $43,000 as compared to just under $33,000. In addition, half of respondents expect it to remain the same for this year. This trend was seen for a range of product categories: rising budgets but the same amount predicted for the following year.

The average 2017 fiscal year budget for gages and gaging equipment nearly doubled compared to last year’s results (more than $41,000 up from almost $23,000), though the majority of respondents expect it to remain the same for the 2018 fiscal year. Just under a third of the gaging budget is planned to be spent on handheld measuring tools.

The optical inspection and measurement equipment budget has held steady, with an average 2017 fiscal year budget reported at $36,525.

The average budget for color and coating thickness equipment is $13,305, though 55% expect a 2018 fiscal year increase.

The average 2017 fiscal year budget for product testing equipment tripled from 2016, jumping to almost $96,000 from roughly $32,000. Despite this jump—or perhaps because of it—about two-thirds of respondents expect it to remain the same for the 2018 fiscal year. 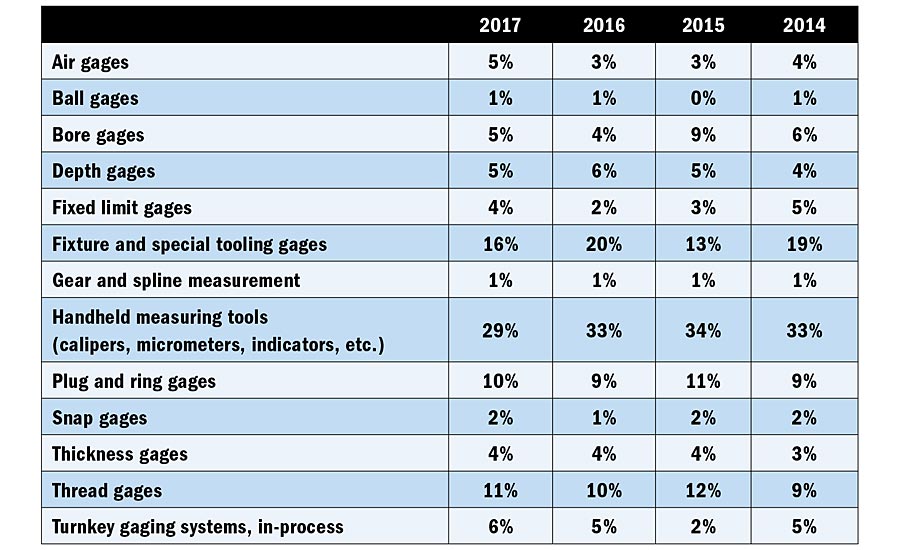 Gaging Budget Allocation
What percentage of your total fiscal 2018 gages and gaging systems budget will be spent on the following systems?

Consulting and training services also saw an increase in average budgets from the 2016 fiscal year to 2017. This is expected to hold steady for 2018 as well. Almost half of this budget is expected to go towards certification/registration.

The average 2017 fiscal year budget for test, measurement and inspection services held steady compared to the previous year and over two-thirds of respondents expect it to remain the same for 2018. More than half of this budget is expected to go towards calibration services.

Software was one of the few categories that reported a lower average for the 2017 fiscal year budget; however, 42% expect this to increase for the 2018 fiscal year. Compared to the past year, respondents anticipate spending more on APQP, ISO 9000 and enterprisewide quality software.

The study was sent to a systematic random sample of the domestic subscribers of Quality and fielded October 18 to November 1, 2017. The survey received 282 useable returns, for a 1.5% response rate. Three $100 gift cards were given to three randomly selected respondents who participated in the study.

Thank you to all those who participated in this year’s survey. Our research depends on you and we appreciate all of your help. Q