“Where metrology is concerned we are primarily a Zeiss shop,” says Camcraft Quality Control Engineer Daniel Gruben. “We currently use ten different pieces of Zeiss metrology equipment in various aspects of our operation. I recently calculated the impact of one of our most recent purchases, a Zeiss O-Inspect multisensor CMM. It measures parts produced by five different production machines and has cut our part inspection time by about 50% on those components. In the year-and-a-half that we’ve used the O-Inspect, it has saved us roughly 4,500 hours of inspection time.”

Camcraft currently uses three Zeiss Contura machines. “Those are our general purpose workhorses,” says Gruben. “We use them in all of our departments, both existing units and two more recent purchases, to check the accuracy of finishing, blanking, CNC operations, and more. The Contura active machines with navigator technology all use Vast XT gold sensors. The Zeiss ProMax Rack option lets us store the various styli setups so we don’t have to recalibrate when we change styli.”

Camcraft is using a Zeiss Accura for checking prototypes as well as in mass production of diesel fuel injector components. “The Accura gives us precision to the micron level, which is critical in certain areas,” says Gruben. “It employs contact sensors and is ideal for use with larger, more complex parts. The stylus mount on the Zeiss Vast XTR sensor head can rotate as far as possible in up to 15 degree increments to check angled holes. The measuring surface is over a square meter, so we’ve equipped it with the optional Zeiss high-dynamic package, which allows travel at up to 800mm per second to speed up measurement over a large area. The high-dynamic package includes protection using laser scanners to slow down operations if anyone enters the machine’s safety zone.”

The Accura has a number of features designed specifically for high-precision applications. The system’s bridge is extremely rigid and insulated to minimize variance due to temperature change. The system uses Vast XTR sensors, and its maximized measuring range guarantees accuracy when measuring into corners, and the navigator technology improves precision and speeds up calibration. 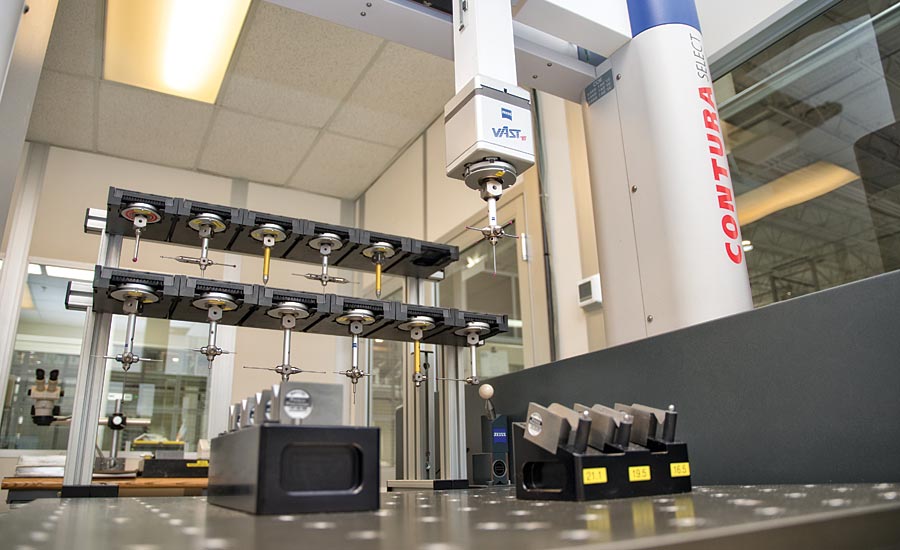 Zeiss Industrial Metrology has long been Camcraft’s partner in providing metrology systems to help ensure the quality of the company’s machined components.

Camcraft has an additional Accura machine on order to handle growing demand. This machine will be equipped with a rotary table and will be used to check precision ground and turned components. “This is another case in which we can reduce cycle time by combining the functions of multiple machines onto one. The new Accura will increase our flexibility and boost productivity,” says Gruben.

Many metrology tasks are better suited for either contact measurement or for optical scanning. At Camcraft, there are jobs that require both, and that’s where Zeiss O-Inspect excels. In the past, parts that required both contact and optical sensing for measurement were being evaluated on two different systems. A Zeiss DuraMax system was being used to do contact measurement on some features due to their shape and the need for a high degree of accuracy. Other features of the same parts didn’t have the same tight tolerance, and contact measurement would have been unnecessarily time consuming. For those features, the parts were moved to another vendor’s vision system, which was being used to measure small crevices and some radii. Each of the two separate measurement processes took about 30 minutes, and personnel had to move parts between the two systems.

The two separate measurement functions are now being done using the Zeiss O-Inspect system, which features both optical and contact sensors, all managed with Zeiss Calypso software. “After some trials we found that, using O-Inspect, the entire two-part process took about half the time, and there was no longer a need to move parts between systems,” says Gruben. “That meant less time for the machines and less time for the operators, greatly improving the efficiency of our quality control.” The O-Inspect system at Camcraft uses a Zeiss Vast XXT contact scanning sensor and the Zeiss Discovery lens for maximum, distortion-free field of view in optical measurement.

After being replaced by the O-Inspect system, the Zeiss DuraMax machine was repurposed for use as a final audit inspection CMM. “We moved it to the lab where it sits next to the auditors. It is used for the final check of parts before they are sent for packing and shipping,” says Gruben. DuraMax is suitable for the most challenging environments, with IP54 dust and moisture protection and thermal shielding. The DuraMax system at Camcraft is using optional Zeiss Calypso PCM menu-guided software to control measuring runs and an optional automatic temperature reader with dual workpiece sensors.

The newest additions to Camcraft’s Zeiss metrology lineup are two Rondcom 60A form testers. These are deployed in Camcraft’s grinding area and used to measure roundness, cylindricity, and runout. “We could do that with other CMMs, but the two Rondcom machines give us a much higher level of accuracy,” says Gruben. “The Rondcom rotary tables run on air bearings. These deliver high measuring speeds and accuracy of up to ten nanometers, so we can now measure roundness down to millionths of an inch. Air bearings also eliminate drive vibration, further improving accuracy. And they eliminate wear and tear and the need for lubrication.” 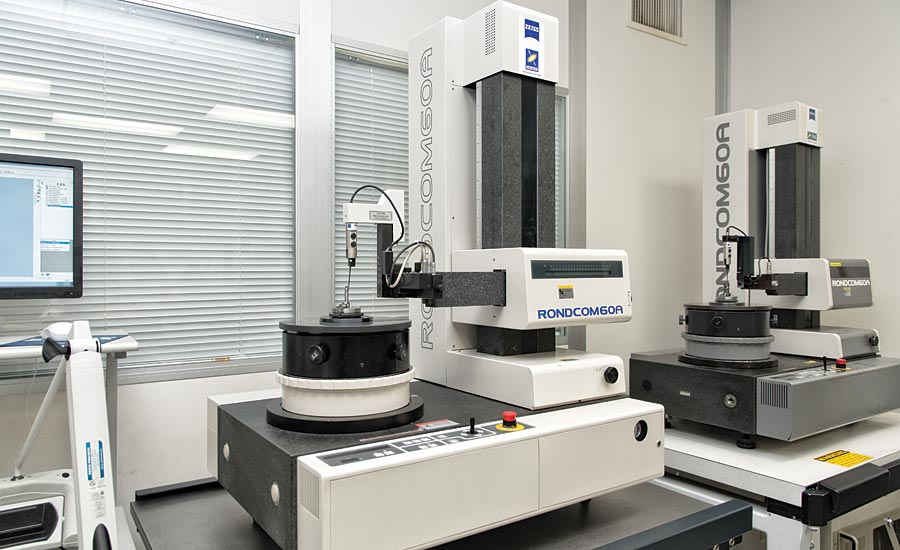 One of the Rondcom machines has an automated CNC offset probe that can be tilted and pivoted under CNC control. This eliminates the need for most R-axis adjustment and minimizes error. “It lets us write programs to go from inside diameter to outside diameter measurement without an operator having to stop the machine and make adjustments. It really simplifies things for our operators,” says Gruben. “One of our Rondcom machines is about sixteen years old; the other was purchased just two years ago to help keep up with the company’s growth. Both are still solid as a rock.”

A Zeiss Surfcom 5000 is being used to measure form and finish in Camcraft’s fuel injector cell. It is designed to measure multiple surfaces in a single step where accuracy is critical. It uses five lasers on its interferometer and delivers resolution of 0.31 nm. It is designed to eliminate environmental influences and operate at high speeds to reduce measuring times.

“We’ve migrated work that we used to do by hand to the Zeiss machines, so we keep most of the metrology equipment busy,” says Gruben. “We keep finding new uses for the equipment, and we usually know when we need something new. They provide solid, reliable hardware, and they keep making improvements to help us protect our investment. The software is easy to program and use. That lets each of our operators add metrology to their skill sets, and that helps keep them in tune with the parts they are producing. We really value our relationship with Zeiss.”

Achieving the Ideal Measuring Room with the Right Accessories