Where to Start with Ultrasonic Thickness Gaging

There are a wealth of resources for understanding the basics and newest advances in ultrasound.

It’s an exciting time to work in ultrasonics. Phased array and other innovations in ultrasound have expanded its applications and uses, and with the advent of carbon fiber reinforced plastics (CFRPs) in aerospace, the need to nondestructively test critical parts for thickness and flaws continues to grow.

For young workers looking for a career in a booming field, ultrasonics presents opportunities not just in aerospace and other manufacturing markets, but energy and facility maintenance, as well.

For a grasp of the introductory ideas, newcomers can begin with a Level I training course from ASNT, or those provided by private companies such as Hellier and the University of Ultrasonics.

“When I’m training people on how to use our equipment, usually we like people that already have some training—ASNT TC-1A Level I at least—that’s for thickness gaging,” says Keith Erk, global sales and marketing manager, NDT Systems. “But often times there are new guys starting out, or companies that have not historically done this type of testing in-house. So you can also have a classroom full of people who are going to be expected to use the equipment but have never heard of it. So, I like to bring it down to something they’re familiar with, like mentioning ultrasound at the hospital.”

Another introductory frame of reference could also be sonar. “Everyone remembers watching movies of sonar sending out sound, and you get a ping back,” he continues. “It’s that common reference that people can say ‘Oh, yeah, I’ve seen the ultrasound machine in the hospital. I know what that means.’ But they can also get an idea that we’re sending sound out through material if they’re using a mental image of sonar. They’re sending out a wave and looking for a wave back, a reflection back.”

Erk likes to encourage novices grappling with the technology by saying that, luckily, it’s science, but it’s not rocket science.

“Ultrasound in materials is based on long-established physics, and the formulas and everything involved with calculating how the transducers work has been done for us. This stuff has been around for a long time.”

In ultrasonic testing, a transducer sends a high frequency soundwave at a specific frequency and diameter at the far wall of a pipe, fiberglass part or other desired test specimen. The wave bounces back in a predictable way depending on the substrate material, and the device measures the roundtrip time of flight (TOF) of the soundwave, calculating a thickness based on the known speed of sound in the test material.

Ultrasonics can also be used for flaw detection, as the soundwave reflects off any internal flaws, changing the predictable sound pattern within the piece of metal, plastic or other material.

Ultrasonic tools also allow for a technique referred to as mapping, which allows the user to cover much larger test areas than would be possible by manually touching the probe along series of testing points. Compared to the transducer in a traditional ultrasonic instrument that contain one or two elements for sending and receiving sound, phased array instruments utilize transducer assemblies containing dozens of elements. It allows the tool to sweep across several angles and paths in sequence, creating an image of the inspection area.

Both methods have made ultrasonics a reliable tool for measuring the thickness of boiler tubes, checking for pipe and storage tank corrosion, and checking the wall thickness of plastic used in automotive, containers, buckets and other molded products. “They use ultrasound to make sure that the walls are thick enough, but they also use it to make sure that they’re not putting too much plastic in it,” Erk says.

And, as mentioned above, the increased use of CFRPs in aerospace has opened up a whole new market for ultrasound, as the tool is used to scan over the area of a large airplane part to inspect whether the CFRP has experienced delamination.

Materials that don’t perform well under ultrasound inspection are generally porous, like foam, due to the high level of air in foam, as well as most concrete with larger aggregate. 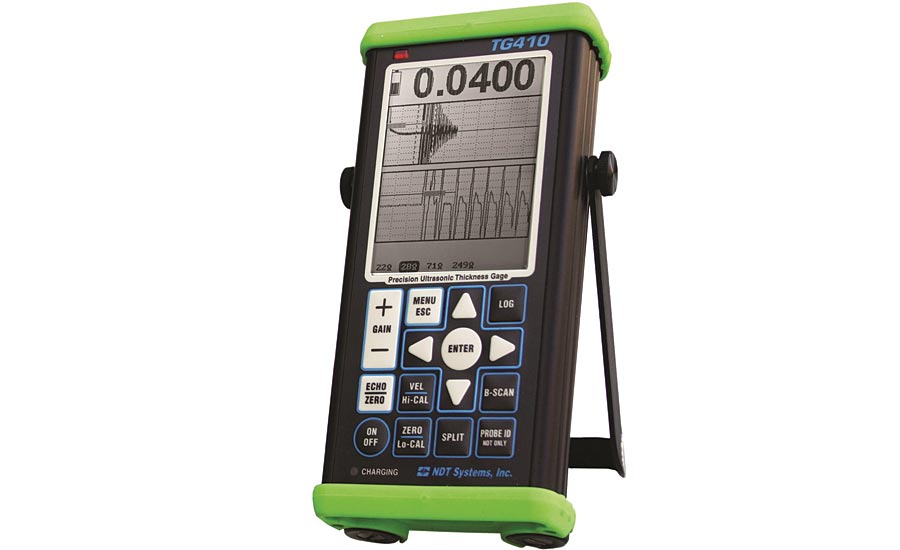 Ultrasonic thickness gages send a high frequency soundwave at a specific frequency and diameter at the far wall of a pipe, fiberglass part or other desired test specimen, and measure the roundtrip time of flight (TOF) of the soundwave.Source: NDT Systems

The typical Level 1 trainee might be a new worker with a high school degree or GED equivalent, often looking for training to find a job performing boiler tube inspections. The first level will teach them how to perform basic thickness readings.

“You’re looking for a digital readout, but you’ve got to understand what’s going on to get a good reading,” Erk explains. “So, typically, a high school graduate who’s taken an interest in NDT, they may well have been trained in welding and decided they don’t want to do that hot, dirty job anymore and have decided to do something different.”

A worker with a Level I certification should be qualified to properly perform specific calibrations, specific evaluations for acceptance or rejection according to written procedures and to record the results, according to ASNT. “The NDT Level I should receive the necessary instruction and supervision from a certified NDT Level II or III individual.”

A Level II trainee will learn how to perform shear wave inspections on welds, among other more advanced techniques, Erk says. Once Level II is attained, the “individual should be qualified to set up and calibrate equipment and to interpret and evaluate results with respect to applicable codes, standards and specifications,” according to ASNT. “The NDT Level II should be thoroughly familiar with the scope and limitations of the methods for which he is qualified and should exercise assigned responsibility for on-the-job training and guidance of trainees and NDT Level I personnel. The NDT Level II should be able to organize and report the results of NDT tests.”

At Level III, a certified individual can develop, qualify and approve procedures, according to ASNT, as well as approve techniques and interpret codes, standards, specifications and procedures. “The NDT Level III should have sufficient practical background in applicable materials, fabrication and product technology to establish techniques and to assist in establishing acceptance criteria when none are otherwise available.” In addition, an individual with Level III should also be familiar with other NDT methods and can train and qualify Level I and II personnel.

“It is an excellent path for a young man or a young woman who is looking for a career,” Erk says. “You can literally go anywhere in the world and find very interesting work.”

What You Need to Know When Selecting an Ultrasonic Thickness Gage

Depth Gaging from Top to Bottom