Leak testing is a method of product quality control that identifies manufacturing inconsistencies by porosity testing a manufactured part or system leaks. This nondestructive test is typically accomplished by sealing any ports or holes the test product might have and then introducing a test medium—usually air, nitrogen or helium—into or around the test piece. From there, a trained operator or a leak test instrument will be able to observe any leaks coming into or out of the product.

A leak test can be performed at various stages throughout the manufacturing process. Many original equipment manufacturers (OEMs) require that components be leak tested to ensure integrity before assembly. The OEM might also perform a leak test on the entire system during different stages of assembly to ensure an optimal, safe product for the end user. Similarly, a leak test might be used at various times during a product development process to bench test prototypes. Throughout this article, we will cover important considerations when implementing a leak testing process, as well as some key trends in the leak testing industry.

At its core, leak testing provides verification that a manufactured product meets predetermined specifications that allow the part or system to operate as intended. This process is crucial to ensuring product quality and the safety of end users. Additionally, a reliable leak testing process will help reduce product warranty claims and the cost of quality for systems manufacturers.

There are also several production efficiency benefits to an optimal leak testing process. A leak test will help validate supplier component quality and verify that operators have assembled system components correctly. In doing so, the manufacturer is able to improve production efficiency, and eliminate rework and product scrap waste. “If a leak is missed early on in the manufacturing process, it can cause significant headaches later,” says Mark Spindler, director of technical sales at FasTest Inc. “Imagine you are assembling a sixteen liter engine, everything is going well, but then the final leak test fails because the head gasket was not seated correctly. The amount of wasted time that goes into quarantining the engine, identifying the cause of the leak, disassembling the system and repairing it, is enormous. It’s also largely avoidable.” If a leak testing process is consistent, manufacturers will be able to use leak tests to perform root cause analysis for assembly or component breakdowns, which will greatly improve the manufacturing processes as a whole and reduce the amount of failed tests down the road.

The Importance of the Connection

The most important aspect of any leak test is a reliable, consistent leak-tight connection and seal for all ports and holes on the part or system being tested. This holds true regardless of the type of leak test being utilized; however, the connection is often overlooked when a manufacturer is developing their leak test process. The goal in any leak test is to isolate the component or system for testing, which can only be accomplished when all of the test ports and holes are sealed and leak tight.

Without a proper seal, the leak test is prone to a false failure: leak tests that register a leak—or fail—when in reality the part being tested is actually leak-free. A false failure is typically caused by an improper connection or profile seal, which allows media to seep into or out of the test part, resulting in a test failure. Many failed leak tests require the part be scrapped or moved off the manufacturing line for retesting. The potential product scrap waste and rework, as well as process bottleneck considerations, are significant. Fortunately, false failures are easily avoided utilizing reliable quick connection tools, dependable sealing and proper rigging.

There are multiple ways to create a leak tight seal for the part being tested, ranging from homemade clamps and sealing devices, to commercially available manual devices, to highly engineered quick connection tools. Homemade devices might be appealing to some manufacturers as they are fairly low cost. Unfortunately, those sealing methods are unreliable, which ends up costing the manufacturer more in the long-run in the form of rework, product quality issues and bottlenecks in the manufacturing process caused by long leak test setup times. Another leak test connection option is the commercially available manual devices, such as standard plugs that involve sealant and wrenching. While commercial manual devices are slightly more efficient than homemade sealing devices, the connection process is still very time consuming and prone to false failures. Both the homemade sealing devices and the commercial sealing devices are known to regularly cause damage to the test part during the test, creating further waste and potential safety issues for the end user. 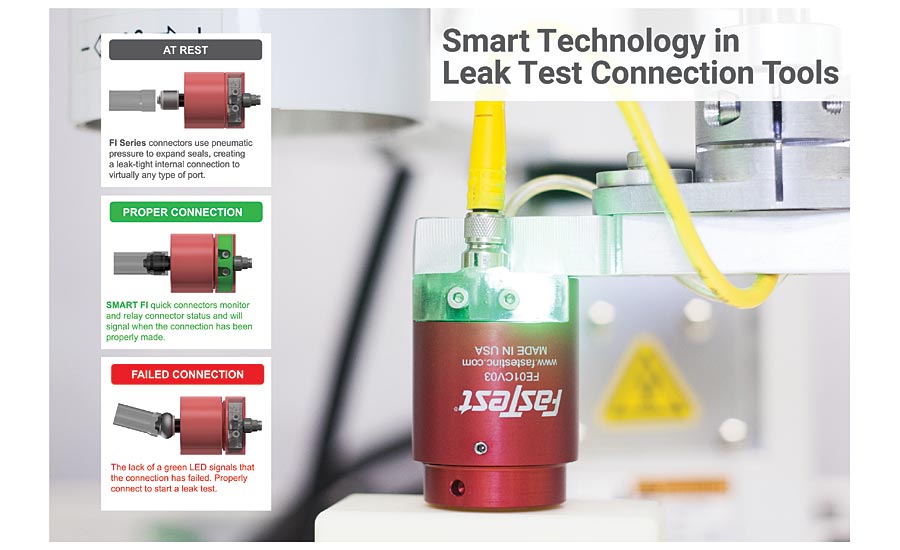 The most reliable, consistent and efficient method of creating a leak-tight seal is a quick connection tool. These tools are engineered to create a repeatable leak-tight connection to a specific type of port, thread, tube or hole. These tools allow users to safely make the necessary connections to run a proper leak test without the concern of false failures or unintended disconnections. These devices significantly improve the efficiency of the leak testing process by cutting test setup time by up to 95%, reducing product scrap waste and rework, and sealing the devices without damaging the test piece. For the majority of leak testing processes, a quick connection tool will ultimately provide the lowest cost of ownership.

The Industry 4.0 movement is disrupting manufacturing companies all over the world. Industry 4.0 technologies that embrace sensors and analytics to facilitate Six Sigma and lean process improvement in manufacturing are becoming the norm. The goal of companies that embrace the Industry 4.0 movement is to produce goods at lower costs, drive throughput efficiencies, and provide superior output quality than lagging competitors. In leak testing, Industry 4.0 is driving changes in many key areas: two of the most crucial areas of focus are data collection and the rise of intelligent test connection tools.

The rise and success of big data across various industries has prompted many manufacturers to take a more proactive approach to gathering data relating to all aspects of their manufacturing processes. Manufacturers use this data to drive process efficiencies, reduce warranty claims and cost of quality, and ultimately squeeze out waste to raise profits. In leak testing, data acquisition is largely used to maximize the efficiency of the test itself, as the leak test is usually a bottleneck in the production process. Data points acquired through new leak testing technologies, such as cycle counts, max and min test times, rigging and derigging times and the like are used to identify points of waste and inefficiency, which are then modified to increase throughput.

Many manufacturers, however, are taking the next step and using leak testing data to improve their manufacturing processes as a whole through root cause analysis. The latest in leak testing technologies allow manufacturers to more quickly identify the culprit of a failed leak test—often a very time consuming process. “This is really the beginning of an effective root cause analysis process,” says Dustin Sirny, director of advanced technologies at FasTest. “If you can use technologies and data analysis to identify consistent failure points, or components that are leaking too often, you can then make adjustments to your manufacturing and assembly process upstream.”

To help gather more process and leak testing data, many manufacturers have begun relying on “smart” connection tools. These tools have incorporated sensors that allow leak test process managers to collect data and monitor testing operations at the point of connection. “Many manufacturers want more data to work with in general, but more importantly they want actionable data that can improve their processes immediately,” said Sirny. “Data points such as seal placement can help process engineers immediately identify problems in the leak testing process and take specific corrective actions.”

With smart quick connection tools, users are able to ensure that the proper connections have been made and that the test part or system has been successfully isolated before running a leak test. “We’ve seen many manufacturers completely transform the way they are leak testing, and more importantly how they are isolating their manufactured part, “ said Sirny. “Intelligent test connections also allow operators to monitor the health of the connection tool’s wear components and optimize maintenance schedules to avoid costly downtime.”

As Industry 4.0 continues to revolutionize manufacturing processing and companies, leak testing methods will also evolve. “The leak testing market went largely unchanged for several years,” said Sirny. “With the emergence of Industry 4.0, we are seeing major changes in leak testing for the first time in a decade. I expect that we will see many more changes to the leak testing process and best practices in the coming years.” Q

Andrew Klobucar is the director of marketing at FasTest Inc. For more information, call (800) 444-2373, email Andrew.Klobucar@fastestinc.com or visit www.fastestinc.com.