The leak testing process is a crucial quality control method that helps manufacturers ensure that their final product will be safe and reliable for end users.

Leak testing is a quality control measure used by manufacturers to identify product inconsistencies that occur during manufacturing or assembly. A successful leak test is accomplished by sealing all leak points in the component or system being tested, such as an open port or tube, and then introducing a testing medium—typically air, helium or nitrogen. The medium is either put into or surrounding the part being tested, where a trained operator will then be able to identify a leak, either through visual observation or by monitoring pressure changes through a leak test instrument. If the product fails the leak test, it is determined that either the product or the sealing points have a defect, and the product must either be scrapped or go through a retesting process. If the product passes a leak test, it then moves onto the next stage in the manufacturing process.

The leak testing process is a crucial quality control method that helps manufacturers ensure that their final product will be safe and reliable for end users. A reliable leak test can also help manufacturers identify flaws in its manufacturing processes, and eliminate defective products from entering the field. This process, in turn, dramatically reduces warranty claims, product recalls, and the cost of quality for manufacturers.

A reliable leak test can also significantly improve the efficiency and reliability of the manufacturer’s production process. Firstly, a leak test can help validate the quality of components coming from external suppliers, and that the manufacturer’s operators have correctly assembled the components. This, in turn, helps reduce rework and product scrap throughout the production process. Secondly, if a leak testing process is reliable and consistent, manufacturers are able to use the leak testing process to help identify the root cause of product defects—whether it is a faulty component or an error in the assembly process. In being able to identify and address a repeated point of failure, the manufacturer can then enhance their manufacturing process as a whole.

There are several different leak testing methods a manufacturer can use to ensure that their product is leak-free. The most primitive, low cost method is a bubble leak test. This method requires an operator to seal all open ports on the test part, which is then pressurized with a medium and submerged in water or sprayed with a soapy-water solution. An operator then observes the part to see if any bubbles leak from the part, which would indicate a failed test and a potentially defective part. Bubble leak testing takes significant time, is operator dependent, is susceptible to errors, and offers no data collection points. Bubble leak testing is usually a poor method for most leak testing applications, especially with complex systems.

The best leak testing method for a manufacturer depends on a variety of factors: the quantity of parts being tested per hour/shift/day, the number of open orifices on the test part, current quality standards, cost of quality, and many more. Arguably the most important factor in determining the best leak testing solution is the defined leak limits for the product. Leak limits are determined by an engineering team or industry regulations, and ultimately quantify how much a component or system should be allowed to leak. Leak rates are determined by measuring the volume of leak over time, usually through the measure of standard cubic centimeters per minute (SCCM) or standard cub centimeters per second (SCCS). Each testing method offers different sensitivity ranges, spanning from 10-1sccs to 10-9sccs. The accuracy and sensitivity of the leakage requirements will ultimately help manufacturers determine which method is best for their manufacturing process. 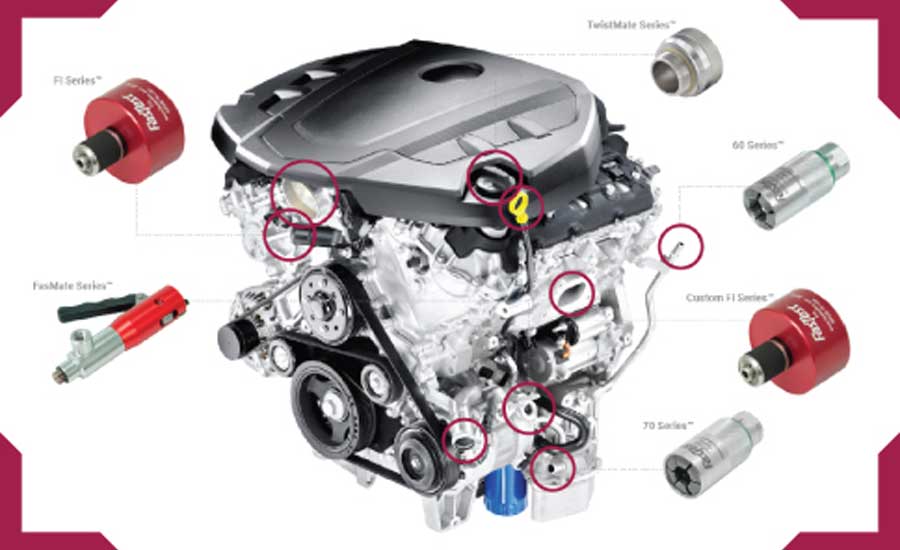 The manufacturing of complex systems—such as an aircraft engine, a rooftop air conditioning unit, or a diesel engine—involves the assembly of dozens of separate components. Many of the components will have been previously tested by the component supplier, however the assembly of these components creates several potential defect points that are identifiable through a leak test. Once the assembly of the system has been finalized, most manufacturers run a main assembly leak test (MALT), usually using pressurized air as the test medium. With a complex system, there are often dozens of potential leak points, which can make the testing process very time consuming and prone to error.

When leak testing complex systems, manufacturers need to estimate total leakage—the cumulative leak rate of the system as a whole. With several different leak points to be tested, and over a dozen different open orifices to seal, it can be very difficult for the manufacturer to create a testing environment that is capable of verifying the quality of the final product. “We hear of manufacturers with warranty claims in the tens of millions of dollars, in part because they have yet to establish an effective leak testing process,” said Mark Spindler, technical director of vehicle systems at FasTest Inc. “Fortunately, we have been able to create a reliable and effective testing process by providing manufacturers with three key recommendations: 1) focus on the test connections and sealing devices, 2) utilize smart connections, and 3) have a single source supplier for sealing and rigging whenever possible.” 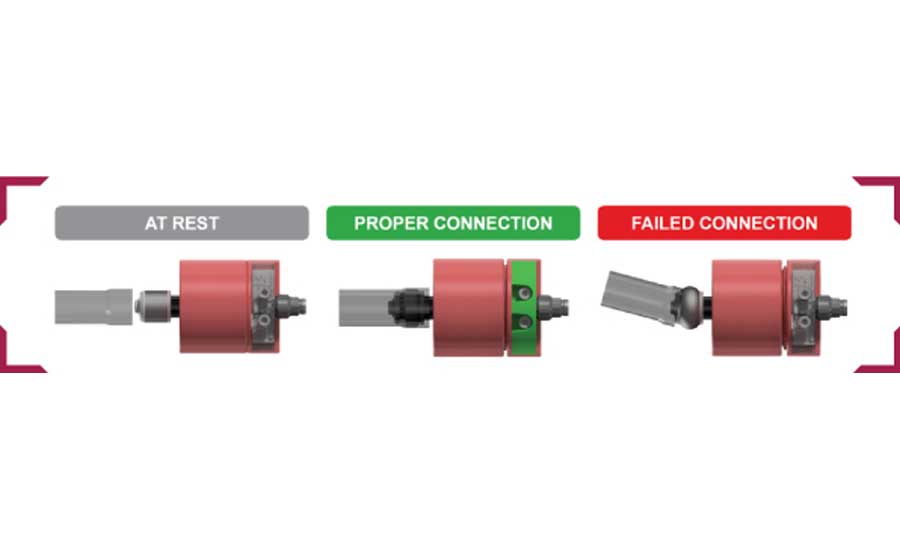 The most important component to a successful leak test is a leak tight connection for all designed ports and holes in the test system.

The most important component to a successful leak test is a leak tight connection for all designed ports and holes in the test system. The ultimate goal is to isolate the component or system being tested. In doing so, manufacturers will know that the leak rate being measured is indicative of the quality of the manufactured part, not the quality of the sealing devices being used to run the test. This applies to any leak test type, and is even more important when testing complex systems. “Take a diesel engine—the system should have a total leakage rate under 100sccm to ensure it has been assembled correctly and that the final product will function as intended,” says Spindler. “What we have seen instead, is that many manufacturers are forced to widen their parameters for a passable leak test—often to 1,000-2,000sccm and beyond.” Without widening the parameters, the leak test will be prone to repeated rework caused by false failures.

A false failure is an incident where a leak test fails, but the component or system being tested is actually leak-free. In short, the product itself isn’t defective, but because the operators aren’t able to effectively seal the system’s open orifices, the leak test fails. This causes immense rework and product scrap, as well as increased warranty claims. “Many of our customers are forced to have very high acceptable leak rates because they haven’t created a leak tight environment to test in,” said Spindler. “Most leak test instruments are very good, and there is very little differentiation between solutions. The real difference in the effectiveness of a leak test comes from the connections and sealing devices being utilized. Without effective sealing, the leak test instrument is essentially useless.” 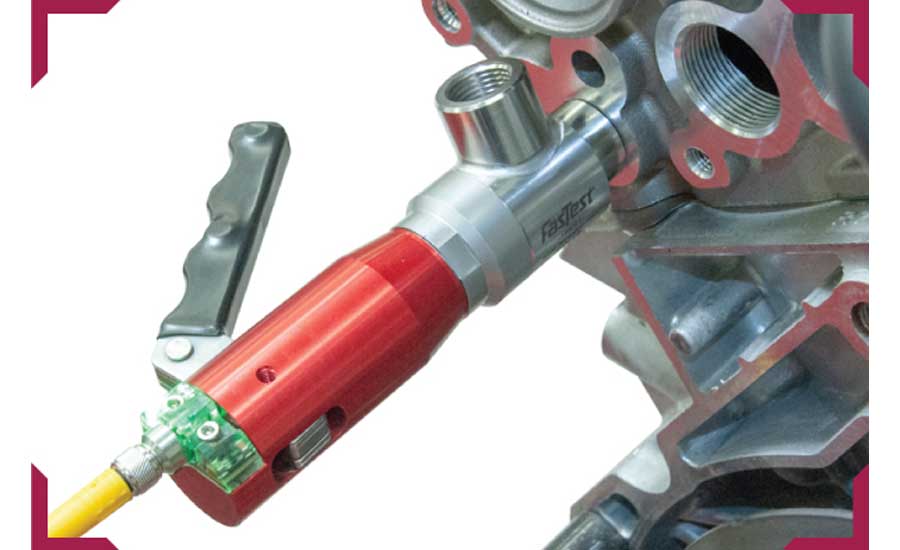 There are many new sealing devices that incorporate smart technologies to help verify leak-free connections and improve leak testing processes.

There are many new sealing devices that incorporate smart technologies to help verify leak-free connections and improve leak testing processes. These smart technologies allow manufacturers to verify the effectiveness of their leak testing processes, ensure proper sealing, and quickly identify any patterns and deviations from the process. “This is really the beginning of an effective root cause analysis process,” said Dustin Sirny, director of advanced technologies at FasTest. “If you can use technologies and data analysis to identify consistent failure points, or components that are leaking too often, you can then make adjustments to your manufacturing and assembly process upstream.”

Additionally, smart connections can provide manufacturers with useful data points such as test times, cycle counts, rigging and derigging times, and much more. “Many manufacturers want more data to work with in general, but more importantly they want actionable data that can improve their processes immediately,” said Sirny. “Data points such as seal placement can help process engineers immediately identify problems in the leak testing process and take specific corrective actions.” 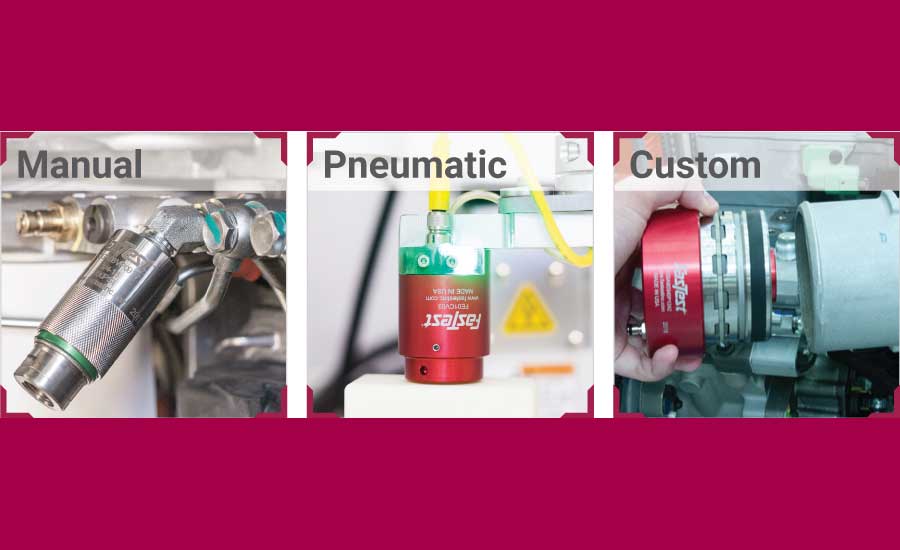 One of the biggest issues faced by manufacturers of systems is creating a leak-free environment to test in.

Recommendation 3: Have a Single Source Supplier for Connections

One of the biggest issues faced by manufacturers of systems is creating a leak-free environment to test in. With faulty or substandard connections and sealing devices, false failures occur and increase the overall cost of quality. Manufacturers can remove these inconsistencies and pain points by using a single source supplier of quick connection tools for their connection and sealing needs. “The most important element to a successful leak testing process is the consistent, reliable sealing of the part being tested,” said Mark Spindler. “We always recommend that our customers use a single source supplier for all the required seals to create accountability in the sealing process.”

When testing a complex system like a diesel engine, as many as 13-18 different openings need to be quickly sealed before a test can be performed; many of these connections require customized sealing solutions to ensure that the total leakage rates meet the stringent quality standards. “It is very difficult to pinpoint the cause of a leak when a false failure occurs,” said Spindler. “The operators know a sealing device has failed to create a leak tight seal, but without further inspection it is very difficult to identify the faulty connection. That’s why we recommend a sole supplier for connection devices—if something goes wrong, you have a resource that you can count on to solve the problem.” A single solution provider for sealing, as well as rigging throughout the test cell, eliminates process variability and increases testing effectiveness and reliability.

Andrew Klobucar is the director of marketing at FasTest Inc. For more information, call (800) 444-2373, email Andrew.Klobucar@fastestinc.com or visit www.fastestinc.com.