Quality Cost: The Number One Reason Companies Are Reshoring

While quality cost remains one of the most common offshore problems, it is often overlooked in sourcing decisions.

Quality is the most frequently cited reason for reshoring manufacturing to the United States. According to the Reshoring Initiative’s 2017 Data Report, quality cost ranked number one as the most frequently mentioned negative factor experienced offshore from 2010 through 2017. Company brand value of having a Made in USA product, a factor directly linked with perceived quality, ranked fourth in the positive domestic factors. Both measures are for reshoring by U.S. headquartered companies and foreign direct investment (FDI) to the U.S. by foreign companies. While quality cost remains one of the most common offshore problems, it is often overlooked in sourcing decisions. Companies too often accept lower product and service quality to save on cost. We will demonstrate that for an increasing percentage of imported products, companies can have domestic quality and availability without impacting profitability.

Putting a quantitative value on quality

It is not easy to measure the actual cost of poor quality. Total cost of ownership (TCO) analysis is an essential tool when establishing a quantitative value on the quality of products from multiple suppliers. When using the Reshoring Initiative’s Total Cost of Ownership Estimator (TCOE), quality cost is represented by the quality/rework/warranty cost factor. Real-world companies using the TCO Estimator estimated their offshore direct quality cost as about 2.5% of purchase price, ranking quality the tenth highest of thirty TCO cost factors analyzed.

Quality extends beyond the product to the whole customer experience. Negative offshore factors such as delivery, supply chain interruption, communication, and loss of control illustrate the service quality deterioration too often present with offshore manufacturing, especially in the low labor cost countries. The high-ranking placed on image/brand under positive domestic factors demonstrates the value consumers place on “Made in USA” goods, thus on the perception of quality. According to a study by Consumer Reports, almost eight out of ten American consumers say they would prefer to buy an American-made product than an imported one. Over sixty percent say they are willing to pay ten percent more for Made in USA. 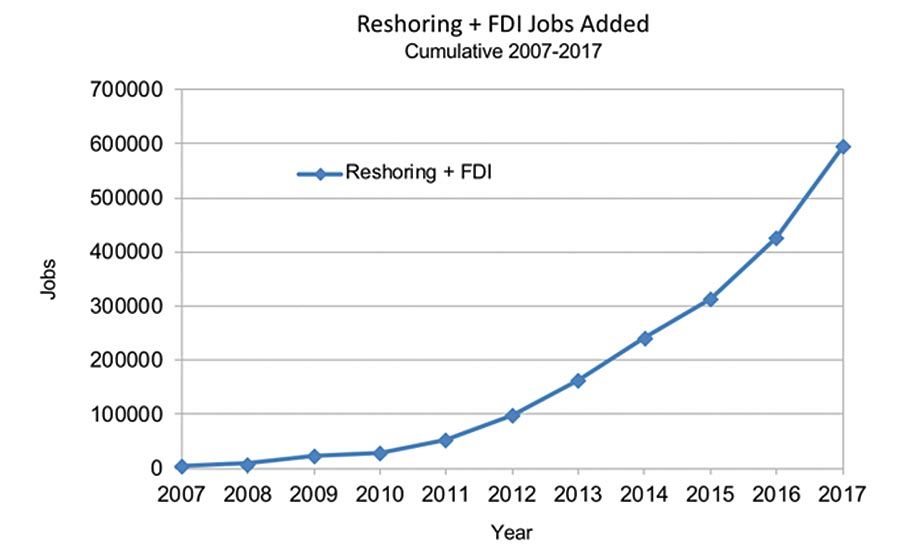 Shifting production/sourcing from offshore to the U.S.

Drivers of reshoring and FDI

Understanding the reasons other companies have given for reshoring is helping companies to determine which of these factors apply to them also. According to one survey, about sixty percent of companies decided to offshore primarily based on comparing wage rates or ex-works prices. Much of the strength of the reshoring trend has been due to companies recognizing a broad range of factors (costs and risks) they had previously ignored. 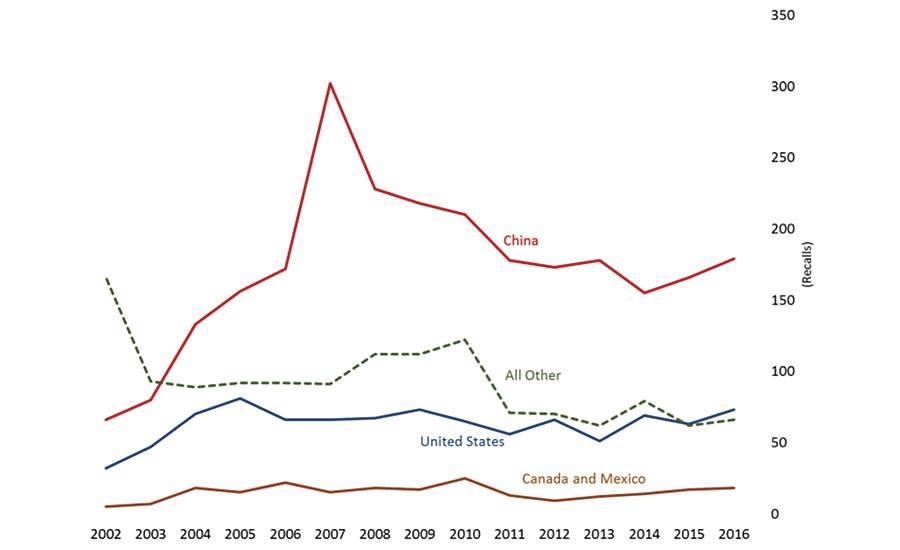 Several trends are driving the shift from offshoring to reshoring: the rising costs of offshore production; the impact of distance on quality, innovation, flexibility, responsiveness, inventory and availability; improved competitiveness via new production technologies; and the increased use of the more sophisticated Total Cost of Ownership (TCO) cost model to quantify the hidden costs and risks of offshoring. Companies are increasingly deciding to use a “local for local” strategy and bring production and sourcing closer to home.

Sourcing/manufacturing in Canada or Mexico is nearshoring, not offshoring. The difference is more than geographic. The high ranking of lead-time and proximity to customers/market often causes nearshoring to be a better choice than offshoring. Nearshoring to North America is also more beneficial to the U.S. than offshoring to China because many of the inputs in nearshored products are American-made.

ACE Clearwater Enterprises, a manufacturer of custom, complex welded assemblies for the aerospace and power generation industries, reshored manufacturing from Hungary and China to Torrance, CA, due to quality control issues overseas. Instead of losing customers to offshore quality issues, they found that customers were willing to pay a little more for high precision quality produced locally. Their decision to reshore created eighty U.S. jobs. 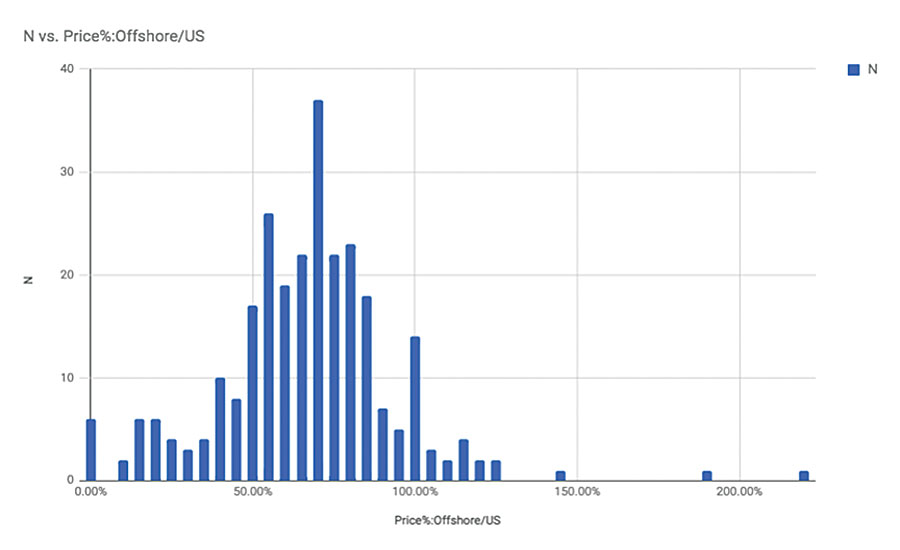 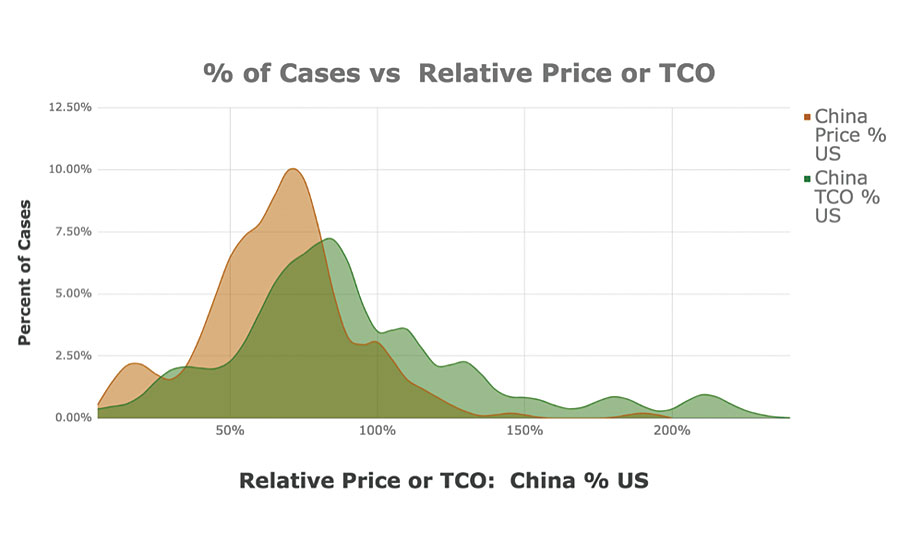 Figures 4 and 5 show the importance of using TCO instead of price in sourcing decisions. Figure 4 shows the distribution of Chinese ex-works price as a percentage of U.S. ex-works price for a broad range of products. The mode or center for the normal distribution is about 72%, demonstrating that we are not often going to win based on price alone. However, roughly half of the product imported from China is within 25-30% of the U.S. ex-works price.

Figure 5, the brown (left) curve, is a smoothed version of the curve shown in Figure 4. The green curve is based on TCO, which averages about 85% of the U.S. TCO. The U.S. goes from almost never winning on price vs. Chinese sources to winning over 25% of the time with TCO.

Brooks Brothers, a brand that has consistently made some of its clothes in the U.S. since 1818, reshored seventy percent of suits from offshore locations to the U.S. due to rising wages, quality issues and lead-time. Reshoring increased employment from about 300 to 530 workers at their Haverhill, MA, plant.

Insulet, a medical device manufacturer based in Billerica, MA, has operated a facility in China since 2012. When they decided to expand, they invested $100-million in a U.S. facility in Acton, MA. They reported quality, rework, warranty and rising offshore wages as the negative factors offshore. Automation/technology, improvement in customer responsiveness, lead-time and proximity to customers were given as reasons for reshoring.

Another quantified measure of quality is the frequency of recalls. Sourcing or producing locally helps to reduce product quality risks and increase flexibility in customer responsiveness. The Consumer Product Safety Commission (CPSC) publishes a listing of recalls by country of manufacture and year. ACETool, a U.S. Commerce Department website, shows the number of U.S. recalls based on country of origin for the U.S. and for some of our major trading partners. Recall notices of Chinese-made consumer goods between 2002 and 2016 have grown substantially from 58 in 2002 to 179 in 2016, after peaking at 302 in 2007. In contrast, there were just 73 recall notices of U.S.-made consumer goods in 2016. Since each country’s share of goods sold has changed over the years, it is helpful to adjust for volume. Recalled goods for every $100 of goods sold in the U.S. in 2014 were $0.64 for Chinese goods, about six times the rate of $0.11 for U.S. goods.

Our user data shows that, under current conditions, if companies use the TCO Estimator instead of price to make their decisions, they can reshore more than 25% of what they have offshored and improve their profitability. The TCO Estimator typically closes a 15% to 20% price gap, but some companies find that the analysis is worthwhile even if the gap is as much as 50%.

How your Quality Department can help

Sandy Montalbano is a consultant to the Reshoring Initiative. For more information, (847) 867-1144, or visit www.reshorenow.org.

Harry Moser is the founder and president of the Reshoring Initiative. For more information, visit www.reshorenow.org.

ROMJ and Reshoring Initiative Cooperating to Bring Back One Million Jobs

Understanding How Management Involvement Impacts the Risk of Quality Cost