When several devices need to be accurately sequenced in a machine vision system, the usual solution was to program a PLC to generate the necessary signals. However, a PLC is a significant investment and requires specialist knowledge to program the Relay Ladder Logic. A dedicated timing controller can save significant engineering effort by performing the same high-performance logic via an easy-to-use interface. Configuration is greatly simplified and this dedicated control technology allows sophisticated and innovative imaging sequences to be created with response times far exceeding the performance of standard PLCs.

Automated machine vision production line inspection solutions can require high speed synchronization and sequencing of machine vision components through flexible triggering of lights, lighting controllers, cameras, proximity sensors, switches, encoders and reject gates. Events must occur within a prescribed latency and determinism. The basic requirement for conveyor belt imaging is that the system senses when the product is underneath the camera, the camera exposure is triggered to record an image, the image is processed accordingly and a pass/fail decision made, and any product that fails is removed from the line at a reject gate. For accurate timing of component sensing, camera triggering and reject gates, timing can be based on precise delays or on exact conveyor belt travel using an encoder. Triggers can be based on timed delays, if the movement of the conveyor belt is uniform, or according to the speed of the conveyor via an encoder input.

The encoder outputs timing pulses each time the material being inspected moves a certain distance. Multiple cameras can be triggered at different times with the duration of the trigger signal controlling the illumination time and camera exposure time. In systems with varying timings or conveyor speeds, the encoder enables exact synchronization with the speed of the conveyor belt. Pulse direction counting allows for the conveyor to be stopped or even run backwards (for example to clear a blockage in another part of the system) while maintaining position to guarantee proper reject timing. By synchronizing the item to the initial ‘component present’ sensor, inspection pass/fail results can be synchronized to the reject gate so that the correct part can be rejected even with multiple parts between the cameras and the reject gates.

It is possible to individually trigger multiple lights at different intensities and durations in a predefined sequence from one trigger signal. This is known as the pulse burst mode and allows different features to be highlighted in different images and multiple measurements to be made using a single camera station instead of needing multiple cameras. This can reduce the mechanical complexity and saves money by needing less equipment. The configuration is illustrated in Figure 1 and the timing diagram is shown in Figure 2. Multiple outputs are required from one trigger signal, so here a sensor on IP1 detects product presence. In this example, the four images need to be taken from the camera at 40ms intervals using four different lights. OP1, OP2, OP3, OP4 are used to output triggers to the lights and OP5 is used to trigger the camera. OP1 to OP4 are pulsed for 40ms in sequence. As each one is pulsed, OP5 is also pulsed for a short time to trigger the camera. The effects of this mode of operation can be seen in Figure 3 which shows images of the same component taken sequentially using a single camera with three different illumination sources. The image optimized for the barcode is produced using a ring light; the surface defect image is produced using dark field illumination and, finally, an on-axis, bright light is used for a dimensional check on the component. 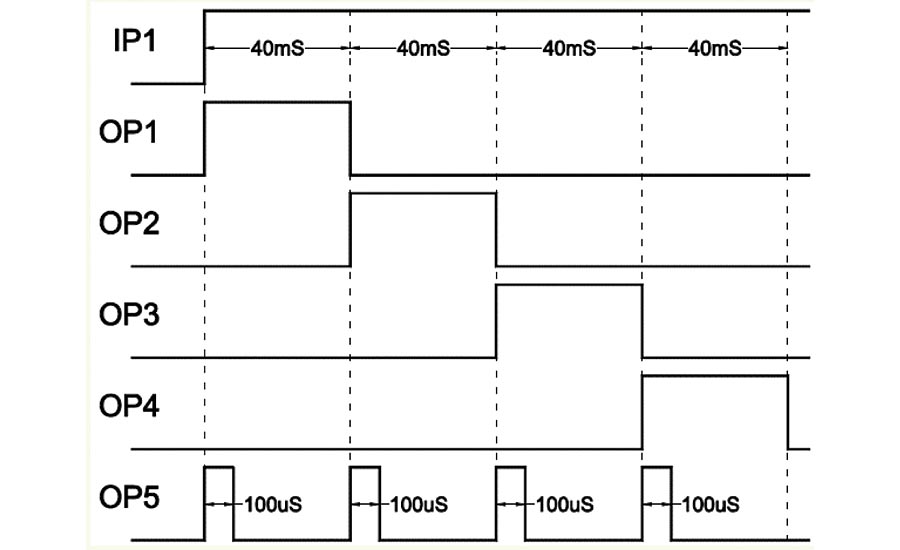 Sequencing is also important in the technique of computational imaging, where a series of images of an object is acquired using different illumination conditions. These images are then processed and combined to produce a composite image to reveal detail that cannot be seen in the original images. An example of computational imaging on processed metal components involves illuminating the components sequentially by four different lights from different directions (for example using a segmented dome light). The resultant images are processed and combined to remove the effect of random reflections that may arise from different surface treatments such as milling, turning, grinding, punching or stamping, so that any surface defects can be revealed.

The examples of multi-lighting schemes discussed so far have involved area scan cameras, but the principle can also be applied to line scan cameras. Using line scan cameras, multiple views of an object can be acquired during a single scan by capturing information from different illumination sources on sequential lines and the individual images extracted using image processing software. There are a variety of interesting topologies using two or more line lights and a single line scan camera, which allow various imaging schemes. A two light system could feature a standard line light and darkfield light. The system shown in Figure 4 is set up so that light A is triggered for the odd lines and light B is triggered for the even lines. 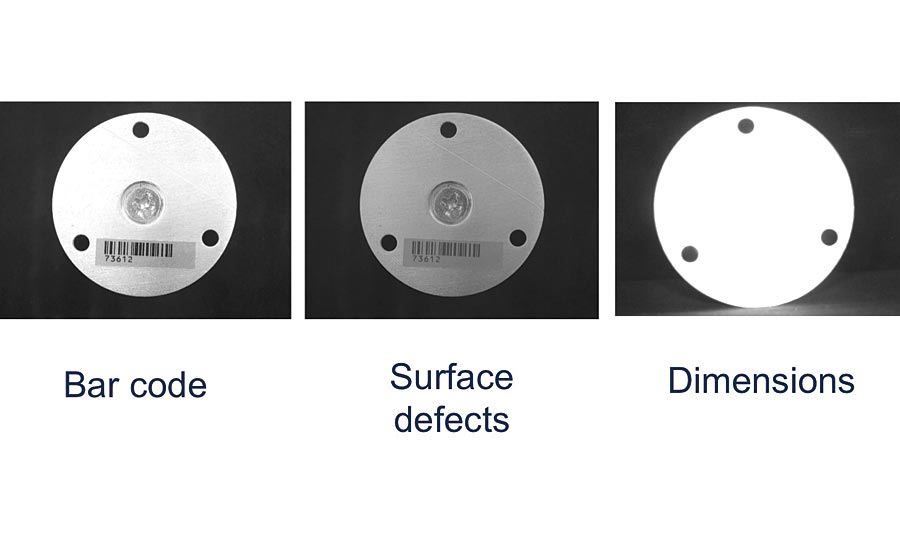 On each step the light can be on, off or pulsed for a shorter time to reduce its effective brightness. The result is a line scan image where the bright field and dark field images are interleaved. The two images can be extracted by an image processing package to give two independent images. For transparent product, such as glass, one of the lights could be replaced by a backlight shining through the glass. Accurate timing control is necessary to ensure that the lines don’t get one out of step. If the system is putting a bright field image on the even lines and a dark field image on the odd lines and the lines somehow get out of step by one then the dark field image will be now be on the even lines. This would present problems for the image processing software unless it can auto detect which line is which.

This configuration saves a lot of cost without losing resolution as long as the light can be driven with enough current and at a high enough frequency. This technique can also be used with three or more lights. The increased line speed available in line scan cameras makes this more feasible than it was before as this can now be done without losing resolution in the direction of motion or slowing down the line. For example an eight light system can be used for the inspection of printed film. Four independent images can be created using a single line scan camera to check for print quality, surface defects from different directions and for holes. 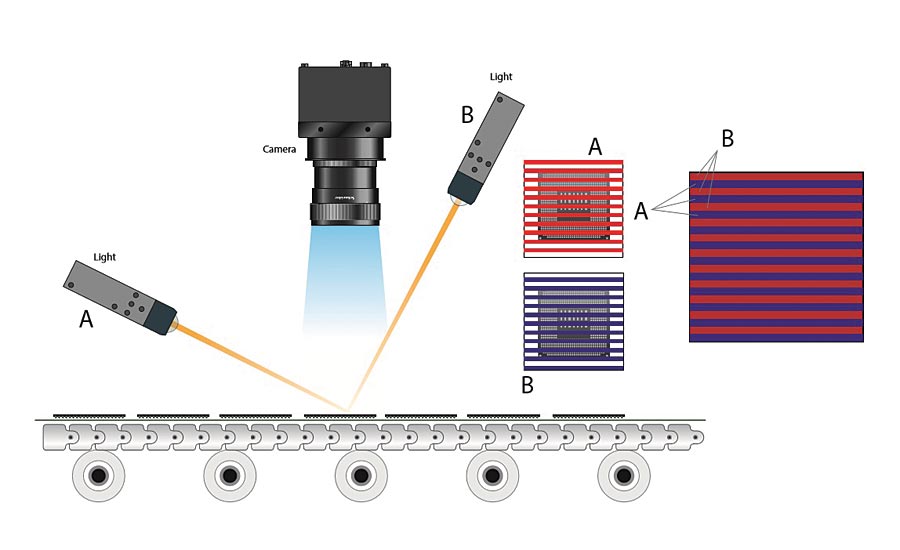 To provide the flexibility needed for sophisticated sequencing, a dedicated timing controller needs to have multiple inputs and outputs to allow high speed triggering and have good connectivity. Since the timing of Ethernet messages can vary, a controller would allow local digital signals to be accurately controlled by the remote PC. It should be quickly and easily configured using the software supplied, by accessing the controller via an internet browser or using third party software. V&S

When in doubt, try solving with a profile sensor first and then escalating to a smart camera.