The machine vision system is only as good as its lens.

The temptation when choosing a lens for a machine vision system is to want more of everything—resolution, field of view, temperature range—because the system is only as good as its lens. Unfortunately, increasing lens performance usually increases one or more of size, weight, and cost. This article examines some tradeoffs encountered when choosing a lens, then considers when a custom-designed lens might be the right choice.

For purposes of this article, the following definitions apply:

The arrows in the table on the previous page shows the change in size, weight, and cost of a lens that one should expect when the parameter in the far-left column is increased, with all other parameters held equal. A zero indicates no significant change. If a parameter in the left column were decreased, then the arrows in that row would reverse direction while the zeros would remain zeros.

Two caveats apply: First, these tendencies are rules-of-thumb, not absolutes. Exceptions exist, especially when a clever designer looks for them. Second, it is rare that only one parameter at a time would be changed and all others held equal. A change to a lens design would usually include changes to multiple parameters at the same time. 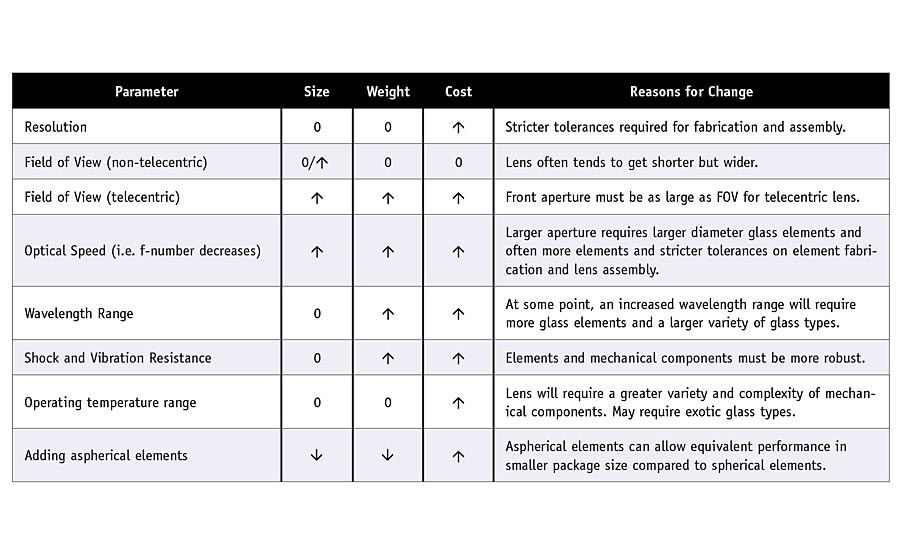 Designers of catalog lenses try to balance these performance and expense trade-offs in a way that works for a range of applications. The customer must then search for the best available combination of performance, size, weight, and cost.

Particularly demanding applications may justify a custom lens. A good designer can help ensure that a customer pays for the performance he or she wants without also paying for performance that is not needed.

Catalog lenses will always be cheaper than custom lenses, but for some combinations of performance requirements and production quantities a custom lens will be a better value. Specifications such as constrained size, light weight, ruggedness, extended wavelength range, or low distortion may justify a custom lens. V&S