If you ever get a chance to watch an aircraft being built, take it. Walking through the aircraft hangar at Northrop Grumman’s Palmdale, CA, facility, you will see two unmanned aircraft, each with a 130-foot wingspan, parked behind yellow tape. The scale of the aircraft and the desert setting make it feel like a movie set.

While the aircraft are impressive—and massive—so is the location. Air Force Base Plant 42, which is also home to Lockheed Martin, Boeing, and NASA, is so large that getting to another location involves a 15-minute drive. 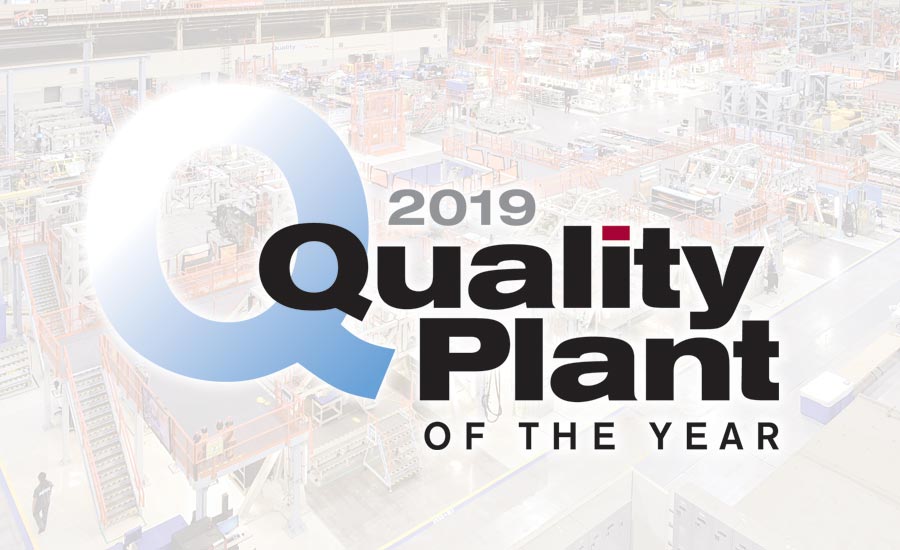 Here Northrop Grumman provides assembly, integration, testing and maintenance for aircraft such as the B-2 Spirit, F-35 Lightning II and High Altitude-Long Endurance (HALE) systems, like the RQ-4 Global Hawk. Teamwork is important in this mission. As Deb Andree, vice president of mission assurance, says, “No one builds an F-35 by themselves.”

The focus is on quality from the very beginning, she says, and it’s built into the design of the product. For this focus on quality, Northrop Grumman’s Palmdale Aircraft Integration Center of Excellence earned the top spot as our 2019 Quality Plant of the Year.

Surrounded by mountains and scruffy palm trees, the Antelope Valley is home to innovative work in the aerospace industry.

After a shuttle bus ride from the site entrance, we arrive at Site 7, where the Triton aircraft is produced. The Triton gets started in Mississippi, the wings are trucked in from Texas, and the Northrop Grumman Palmdale team takes it from there.

The enormous hangar faces the mountains and open sky. Northrop Grumman makes the buildings fit the aircraft, rather than the other way around. The flow of production incorporates the movement of the aircraft; for example, to weigh it, scales are built into the hangar floor. 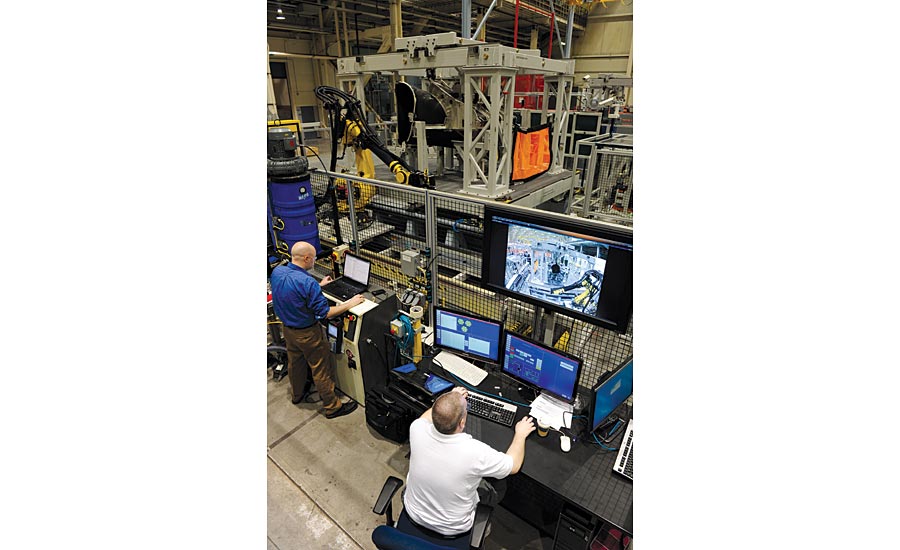 The one-piece, 130-feet long composite-based wings hold fuel. This allows the unmanned aircraft, which can reach 50,000 feet, to be in the air for 24 hours. The company makes variations for both the Air Force and Navy, and they have an additional bay for future growth.

In addition to the Triton, at any given time the Palmdale site may have 85 F-35s in production, a significant jump from last year. It took just ten months to cut the three days of production in half. “Every 36 manufacturing hours, the team delivers one of the fuselages to one of three locations,” says Cory Carruth, vice president and site lead of the Palmdale Aircraft Integration Center of Excellence. From there, the units go to Texas, Italy and Japan. The United States and its allies—right now the customer base is about 45% international—depend on this aircraft. And Northrop Grumman does not take this mission lightly.

“Quality is one of our core values,” says Andree. “It’s not just on the back of our badge—it’s in everything we do.” 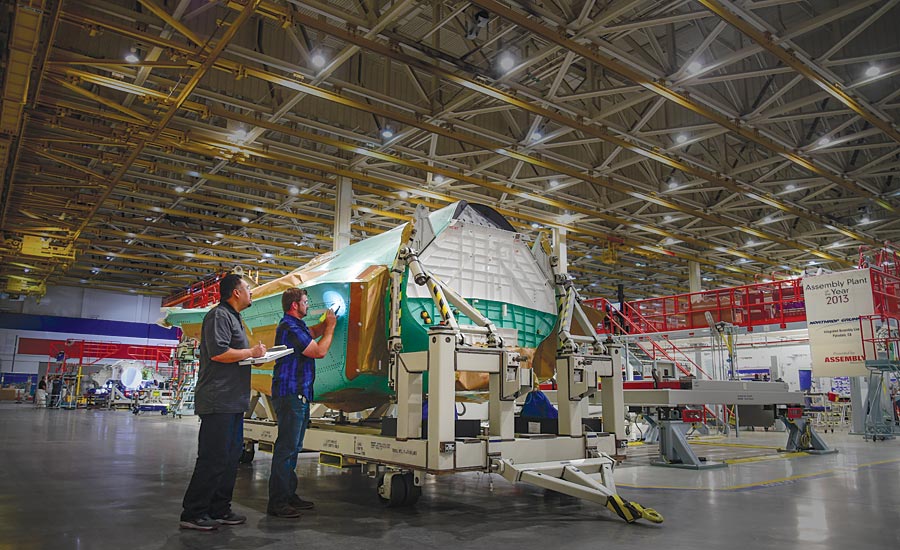 Northrop Grumman builds the center fuselage of the F-35, the section behind the cockpit, which is 18% of the vehicle content. This center fuselage section calls for several variations, such as the Air Force variant. The fast moving line is agile enough to handle change, and accurate to very tight tolerances.

Not only does the company produce sections for highly sophisticated aircraft, they have automated much of the process as well. The robotic drilling system works with a vision system to drill about 300 to 400 holes in each inlet. Previously, a technician would be inside the duct, which made it difficult to maintain the rate of production, not to mention lugging a tool inside a sensitive piece of equipment. Instead of the manual process to inspect every hole, now machines inspect and collect data.

“Automation set us free,” Andree says. “Now we can focus, instead of detailed inspection, we can look at data and data trends. Before we might have had 15 different data points from multiple systems. Now we can collect that data and act on it.”

“It would be very difficult to go back,” Carruth says.

The fuselage is built from the inside out. As we walked the production line, the tooling moves along with the airplane into each section. This means less opportunities for problems to crop up.

At the end of the long aisle, two major sections come together with very tight tolerances. The units match, despite the vast distance in the supply chain.

Monitors display the view from a camera that is set up to see what the operator sees. In addition, there is a monthly quality bulletin written regarding the F-35. 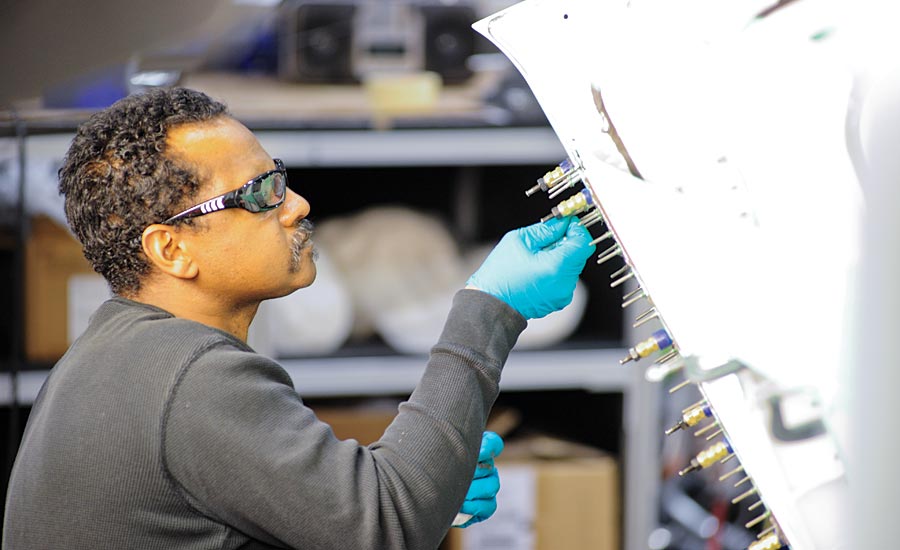 Next is a projection system that highlights holes and tolerance levels. The laser tracker software provides trending data, and in the case of problems, initiates a corrective action back to the original machine. Two staff members demonstrate how a laser tracker scans the outside of the fuselage and then explain the next phase of the technology, smiling the whole time.

Quality must be designed in, Andree says—and then must continue throughout all aspects of the process.

This approach is working. Their customer, the Defense Contract Management Agency, checks the units at the end of the process. Based on the team’s performance, Carruth notes that DCMA has switched to a sampling inspection plan rather than every unit—proof of the company’s demonstrated success.

The Joy of Quality

While the technology is impressive, management stresses the importance of the people as well. The company recognizes staff who have done something noteworthy in terms of quality. For example, this can be something along the lines of raising your hand when you see a problem. “At many places that goes unrecognized,” says Andree.

Supplier quality is also a priority. The company tracks supplier quality the same way they track themselves, notes Andree. If issues crop up, they require suppliers to perform a root cause corrective action. And if these continue, they ask for a quality plan to fix the issue.

But despite the best efforts, occasionally things do go wrong. Andree, who has been with the company for 39 years and recently moved from Florida to California, recalled a time there was a quality problem. “The customer was aware. Leadership was aware,” she recalls. Immediately everyone went to work to address it, “leaving their day jobs,” as she put it, to find a solution. This couldn’t happen without management involvement. They drilled down and did a robust root cause corrective action and solved the issue.

The quality team is part of the process, she stresses. When a production manager comes the Quality team and acknowledges that something happened and they want to fix it, the team is glad to be part of the solution—rather than being the quality cop writing tickets. If production asks for a root cause corrective action, they are even more pleased and the Quality process is working.

“Nothing brings me greater joy than having a floor manager say ‘I need this,’” Andree says. “A robust root cause corrective action is our biggest thing.” 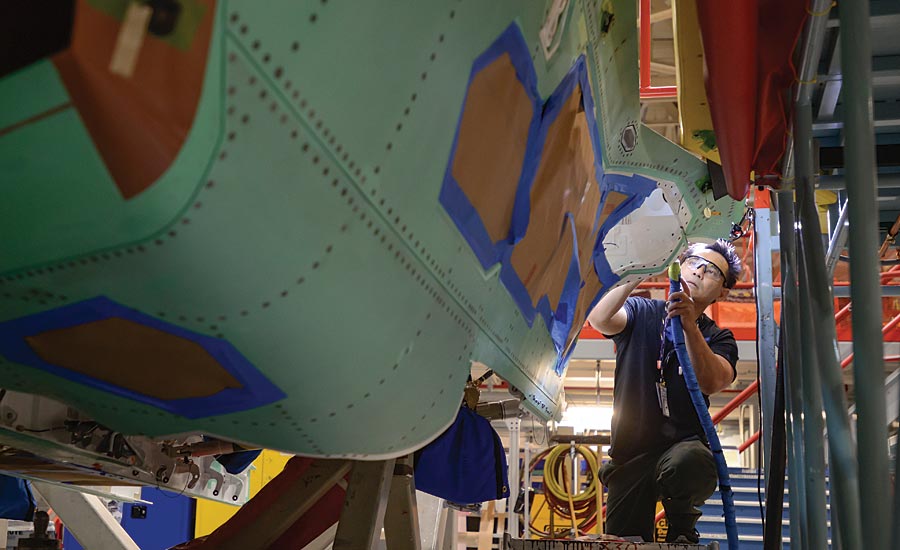 Capabilities at Palmdale include assembly, metrology, nondestructive testing, and automated and robotic technology, among others. While many of these skills, such as NDT, require specialized training, the company is also heavily involved in recruiting the next generation of Northrop Grumman. They partner with the Antelope Valley College as well as local high schools to promote STEM education. Technicians talk to high school students about the high-tech, high-skilled jobs available in the industry. In addition, they offer apprenticeship programs.

And of course, training continues once they join the company. By having staff trained in various positions, it’s possible to move staff to different product lines and increase flexibility.

Community outreach is another priority. Corporate citizenship has a large impact on the Palmdale site; various programs may even have fundraising lunches, which means the tacos that you buy could be raising money for multiple sclerosis research, for example.

The work is challenging and begins early—for the first shift, this means a 4:42 a.m. start time—but the staff are united by the bigger picture involved in their work. Supporting the United States and its allies in humanitarian and wartime missions is not something to take lightly. The organization continues to seek out improvements and find ways to make these aircraft better. Quality is nonnegotiable. Q