It is a cold hard fact that steel production in Europe can hardly be made economically viable unless manufacturing facilities use the very latest equipment and technology. And there is no alternative to operating 24/7. So it is clear that the number of stoppages has to be kept to an absolute minimum, and, when unavoidable, must be as short as possible. At Tata Steel, the change management and version control software versiondog has become a proven and effective means of combating downtime and increasing production costs.

Tata Steel is one of the world’s most geographically diversified steel producers, with manufacturing plants in 26 countries and commercial operations in more than 35 countries. In Europe, it is the second largest steel maker.

Its production facilities not only employ cutting-edge technology in all areas, but extremely close attention is paid to life-cycle costs. There is virtually no other way to manufacture steel competitively in Europe. Also indispensable is a maintenance department that is able to react quickly when necessary, and is as technologically up-to-the-minute as the production plants.

The versiondog change management and version control software has played a key role at Tata Steel for some time now. It was first used by the company in 2011 at its Ijmuiden plant in the Netherlands. At the time, this kind of software was not completely new to the company. Since 2005, they had been using a version control product called VersionWorks that was then being distributed by the Dutch version control specialist, Agilitec BV. After support for VersionWorks was discontinued in 2010, Agilitec and AUVESY decided to enter into cooperation. Agilitec has been the versiondog distributor for the Benelux countries ever since.

In the Netherlands, as in other countries, Tata Steel is structured into decentralized business units that each have their own product groups and production facilities. They could be cold rolling plants, for example, or hot rolling plants.

“After the switch to versiondog, we approached all Tata units in the Netherlands in order to tell them about versiondog. That’s how we came into contact with the central service group HTD,” recounts Yme Bosma, CEO of Agilitec BV.

HTD (Hoogoven Technische Dienst – Eng: technical service) is the internal service provider for the maintenance departments of Tata Steel’s business units. They quickly recognized the benefits of versiondog and soon became highly enthusiastic about the system. The software has been made available on the central network to individual business units. They can choose to take advantage of versiondog on a subscription basis. In order to increase the maximum number of components, the versiondog system is currently set to be upgraded to a parallel server system. 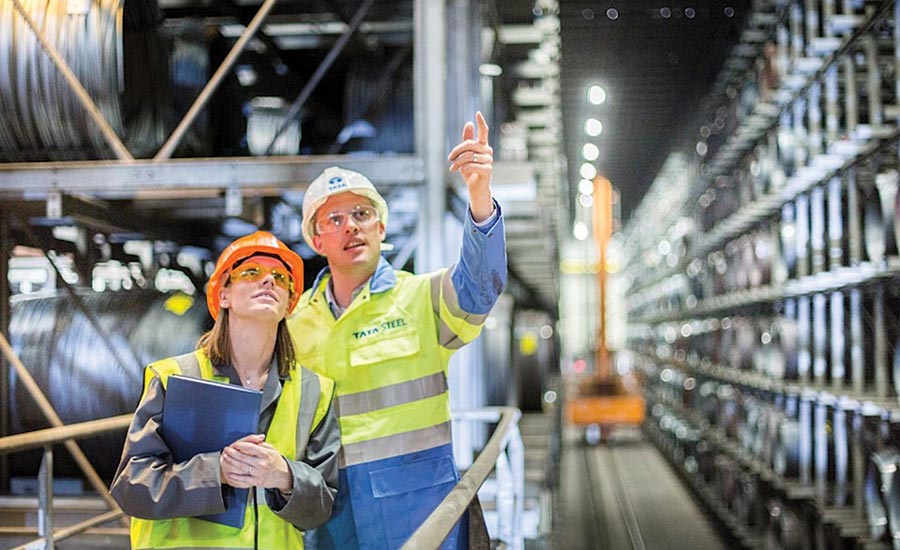 Last year, Tata Steel Europe produced 10 million tons of steel and generated a turnover of €7.9 billion. Nearly all production processes at Ijmuiden are continual and need to be kept running 24/7, so avoiding downtime is a top priority.

That’s a big part of the reason why versiondog is in use across the board there, on all production lines. But because Tata Steel business units have a high degree of autonomy, the way individual units use versiondog varies considerably. “That’s because different units are involved in different kinds of production,” explains Hassan El Haddad, technical automation specialist at HTD. “But despite that, they still all use versiondog, and that just shows how flexible the system is. The fact that there are no rules set centrally also tends to lead to different units using versiondog in different ways. How they use the software is up to each individual unit. But part of the essence of versiondog is that you never lose any data,” he adds, “and you always document all changes, so there is no real need to impose any bureaucracy on the system.”

There are 18 units and around 200 users with access to versiondog. Hassan El Haddad and René Blaauw, as two of the system administrators, are able to centrally monitor and manage some 3,000 versiondog components. The number of backups being made of device control programs is steadily growing. Depending on the needs in each particular production area, some are made daily, some weekly and some monthly. Around 150 backups of the more critical equipment are made every day. When new machinery is installed, backups are initially made more frequently. When it is confirmed that everything is running smoothly and reliably, the interval can be extended. Fortunately, setting up and changing backup jobs in versiondog is a very straightforward process.

“In the past, we used to make backups for the sake of making backups,” recalls El Haddad. “With the number of devices we have, that was a huge waste of time. Now our teams know when a change has been made and when a backup is necessary.”

Some of the units back up their networked devices automatically. Others do so manually because they have a lot of stand-alone machinery, hence devices that are not networked. One of the many advantages of the versiondog system is that it supports both automatic and manual backup routines equally well. Plus there are units for which adhering to the “Management of Change Protocol” and registering each and every change is extremely important. HTD at Tata Steel believes: “However versiondog is used, the benefits are the same; we always know who changed what and why. Centralized documentation of changes is of tremendous value.”

Whenever versiondog is rolled out to new users, the team always pays a lot of attention to the security of the network. Satisfying the various security requirements of different production plants is another area in which this software offers a high degree of flexibility. HTD can easily grant and manage access rights centrally, according to the needs and wishes of each individual unit. An advantage of this is that if a unit is subsequently reorganized, the system administrator does not need to be called in to deal with access rights. A number of external contractors have also been granted access to the versiondog system so that they can check-in projects themselves. The fact that the maintenance technicians are happy to allow this shows how much they trust the system. Justifiably so, because all changes made by contractors can be easily viewed and approved. And if a change still doesn’t produce the desired result, the previous version can be quickly restored to the device. 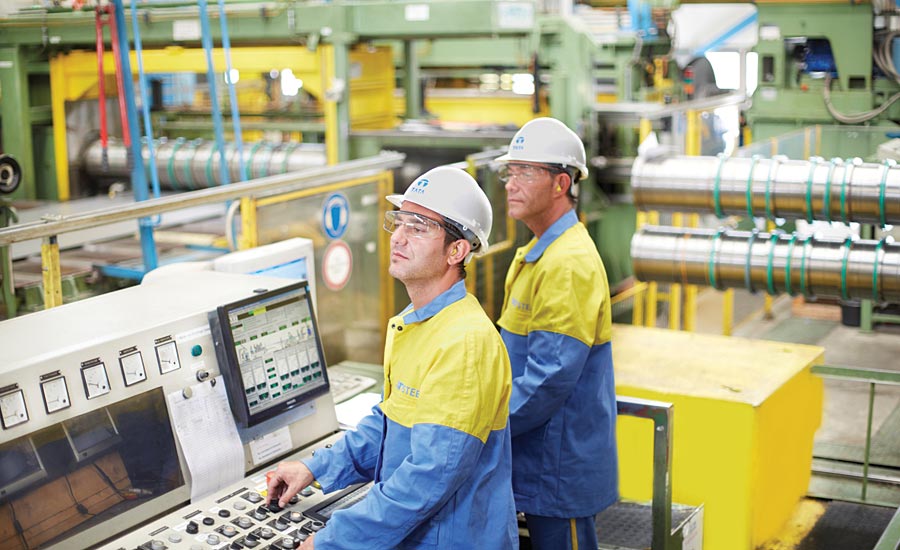 Better teamwork: versiondog centralizes project and device data and provides end-to-end change management—users can always see who changed what, where and when. © Tata Steel Europe

HTD emphasises one very important advantage: “With versiondog, we always know the current status of our production plants. versiondog makes our work easier and saves us time.” Central data storage, easily comprehensible documentation of all changes and SmartCompare (i.e. graphical or text-based detail comparisons of versions) all lead to vastly improved clarity and certainty.

Hassan El Haddad couldn’t say exactly how much time Tata Steel saves: “Yes, that’s something that our management would also like to know,” he says, “but it is as difficult to quantify in euros and cents as is the benefit of having a smartphone.” He goes on to explain how a substantial improvement in their work comes from knowing the condition of the production equipment. That makes proactive preventative maintenance much easier: “The more we know about our machinery, the better we are able to maintain it. What’s more, we have more data available for analysis, and we can use that to improve our processes. That’s what the Industrial Internet of Things is going to be about, but for us it is here today.” The main goal was to reduce downtime, and that has been achieved. “We now know exactly which version of any control program is the one currently in use, we don’t just think we know which one it is.”

The system administrators are now exploring the possibilities offered by the new features and options in versiondog 6.0. As experienced users, they can quickly appreciate the new features that they regularly discover and that promise great benefits and are keen to make them available to the users.

They are particularly enthusiastic about the new SAP interface. As the maintenance department already manages equipment data with SAP, automated integration of production plant data into versiondog would be a valuable cross-system benefit.

Tata Steel is no different to many other companies in that the staff initially regarded the introduction of versiondog with a degree of skepticism. “Since then, though, our work culture has changed.” That might sound like quite an assertion, but Hassan El Haddad is adamant: “We now approach problems and tasks differently. Our people now primarily see the opportunities that change offers, and not just the risks. They appreciate the workload reduction, smooth workflow and the certainty that versiondog provides. That is why versiondog is not simply a tool, it has become a core element of our maintenance culture.” Some people had been doing their jobs more or less the same way for more than twenty years. Now new possibilities have suddenly been opened up and attention is being focused toward areas where there is much to be gained. For many, it has been a transformation. Backups, plant monitoring, information for planners and engineers—the AUVESY software is even involved in data management for the production plant power supplies. And these plants contain machinery that uses a lot of energy!

The way tasks are now approached in maintenance has resulted in a broader change in attitudes toward innovation. “Sharing more means learning more” is the principle. Readiness to exchange information about problems in production depends on the degree of desire to learn from one another as a team. The web-based versiondog Factory Floor Status is used a great deal in this context. This useful add-on gives staff ready access to additional information and KPIs concerning jobs and components.

Hassan El Haddad summarizes, “If you want to minimize downtime or avoid it altogether, it is not enough to just think you know which version should be the right version of your control program project. versiondog gives you end-to-end clarity on what changes have been made. You can’t get better quality than that!”

Robert Glaser is the CEO of AUVESY Inc. For more information, email info@auvesy.com or visit AUVESY.us.