Offset measurements away from the machine tool boost manufacturing efficiency.

Mold and tool makers are under pressure to reduce their throughput times and unit costs in order to stay in business. How much of a competitive edge do companies enjoy with a zero-point clamping system and a measuring machine? The CEO of WESCHU GmbH ran the numbers.

Standing in front of a ZEISS Contura in the middle of his demo center, Werner Schumacher says, “My ZEISS measuring machines truly do make me money.” Although two of his staff members have heard that sentence numerous times before, they still nod their heads in agreement. The CEO of WESCHU GmbH und Co. KG, headquartered in Nuremberg, Germany, frequently takes potential customers through the large modern building featuring two automated manufacturing cells with multiple milling, erosion and measuring machines. “Here customers can see for themselves how efficient they could be,” says the 73-year-old manager Schumacher. This explains why he and his daughter opted to invest three million euros to construct the demo center.

The CEO has been in this business for 40 years. He gets straight to the point: “Whoever presets workpieces and electrodes on an expensive erosion machine rather than a measuring machine will be out of business sooner or later.” Why? Schumacher explains that, by performing the presets on the expensive production machine, it is only possible to achieve up to 1,500 erosion hours annually.

Kathrin Schumacher, the other CEO and company owner, knows that company representatives who take the time to verify Schumacher‘s calculations and add up the amount of time their machines are actually used for eroding or milling will be “astonished.” Experience has shown that using a machine for production time for more than six hours a day is a rarity. Given such poor machine utilization, Schumacher believes this costs firms over 60 euros per hour, expenses which are then passed on to the customer. Instead of making profit, the companies’ losses pile up. Based on Schumacher‘s assumptions, these can total thousands of euros—per year and machine.

Here, the two Schumachers are in complete agreement: “Whoever just tries to carry on like everything‘s fine is throwing money out the window. They keep doing this until there‘s no other choice but to close their company.” While Ms. Schumacher does not have specific data detailing company closures, she estimates that, within the last 10 years, around half of the mold and tool manufacturers in the Nuremberg region have gone out of business.

“But things don‘t have to end this way,” emphasizes Ms. Schumacher. For her, there is simply no question that even companies in high-wage countries like Germany can turn a profit by making moderate investments. Both father and daughter recommend that those mold and tool manufacturers with small lot sizes start optimizing their processes by purchasing a zero-point clamping system for around 15,000 euros as basic equipment.

This enables employees to fixture workpieces and electrodes away from the tool machine, reducing the setup time even if the presets are performed on the manufacturing machine itself. According to Schumacher’s calculations, the zero-point clamping system alone increases the overall amount of time the machine is in use. One reason: employees can fixture workpieces that are difficult to machine or clamp multiple workpieces at the same time. By aligning these in the machine shortly before the end of their shift, the components can be processed overnight without personnel.

Even with the zero-point clamping system, the measurement on the machine still takes a lot of time—a strong argument for performing the position of workpieces is to do the measurement external on a measuring system. The measuring machine then transfers the offset data directly to the machine tool and the job manager. Then the employee or, in some cases, the robot just needs to move the pallet with the workpiece from the measuring system in the tool machine. 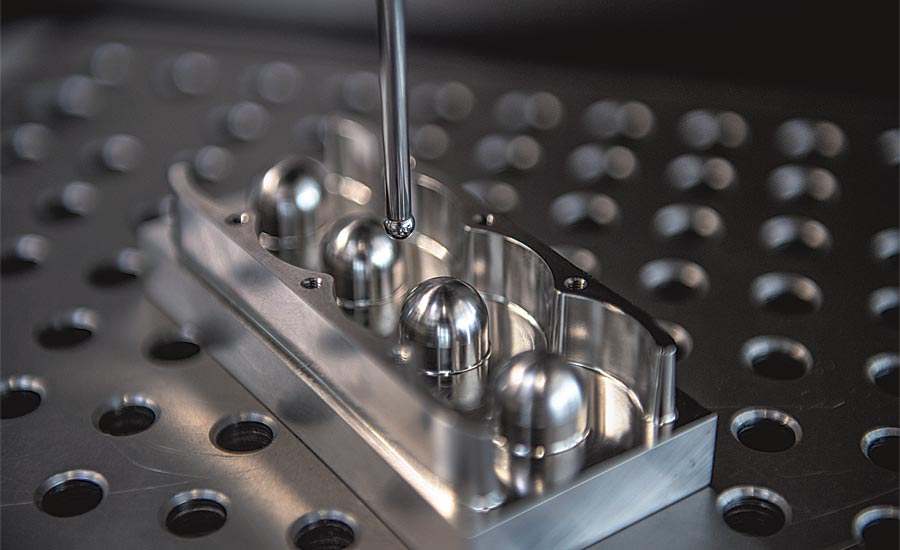 According to Schumacher, the measuring system pays for itself after just six months. Investigations from ZEISS also indicate that adding a measuring machine almost doubles the production time for a machine tool, while reducing the manufacturing costs and the costs per component by up to 40 percent. And that is not all. Fewer machine tools are required to produce the same number of parts.

Another persuasive argument: the measurement on a measuring system is more precise, and it makes quality information available. At WESCHU and its subsidiary for contract manufacturing, Innovative Metall Technologien GmbH (IMT), the workpieces are measured fully automated on a ZEISS measuring machine and controlled against its data after each production step. Only the ‘good’ components are machined further. “This way, we avoid wasting a lot of time and energy on scrappage,” explains Ms. Schumacher. This is another factor that significantly increases companies’ competitiveness. 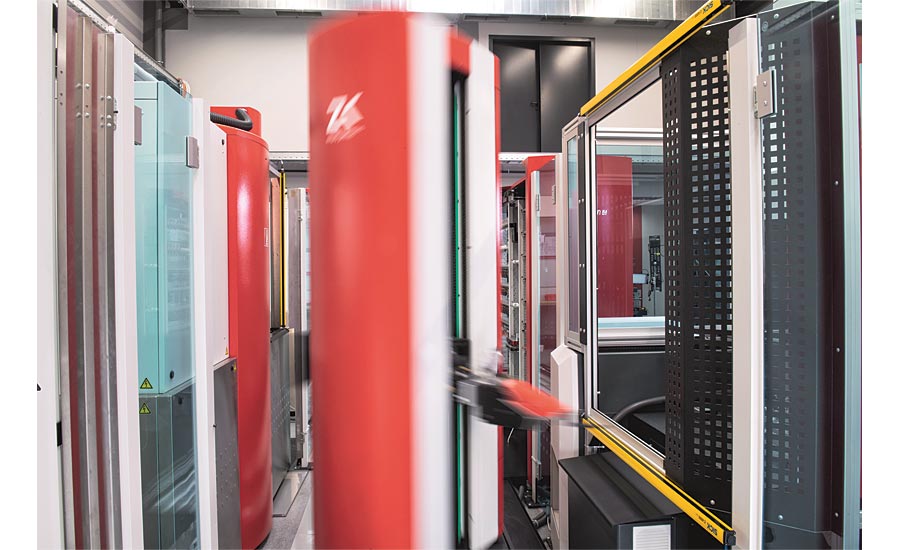 The Chameleon, an automated solution from the company Zimmer & Kreim, enables the automatic change-out of electrodes and components.

Even though the pros far outweigh the cons, Mr. Schumacher estimates that a good 80 percent of mold and tool makers still do not have a measuring system for conducting presets and at-line quality inspection. “A lot of them are simply afraid that a measuring machine will overly complicate their processes, as opposed to simplifying them,” says Ms. Schumacher. Father and daughter have come across the same misconception time and time again: customers assume that, to use a measuring machine, they would have to invest in a measuring lab and hire a metrology engineer.

The two Schumachers quickly put an end to this misunderstanding. In the demo center, they show potential customers that the ZEISS Contura and ZEISS DuraMax machines can perform high-precision measurements in the middle of production. In addition, all employees from their contract manufacturing company mill or erode form inserts, electrodes and machine components for individual WESCHU customers on the machines right in the demo center itself. There, the staff also measures the offset of electrodes and workpieces without any difficulty thanks to the ZEISS Calypso software preset.

Designed with employees in mind

“We have to cure more people of these misconceptions,” says Ms. Schumacher. She hopes that word gets around about how simple it is for mold and tool makers to utilize this measuring machine and the accompanying software. During a customer demo, an employee shows how to use ZEISS Calypso preset.

After the operator has determined the zero point on the clamping system, he selects a macro for electrodes or workpieces and then conducts a probe. A file with the offset data is then available. It can be sent directly to the erosion machine or to the job manager, who transfers all the data to the respective machine tool. “After the demo, the company reps quickly grasp that it doesn’t take long until even metrology novices are using this technology,” says Ms. Schumacher.

In 1978, Werner Schumacher founded the commercial enterprise WESCHU Vertriebs GmbH & Co., KG, headquartered in Nuremberg. Forced to find a way to help customers better appreciate the technology and superior performance of erosion, milling and measuring machines as well as automated solutions, Schumacher built a demo center. Yet he felt the demo machines would be more impressive if they were actually in use, which is why Schumacher founded the company Innovative Metall Technologien GmbH (IMT) more than 30 years ago. Today, 13 employees from this subsidiary mill, erode and measure form inserts, electrodes and machine components for WESCHU customers in the demo center’s two fully automated manufacturing cells. WESCHU has also been selling ZEISS measuring machines since 1980. Kathrin Schumacher, daughter of the company‘s founder, became a joint owner and Co-CEO of the companies WESCHU and IMT in 2008.

According to Schumacher’s calculations, anyone who enhances their zero-point clamping system and measuring system with an automated solution, such as the Chameleon machine from the company Zimmer & Kreim or a fully automated production cell, easily increases the total running time of their machines to more than 4,000 hours and generates a profit exceeding 110,000 euros per machine. Companies can even achieve 6,000 production hours with automated measuring systems and machine loading, which enables them to manufacture parts 24/7.

The two Schumachers both agree that a measuring machine lays the foundation for automation. Yet implementing automated solutions is hardly possible without employees’ support. Thanks to positive experiences with efficiency-boosting technologies, they understand that faster, streamlined processes secure rather than jeopardize their jobs. Following the tour of the demo center, the older Schumacher returns to the ZEISS Contura: “You can take everything I have, but please leave my two ZEISS measuring machines because these are what ultimately make our company efficient.”