The total focusing method (TFM) is a synthetic aperture beam forming technique that has been under active development in the NDT industry over the past decade.

In this paper, we introduce a newly developed semi-analytical model to predict the total focusing method (TFM) amplitude sensitivity map for both nondirectional and directional flaws. For complicated acoustic paths that involve multiple interface interactions and wave-mode conversions, a knowledge of the Acoustic Influence Map (AIM) enables an inspector to refine the scan plan to maximize the signal-to-noise ratio of the resultant TFM image and increase the probability of flaw detection. The accuracy of this new acoustic model was tested and validated by experiments using test blocks that contain side-drilled holes and flat-bottom holes. Results from the validation experiments show good agreement between the empirical TFM amplitude maps and theoretical AIM. The results also indicate that the model can be used to guide the selection of the optimal TFM inspection mode.

The total focusing method (TFM) is a synthetic aperture beam forming technique that has been under active development in the NDT industry over the past decade [1]. By applying appropriate transmission and reception delays to A-scan data collected in a full matrix capture (FMC) dataset, TFM can electronically focus on every location within an inspection region. Since every point is electronically focused, TFM can provide better resolution compared to conventional phased array ultrasound inspection techniques. In addition, by calculating and applying the time of flights of multiple acoustic modes, multi-mode TFM that can provide additional information about the specimen being inspected [2]. 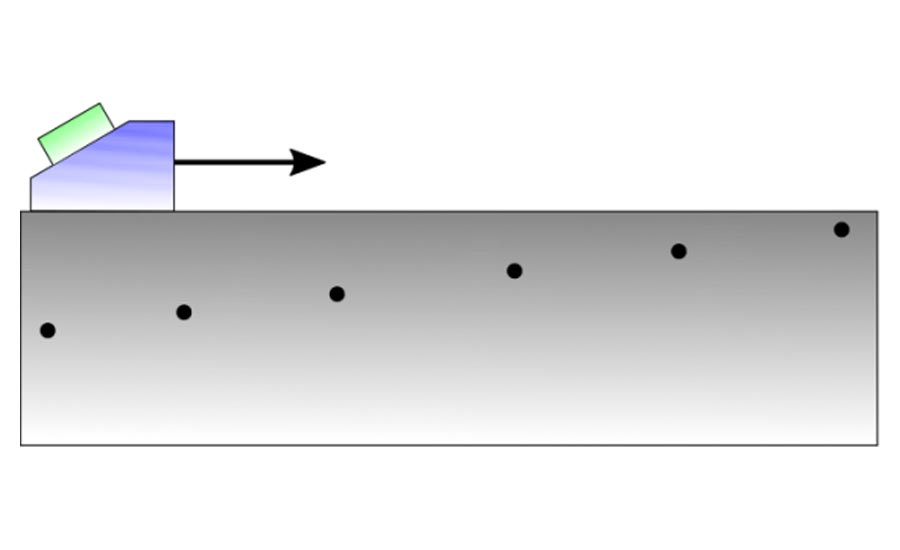 Figure 2: Schematic diagram of the SDH validation experiment. Note that only the top scan orientation is shown.

Despite the advantages listed above, TFM also has limitations governed by physical laws. An inspection area may have poor sensitivity due to the effects of interface interaction, beam forming limitations, and propagation path attenuation. Owing to the novelty of TFM, the lack of inspection codes, and the complexity of multi-mode TFM imaging, inspectors are generally unaware of the physical limits of TFM and, therefore, cannot define an optimal scan plan that maximizes the signal-to-noise ratio (SNR) and the probability of detection. Consequently, there is a need to introduce a tool that estimates the acoustic sensitivity map for a given TFM inspection scan plan. 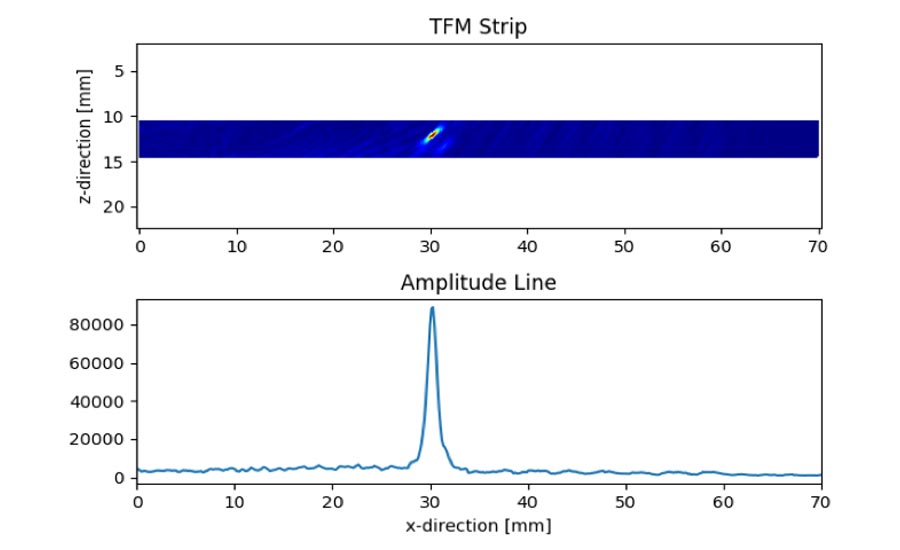 Figure 3: Procedure to obtain an amplitude line for a given flaw at one scan position. 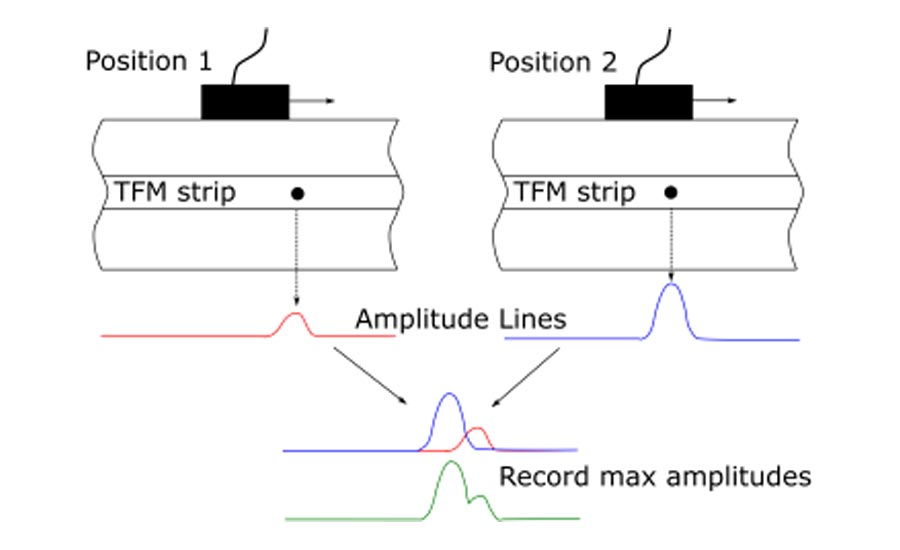 To calculate the AIM, we have developed a semi-analytical, ray-based acoustic model that calculates the two-way pressure response of pulse-echo, self-tandem, and double-skip TFM inspection modes. This acoustic model takes into account the effects of transmission and reflection coefficients, geometric beam spread, and material attenuation. In addition, in our model, we also used the Rayleigh-Sommerfeld integral [3] to model the far-field scattering response for a flat-bottom hole (FBH). The FBH scattering response is used to simulate directional flaws. 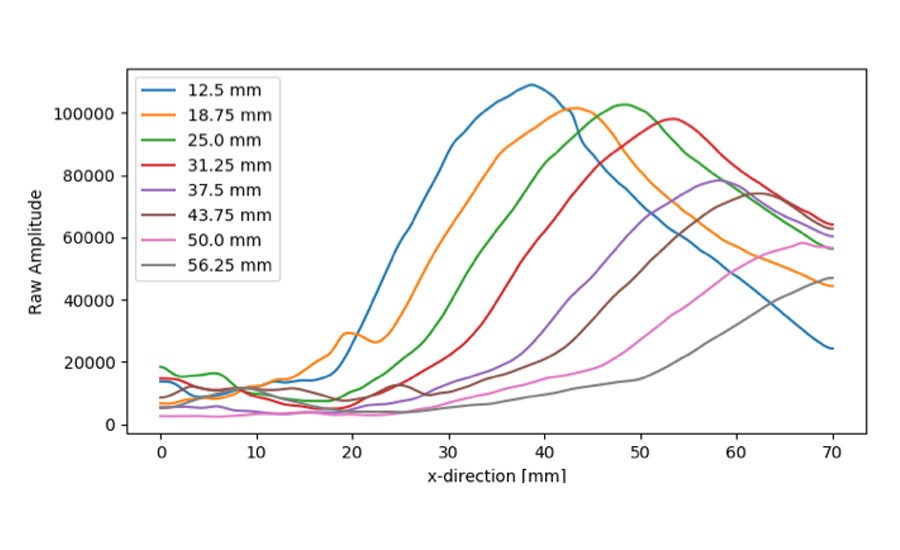 Figure 5: The composite amplitude lines of SDHs present in the NAVSHIPS test block. 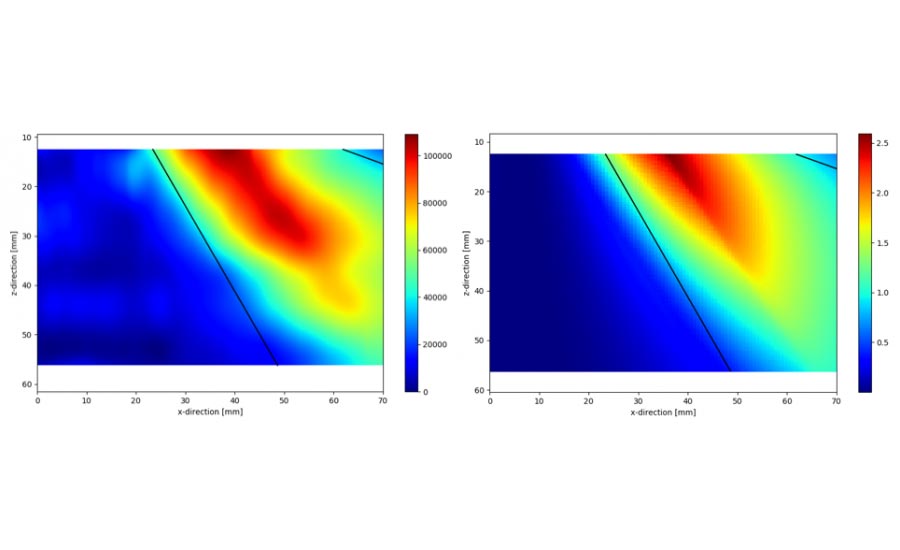 Figure 6: (a) Empirical SDH amplitude map and (b) theoretical SDH AIM for pulse-echo TT mode. 30º and 70º steering angle guidelines (from the midpoint of the active aperture) were added. The corresponding theoretical SDH AIM is shown in Figure 6 (b). 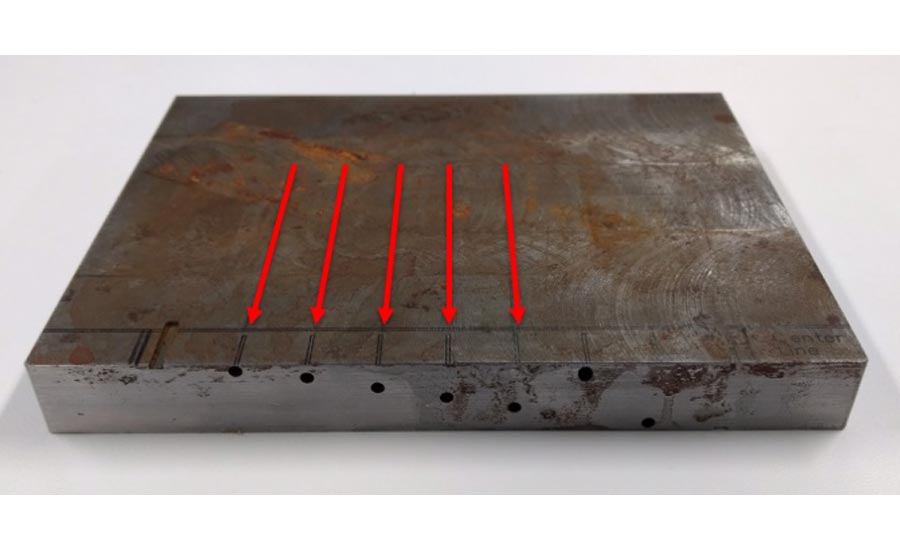 By translating the probe along the surface of the test block, we obtained scattering echoes from the SDHs at different positions relative to the probe. FMC datasets were gathered at each scan position for post-processing to generate empirical TFM amplitude maps. A description of the post-processing algorithm is described in the following subsection. 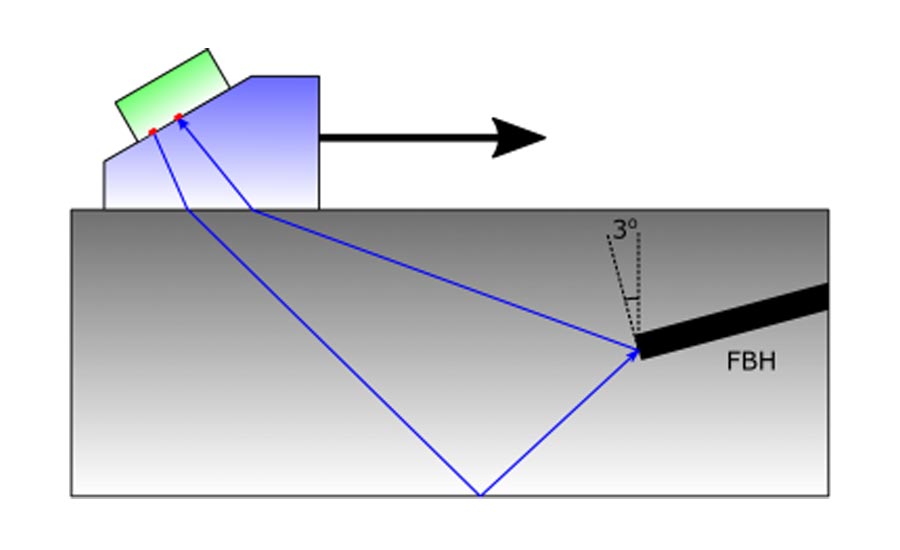 Figure 8: A schematic diagram of the validation experiment showing the self-tandem TFM mode.

The main steps for generating the empirical TFM amplitude map are:

Step 1 is illustrated in Figure 3. Figure 3 shows that we first form a TFM strip along the width of the amplitude map at depths specified by the z-gate. The position of the z-gate is chosen based on the known depth of the flaw. At every x-position along the TFM strip, the maximum amplitude is taken along the z-direction to obtain the amplitude line shown at the bottom of Figure 3.

To form the composite amplitude line for a given flaw, we compare all amplitude lines obtained at different scan positions and record the maximum amplitude values. This procedure is illustrated in Figure 4. 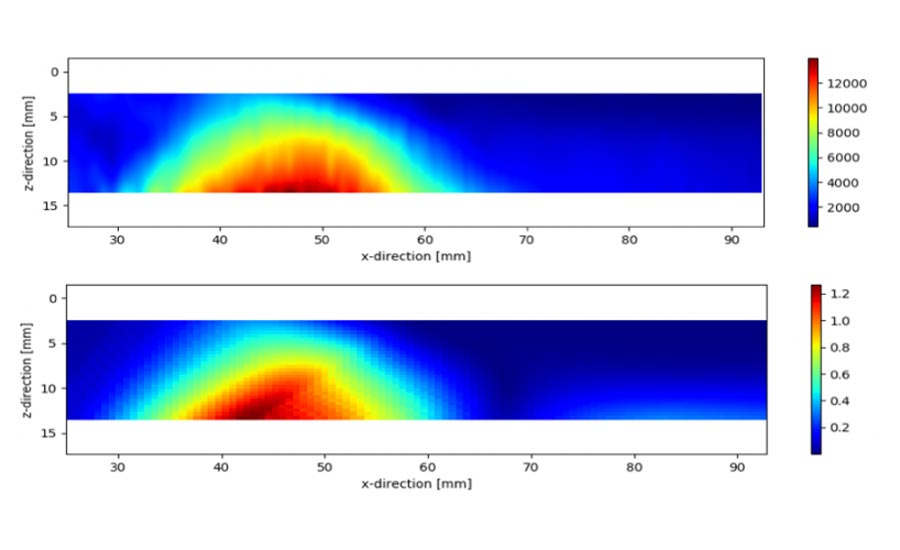 After forming the composite amplitude line for a given flaw, the process is repeated for all flaws at different depths. Figure 5 shows the pulse-echo TT mode composite amplitude lines obtained for the SDHs present in the NAVSHIPS test block (both top and bottom orientations). In Figure 5 and all other experimental TFM-derived figures presented in this paper, the amplitudes of the TFM images are not normalized. Since a 12-bit digitizer is used in the acquisition electronics and the probe contains 32 elements, the theoretical maximum amplitude in the TFM image is 2097152 (212 ÷ 2 × 32 × 32).

Comparing figures 6 (a) and (b), it is evident that the acoustic model can accurately predict the area within the scan plan that has the optimal sensitivity. The discrepancies between the two figures can be attributed to small variations in coupling pressure as the probe is translated along the test block’s surface. Note that the amplitude of the theoretical AIM is in arbitrary units because it is extremely difficult to model the exact magnitude of the received voltage signals from the acquisition system. However, since consistent arbitrary units are used for different AIMs, it is still possible to compare the TFM acoustic sensitivities of different scan plans and different acoustic modes. 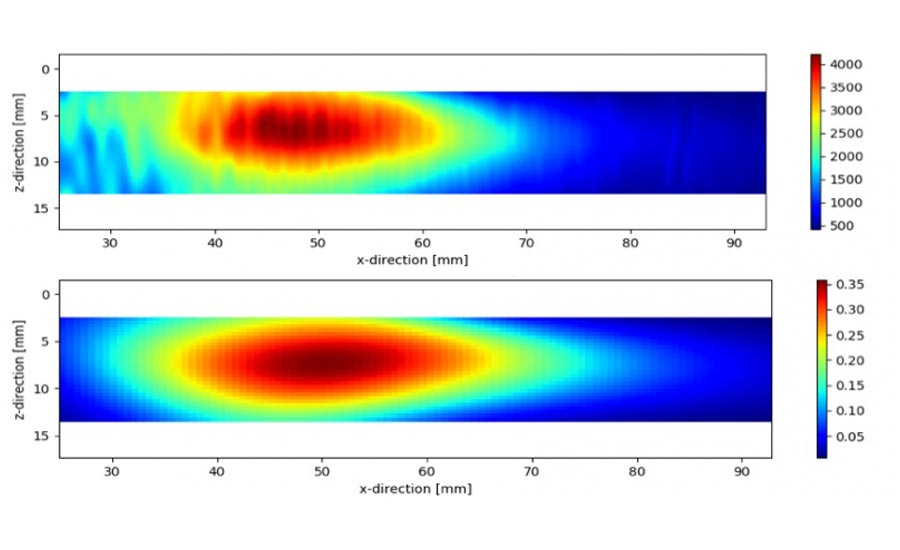 To test the accuracy of the acoustic model for predicting the amplitude sensitivity for directional flaws, we conducted validation experiments on a custom-machined test block. The test block has a thickness of 20 mm (0.8 in.) and contains FBHs that were drilled to match the profile of a typical J-bevel weld. For this study, we use the 5 FBHs whose bottom surface normal vectors are oriented 3º below horizontal. A photograph of the test block with indications of the scan axes is shown in Figure 7.

For this experiment, we used a 32-element 5L32-A32 probe with a center frequency of 5 MHz and an element pitch of 1 mm. The probe was coupled to a 36.1º SA32-N55S-IHC Rexolite wedge. Since the orientations of the bottom surfaces of the FBHs are near vertical, the acquired FMC datasets were processed in self-tandem (single skip) modes. A schematic diagram of the scan plan is shown in Figure 8.

The empirical FBH amplitude map and the theoretical FBH AIM for self-tandem TTT mode are respectively shown in Figure 9 (a) and (b). Comparing the two plots, it is evident that the acoustic model provided an accurate estimate of the relative acoustic sensitivity within the scan region. Figure 9 suggests that self-tandem TTT is better suited for detecting vertical flaws located near the bottom of the test sample.

The empirical FBH amplitude map and the theoretical FBH AIM for self-tandem TLT mode are respectively shown in Figure 10 (a) and (b). Once again, it is evident that the acoustic model provided an accurate estimate of the relative acoustic sensitivity within the scan region. The oscillations of the empirical amplitude map from x = 25 mm (1 in.) to z = 40 mm (1.6 in.) are caused by interference from other acoustic modes that have similar travel times.

In addition, comparing Figure 9 with Figure 10, we see that the ratios of maximal amplitudes between the two self-tandem modes are approximately 3.3 (13800/4200) for the empirical amplitude maps and approximately 3.4 (1.23/0.36) for the theoretical AIM. The similarity of amplitude ratios suggests that the acoustic model can also be used to predict the relative acoustic sensitivity across different TFM imaging modes. 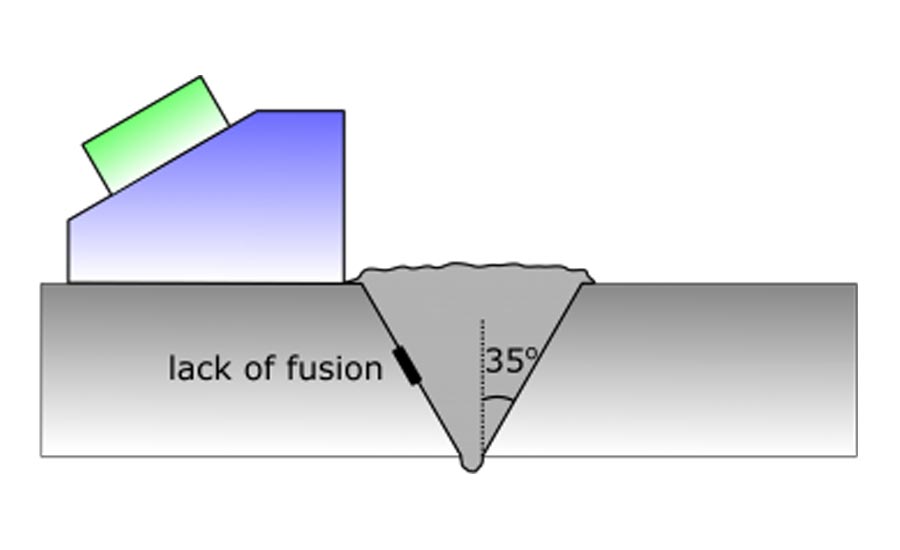 To further demonstrate the utility of the acoustic model, we present an example of a real-world application where the theoretical AIM is used to guide our selection of the TFM inspection mode. For this example, we inspected a V-bevel weld sample with a known lack of fusion defect. The weld angle is approximately 35º, and we used the same 5L32-A32 probe and SA32-N55S-IHC wedge that was used for the FBH validation experiment. A schematic diagram of the experimental setup is shown in Figure 11.

In the theoretical model, the lack of fusion defect is simulated by a 5 mm (0.2 in.) diameter FBH defect that has a bottom surface oriented at 35º away from the vertical. The corresponding theoretical AIM for self-tandem TLT mode and double-skip TTTT mode are shown in Figure 12. 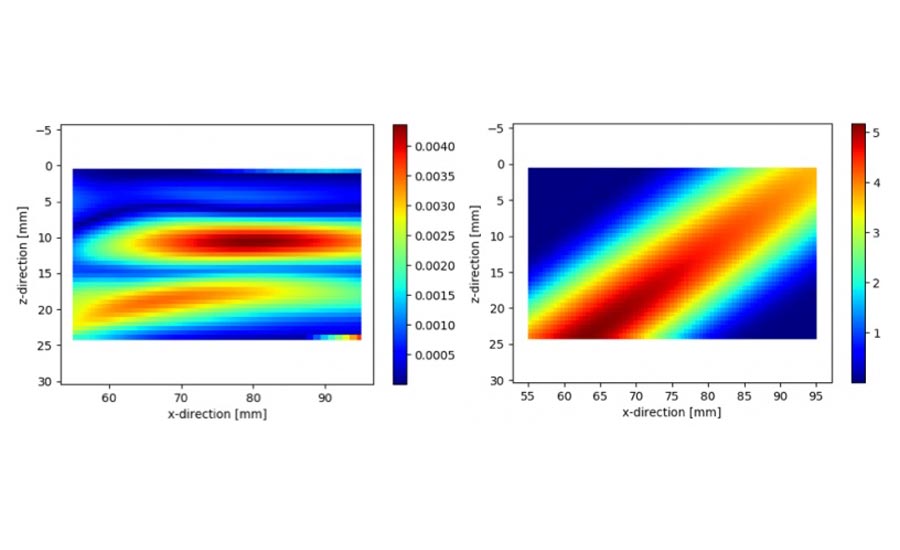 Figure 12: Theoretical AIM for a lack of fusion inspection plan in (a) self-tandem TLT mode and (b) double-skip TTTT mode.

Figure 12 shows that the TLT mode AIM is more irregular compared to the double-skip mode AIM. Consequently, it would be more difficult to obtain a robust assessment of the size of the lack of fusion defect using TLT mode. In addition, the expected amplitude from the TLT mode is three orders of magnitude lower than the double-skip mode. Using these theoretical AIMs, we predict that the double-skip TTTT mode is the preferred TFM imaging mode. The corresponding experimental TFM images are displayed in Figure 13.

Figure 13 demonstrates that the double-skip TFM image has a good SNR and provides a clear assessment of the size of the lack of fusion defect. In contrast, the self-tandem TFM image has a poor SNR and contains isolated echoes that are difficult to interpret. The isolated echoes are likely the diffracted echoes from the sharp tips of the lack of fusion defect. Nevertheless, the dimension and type of defect are difficult to assess in self-tandem TLT mode. 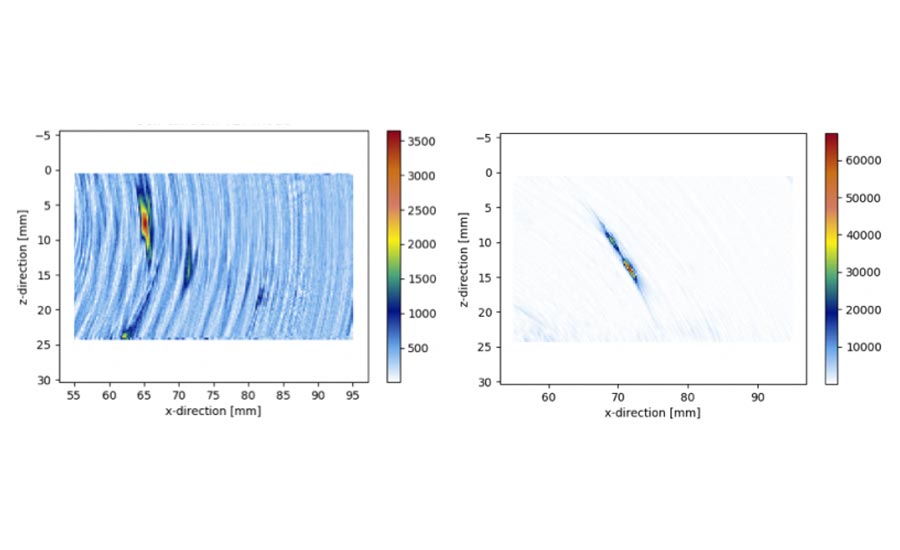 Figure 13: TFM images of a lack of fusion defect in (a) self-tandem TLT mode and (b) double-skip TTTT mode.

We have demonstrated an acoustic model that can accurately predict the TFM amplitude map for both nondirectional and directional defects. For a given inspection mode, the model can be used to adjust the scan plan (aperture, scan frequency, probe location, etc.) to optimize the SNR and the probability of detection. Since the model provides a comparison of relative amplitude across different acoustic modes, it can also be used to select the optimal TFM reconstruction mode. In the future, we plan to extend the model to more complex geometries and include more flaw scattering models to increase the utility of the model.

This paper was originally published in the Proceedings of the 2019 ASNT Research Symposium, 1–4 April, Garden Grove, CA. Copyright © 2019 by The American Society for Nondestructive Testing Inc., Columbus, OH. Reprinted with permission.

Benoit Lepage began actively working in the NDT domain in 2000 as an RDTech employee. He contributed to numerous innovation in the field through product based innovations and patents (nine granted patent as first inventor) in eddy current array, phased array and guided wave methods.

Chi-Hang Kwan joined Olympus NDT Canada to work in the development of new modeling, imaging and signal processing solutions in the field of acoustics.

Guillaume Painchaud-April joined Olympus NDT Canada as an industrial physicist in 2012. His current work relates to physical modeling of wave phenomena both in acoustics and electromagnetics, and signal processing.

Transformative Technologies and What They Mean for Inspection

Calipers 102: The Basics and Beyond

What Should Analytics Add to a QMS Solution?

In this webinar, experts will explore an innovative, high-speed, non-contact technology that enables three-dimensional accuracy across all data points in a digital twin and contrast this technology with traditional measurement methods such as a CMM.

This webinar will explore the costs and inefficiencies around paper processes and introduce Digital Clipboard for automating process workflows and improving productivity, increasing data integrity, accelerating reporting and corrective action, as well improving traceability and training.