Modern technology is closing the technology and accessibility gap between N-ray and X-ray imaging.

When Wilhelm Rontgen discovered X-rays in the 1890s, he almost immediately discovered the imaging applications of this hitherto-unknown type of radiation, and experts in the medical community and the industrial nondestructive testing community rapidly seized on the potential this new science of radiography offered. Within 20 years, X-ray sources had become both potent and portable, making X-ray imaging a ubiquitous and essential tool in the field of nondestructive testing. Even over 80 years after James Chadwick discovered the neutron and its radiographic applications in the 1930s, though, neutron radiography, or N-ray, has yet to become as ubiquitous as X-ray. N-ray is a powerful NDT tool, but its accessibility lags behind X-radiography. However, modern technology is closing the technology and accessibility gap between N-ray and X-ray imaging.

Radiographic inspection uses penetrating radiation to produce images depicting an object’s internal structure. Because different forms of radiation have different means of interacting with materials, an NDT professional can pick up on a wider range of details using multiple methods of radiography than if they only used one.

Regardless of the type of radiation used, the broad strokes of the imaging method are the same. A source emits the radiation, which passes through a collimator. The collimator filters and restricts the passage of radiation ensuring that only parallel beams pass through. Beam collimation improves image quality, resulting in a sharper and more detailed image. Once the beam is collimated, it collides with the object to be imaged.

Parts of the object will be opaque or transparent to the radiation to varying degrees, just like objects can be transparent or opaque to our eyes. The radiation that makes it through to the other side reacts to a chemical plate to produce an image on film or triggers sensors to produce a digital image.

The details of how these types of penetrating radiation penetrate various materials are where N-ray as a method differs from X-ray and other forms of radiography. 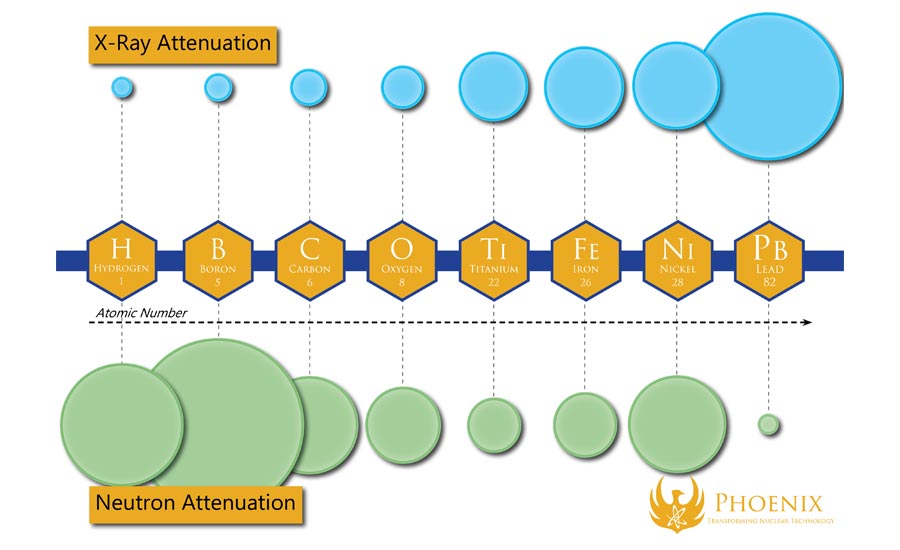 A chart comparing the X-ray and neutron attenuation rates of various elements. Chart is not to scale.

The most obvious difference between N-ray and other forms of radiography, of course, is that neutron imaging uses neutron radiation. As opposed to alpha particles and beta particles, which have positive and negative charges, and electromagnetic radiation, which consist of high-energy photons, neutron radiation is inherently electrically neutral.

Since neutrons have no charge, they interact with materials differently than other forms of radiation. An element’s likelihood of interacting with radiation is known as its cross section or attenuation rate. The X-ray cross section varies linearly with density—the denser something is, the harder it is to “see” through—but the neutron cross section is governed by more complex rules. Many light materials, especially plastics, are very opaque to neutrons, and many dense materials, such as lead, are more transparent. 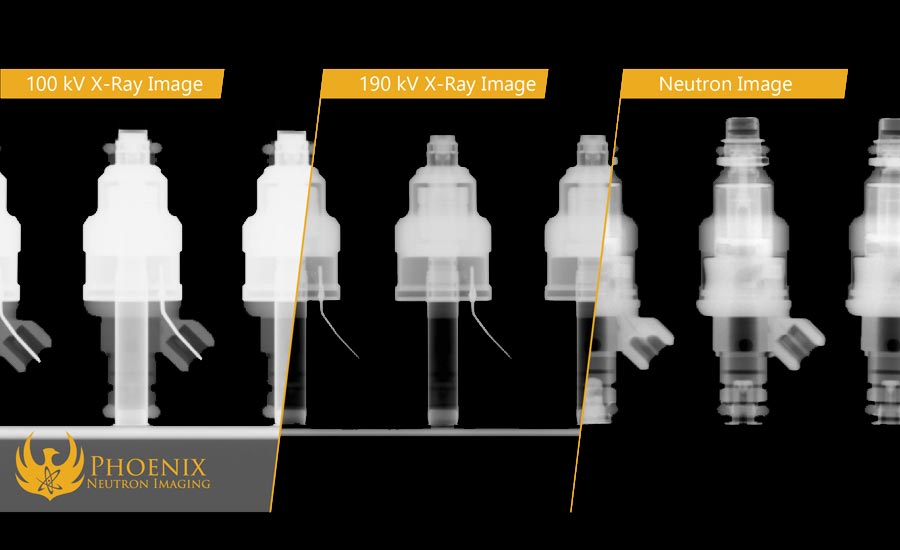 These unique physical properties give N-ray a unique niche within radiographic applications. For example, N-ray is a far more useful radiography method for inspecting energetic devices such as the propellants used in aircraft ejection seats and payload separation systems in aircraft and spacecraft than X-radiography, since hydrogen- and nitrogen-rich energetic compounds are opaque to neutrons while the dense metal shells surrounding them are opaque to X-rays. Another consequence of these physical properties is that N-ray is also particularly useful for detecting water within materials or parts.

A neutron image of a set of bullets, demonstrating N-ray's usefulness for inspecting energetic devices.

Another unique property of neutron radiography is that contrast tagging can be done with neutrons, unlike other forms of electromagnetic radiation. Because of the way neutrons interact with materials, some elements are classified as “neutron absorbers,” which eagerly react to neutron radiation and are thus extremely opaque to neutron imaging. One such element is gadolinium.

In nondestructive testing methods such as dye penetrant testing, flaws and surface discontinuities such as hairline cracks, gaps, leaks, and fatigue cracks are detected using capillary action. The dye acts as a contrast agent for these applications, making the flaws more easily visible to the naked eye. By creating a gadolinium-rich liquid solution and applying it to an object, the object will be “dyed” in a similar way, but only neutrons will be able to “see” where the dye settles. 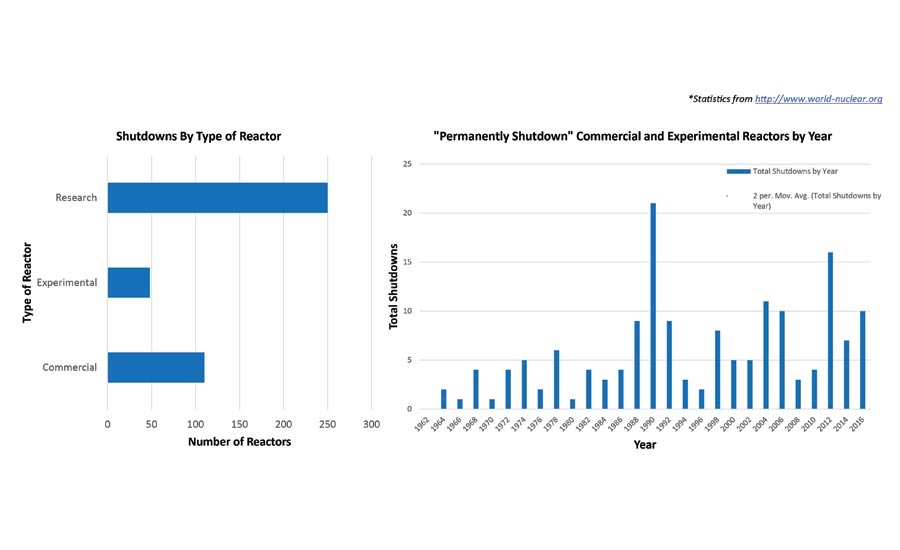 A chart showing the rising number of permanent shutdowns of commercial, experimental, and research reactors.

Gadolinium tagging is critical to jet engine turbine blade quality assurance, which is one of neutron imaging’s most significant NDT niches. These turbine blades are cast around ceramic molds extruded out of lightweight metal that actually has a lower melting point than the maximum temperature of its operational environment—so if they aren’t properly cooled, they can actually melt while the engine is running! To counteract this, the turbine blades are cast with cooling channels running through them that air can flow through. In the casting process, bits of ceramic remnants can become stuck in the blades’ cooling channels, which present a significant risk of catastrophic engine failure and danger to the passengers. Rigorous quality assurance has to root out these types of defects as comprehensively as humanly possible—however, for both X-ray and N-ray, the attenuation rates between the metals and ceramic remnants are too similar for the contrast to be easily apparent in an X-ray or neutron image.

This is where gadolinium tagging comes in. By washing the turbine blades in a gadolinium solution, gadolinium seeps into the porous structures of the ceramic remnants but washes out of everywhere else, dyeing them so that they can be easily identified on a neutron image as indicative of a defect!

An N-ray image of an antique rotary phone, demonstrating the way neutrons interact with materials of varying densities.

Using high- or low-energy beams of penetrating radiation in radiographic testing depending on the thickness and density of the material is nothing new. A high energy X-ray can show you a different view of an object’s interior than a low-energy X-ray since it can pass through higher-density materials. Likewise, the amount of energy a neutron beam has influences how it interacts with materials. Neutron energy (referred to more commonly as temperature) is measured in electron-volts, and there are two especially important temperatures of neutron radiation for neutron imaging: Thermal neutrons, which have an energy of 0.025 electron-volts or less, and fast neutrons, which have an energy greater than one mega-electron-volt (one million electron-volts).

Compared to varying the energies of other forms of penetrating radiation, cooling neutron radiation down to its desired temperature requires a unique method. When a neutron source emits fast neutrons, for example, but needs to be used for thermal neutron imaging, a mechanism called a “moderator” is used to decrease the neutron temperature all the way down to 0.025 eV.

Moderators work by forcing the fast neutrons to pass through “speed bumps” in the form of neutron-slowing materials such as heavy water. Neutrons do not pass through this material easily. In fact, they collide with the atoms of the material over and over again, bouncing around and losing energy with each collision.

Eventually, the neutrons exit the moderator cooler and slower, having expended the vast majority of their initial energies. From the moderator, the now-thermal neutrons move onward to be used for imaging. 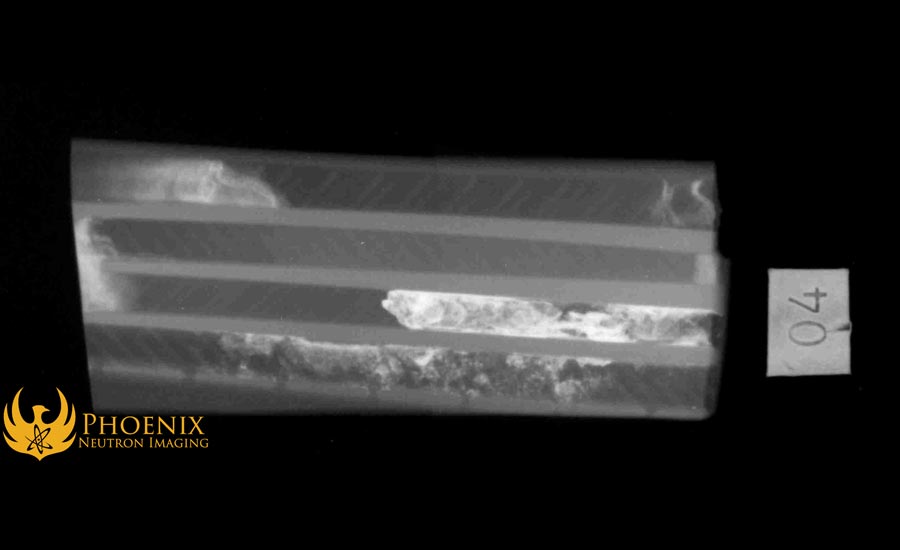 A cross-section of a gadolinium-tagged turbine blade, showing how the tagging process causes ceramic fragments to “light up” in a neutron image.

Why Neutron Imaging is Underused in NDT

When neutron imaging was first proposed as an industrial tool, neutron sources were small and produced a proportional neutron output. To create a clear, sharp image, it takes a lot more neutrons, and this is why it did not catch on until about twenty years later in the 1950s with the first fission reactor facilities. Nuclear fission, the same catalyst behind nuclear power plants and atomic weapons, produces large amounts of neutron radiation by splitting heavy elements like uranium into radioactive isotopes.

Nuclear fission reactors have for well over half a decade been the best source for N-ray, since their neutron outputs allow high-quality neutron radiographs to be produced in a timely fashion compared to smaller sources. However, the reliance on nuclear reactors has prevented N-ray from growing on the same scale as X-ray and other forms of industrial radiography, due in no small part to the longstanding trend of reactors falling out of operation, de-licensing, and being decommissioned.

One well-known example in the industrial NDT community is Aerotest Operations, which was the primary source of N-ray for the aerospace industry from the 1980s until its sudden shutdown in the 2000s due to an unexpected licensing issue. The loss of this facility dramatically reduced the availability of N-ray to the aerospace NDT community overnight, forcing them to either scramble to find alternative vendors or give up N-ray altogether in favor of less effective, more accessible methods.

However, modern advances in nuclear technology are offsetting these losses, and modern accelerator-based neutron sources in particular have a key role to play in the future of N-ray. These sources have recently advanced to the point at which they can set records for the largest sustained neutron output by nuclear fusion and can create Category I neutron images, which represent the highest image quality as defined by ASNT International’s neutron imaging standards. New accelerator-based neutron imaging systems and facilities are promoting accessible N-ray to the NDT community and exploring new ways to make industrial parts and infrastructure safer and more reliable.

Modular Fixturing: How It Works

How To Implement Lean Manufacturing, 2E