As of now, the new universal interface to MVTec’s standard machine vision software, HALCON, is available for image acquisition with all USB3 Vision compliant cameras. 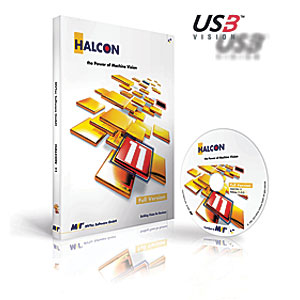 Key benefits of the new USB3 Vision standard are the high bandwidth in excess of 350 MB/s and an easy-to-use plug and play interface. Moreover, power and data are carried via the same cable. Easy software access is managed by the well-established GenICam programming interface.

With USB3 Vision, hardware and software from different vendors work seamlessly over USB 3.0 connections. Most recently, the newly developed HALCON USB3Vision interface has been officially validated by the AIA test procedures. In particular, it was successfully tested at the AIA plugfest on October 23, 2013 with Basler, Baumer, MATRIX VISION, Point Grey, and XIMEA cameras. The interface is available for HALCON 11 on Windows 7/8 (32-bit and 64-bit). In the near future, the availability under Linux is planned.

Existing HALCON users will be familiar with the new interface to USB3 Vision because its use is very similar to the already existing interfaces for GigE Vision and GenICam GenTL.