In the early 17th century, Galileo Galilei discovered that he could focus his telescope to examine small objects up close. Around 1620, it is believed that Cornelius Drebbel invented the compound microscope. In the 1670s, Antonie van Leeuwenhoek began experimenting with very high-magnification, single-lensed microscopes that he designed himself.

Fast-forward 350 years and microscopy is a wide-ranging field that covers numerous industrial applications. Meanwhile, the growth of automation, part of a paradigm shift commonly referred to as Industry 4.0, has played a major role in driving microscope manufacturers to innovate apace with increasingly smart production lines.

Developed in the mid-1980s, digital microscopes remain popular for R&D, general inspection, and QC/QA processes. Ergonomic and user-friendly, digital microscopy also stands out for transforming optical microscopes into digital systems and expanding their capabilities to include image sharing, analysis, and measurement.

“In the pharmaceutical business and increasingly in med tech, you want to keep software where you’re recording every stage of the process—for security, basically,” Gooch explains. “The medical device industry has clearly recognized the advantages of using video over purely optical microscopy.” So has the automotive sector, he says, since high-voltage circuit boards in electric cars have risen quality standards to levels that nearly match those in the aerospace industry.

Beyond video, INSPECTIS Pro-X software allows built-in zoom trackable calibration, so the user doesn’t need to make manual calibrations for every zoom level. Pro-X also enables focus stacking, a major advantage when inspecting subjects with large height variations. But full automation that eliminates the operator has not yet infiltrated this kind of digital video microscopy in industrial applications, Gooch says.

“In a manufacturing environment where you’re making precision parts, or when a surface or detail is very important to you, you often have to do visual checks—and even with today’s levels of automation, you still need to do a check on those processes,” he explains. “We’re still not to the level where we can totally rely on the feedback of machines.” 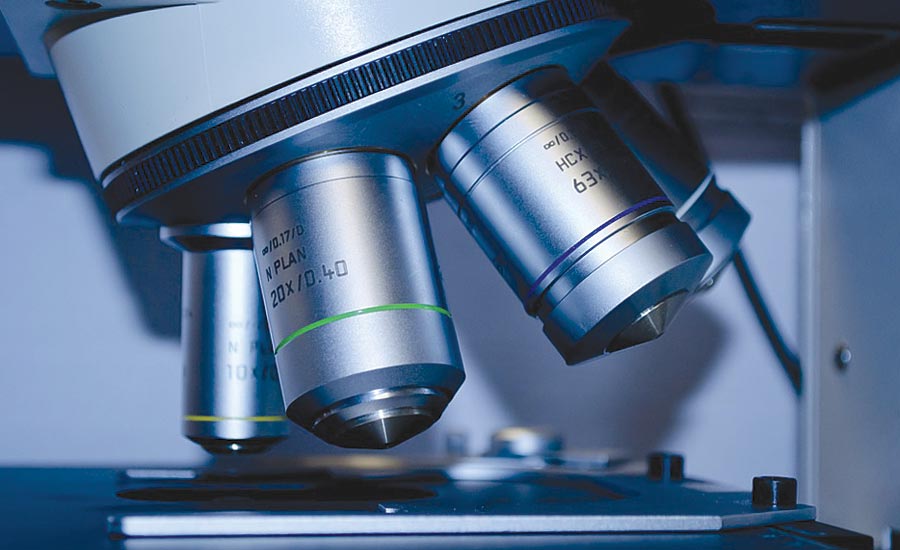 For instance, a typical application for digital microscopes in the electronics business is to follow up the automated optical inspection (AOI) of a circuit board. INSPECTIS often supplies manufacturers with post-AOI inspection, so people can have a look at a fault that’s being called up by an AOI machine. “If the AOI detects a fault,” Gooch says, “it can highlight where the fault is, but it still takes an expert eye to have a look at that and say, ‘Is that something to do with the soldering or the oven temperature? Is it something we can fix?’ A lot of those decisions are still being made by human beings.”

Also rooted in the 1980s, 3D optical microscopes—including profilers for measuring micro roughness on precision surfaces—have continued to evolve. Bruker, a scientific instruments manufacturer, is one of the industry leaders on this front; they boosted their position after acquiring Alicona, an optical-based metrology solutions provider, in late 2018.

Alicona provides a new 3D optical microscope technique called focus variation, says Samuel Lesko, senior manager for optical and tribology applications at Bruker. Focus variation, which calculates a sharp image and measures its depth with optics that have very limited depth of field, is a key element of Bruker’s Contour LS-K 3D Optical Profiler, in that it enables both high-resolution images and quantifiable data.

“We now cover full shape and geometric dimension as well as roughness,” Lesko notes. This is important for OEMs who demand measurements at higher frame rates and in general want faster throughput without sacrificing accuracy and quality control. This also is where automation and self-adapting systems come into play.

“In our systems, we already have self-adapting algorithms, but they’ve become more important,” Lesko says. For example, when the system takes measurements on a surface, “it has some criteria to analyze special frequencies and amplitudes, and the system will decide by itself which algorithm is best to recreate the topography of that surface.”

Lesko attributes an uptick in automated features and inline capabilities to a new way of thinking in a younger generation of production engineers. “Rather than thinking about how to measure things, they’re thinking about what needs to be measured,” Lesko says. “That is in essence why they come to us, as manufacturers of 3D optical profilers: They come to us with clear requirements of what to measure, and it’s up to us to design or revamp our thinking in order to fully measure what is required.”

“Smart” is more than a buzzword in modern manufacturing, as smart factories and smart data management are now commonplace. But are industrial microscopes really getting smarter?

Dr. Robert Zarnetta, who heads the business side of industrial microscopy solutions at ZEISS, says yes.

“‘Smart’ with respect to our microscopy solutions means we are increasing the intelligence of our systems in order to allow for better usability and operator-independent results,” he explains. “Both of these are essential benefits for quality control applications, where throughput and data reliability are key.” To keep the operator involved and efficient, however, “we need to strike a balance between intelligently assisting the user and giving the operator the flexibility they need to use the system.” 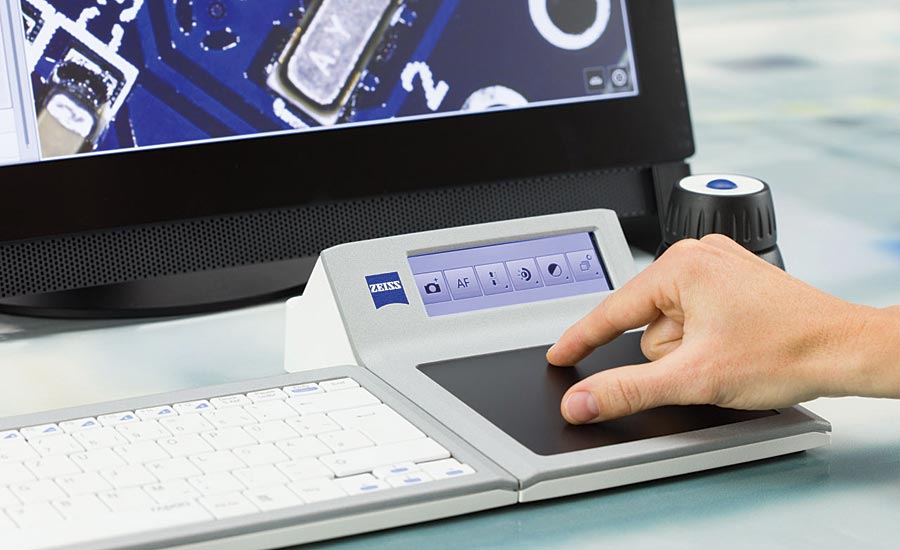 A glimpse of the Smart Workflow option on the Smartzoom 5 controller. Source: ZEISS

With the Smartzoom 5 digital microscope, ZEISS offers “an option of intelligence in navigation,” he says. An additional camera captures an overview image of a complete part under investigation; and for each inspection task, the microscopes “know” where in relation to that part the image or measurement data was taken.

Smartzoom is smart, Dr. Zarnetta explains, because the system “remembers” where the regions of interest are located: “When using the guided workflow in our software, not only is the position recorded, but all other relevant imaging parameters—illumination, focus, magnification, etc.— are recorded too, and can be applied automatically when the workflow is executed.”

In addition, he says that the system “store[s] all calibration data of the objectives within the individual objectives, so that when they are changed, the systems read out the calibration data and automatically use the information to correctly scale images.” In this way, intelligence is built-in into the hardware itself.

“However, we will only see widespread use when it becomes easy and efficient for users in quality control to train the machine learning algorithms,” he clarifies. “Quality professionals should gear up by understanding today’s machine learning possibilities and by defining use cases which need intelligence in image analysis, so they can exploit the positive impact of the technology for their quality challenges.” Q