Bearing Properties: The Impact of Residual Stress and Retained Austenite

Regardless of a bearing’s intended use, it must be designed and manufactured to withstand difficult environments.

As one of the most common mechanical components in the world, roller elements are of critical importance. It is necessary for bearings and raceways to be carefully engineered and manufactured so that the machines which use them are as safe and stable as possible. The effects of residual stress and retained austenite on the performance of bearings have been commonly reported in literature. X-ray diffraction has the unique ability to provide a measurement of both retained austenite and residual stress. By knowing these data and observing how they vary with processing parameters, bearing production can be refined to provide optimal properties.

Residual stresses can be either detrimental or beneficial to many applications. This is especially true for bearings, where tensile stresses aid in the propagation of cracks and diminish fatigue life1. Bearings commonly exhibit contact fatigue. Contact fatigue results from the Hertzian stress which occurs as two rounded elements, cylinder or sphere, roll across one another. Locally, these two elements will temporarily deform, creating a contact area between the two components. This deformation and the movement of the elements as they roll produces an alternating subsurface shear stress. Over time, this will cause plastic strain to accumulate which ultimately initiates a crack2.

As the rolling continues, these tensile stresses will facilitate sub-surface crack propagation and, eventually, spall formation leading to component failure. As the Hertzian contact is an unavoidable phenomenon, bearings should be manufactured to guard against the tensile stress accumulation in order to prolong fatigue life. Cracks will only propagate in tension, just like a notched sheet of paper will only tear when pulled apart.

Compressive stresses can be introduced into the part during manufacturing, as a part of forming or as a separate process, to counteract the tensile stresses. There have been numerous studies conducted showing that compressive stresses have a positive effect on the fatigue life of bearings3-6. The residual stress state reflects all processes which have involved the part, though some treatments are certainly more impactful. Hard turning, shot peening, grinding and heat treating, for example, are commonly used parameters which will have a strong effect on the residual stress profile. The exact impact will depend on the process and parameters used.

Also important for bearings is the retained austenite content. Austenite is a high temperature phase of steel which is metastable below approximately 720°C, unless alloying elements have been added to stabilize the phase, as in the case of M50 NiL and, more extremely, 200 and 300 series stainless steels. The effects of retained austenite on bearings is a complex subject. It is well known to be undesirable when tight dimensional tolerance is key, but there are also reports of it improving the fatigue life of bearings, especially under extreme conditions1,7. Since austenite is not stable at room temperature, it can transform into martensite when under thermal and/or mechanical load. A volumetric expansion accompanies this transformation as the atoms rearrange from the more compact austenite phase to the loosely packed martensitic structure. For low austenite content, this atomic scale change may not result in a large enough macroscopic change to matter. Depending on the amount of austenite present, the alloy, and the amount converted, this could be a significant change. The ASM handbook shows the volume change as a function of the carbon in solution. Example values show that the volume change from austenite to martensite is in the neighborhood of 4% for carbon steels with 1% carbon8.

From a contact fatigue standpoint, however, austenite has been found to be beneficial. The source of this phenomenon lies in its softness relative to other phases present. This leads to austenite experiencing plastic strain first. In fact, austenite has been described as acting like a cushion9. While this may not be the most accurate image, the sentiment is appropriate. While the austenite yields, the rest of the material experiences a much lower stress. Retained austenite has been shown in literature to actually improve the contact fatigue life of a bearing. In one such study, samples with 0% retained austenite was compared to ones with 35% retained austenite. The high retained austenite samples showed a fatigue life roughly 4x that of the low austenite samples under 2GPa load10. The softness of austenite also plays a part in resisting damage from debris in the race. The localized plasticity can work harden the austenite to combat further damage as well as lead to strain-induced transformation into martensite which is innately harder and more resistant to deformation9.

By stabilizing austenite at lower temperatures, it becomes possible to leverage these improved properties without risking the dimensional transformation which normally accompanies retained austenite. Balancing the advantages and disadvantages of retained austenite is key to optimal bearing performance. There are many industry standards which set the acceptable limits of austenite for most applications. X-ray diffraction is the preferred method for measuring low amounts of retained austenite. The other primary method, metallography, cannot typically determine austenite content below 10-15%. For standards which require concentrations below this, the best nondestructive option is X-ray diffraction.

Residual stress measurements performed using X-ray diffraction have some benefits over other methods. The technique is nondestructive when measuring at the surface so it is possible to measure production parts. It is also very fast, with a typical measurement taking between two and 20 minutes with setup, depending on the measurement parameters used. X-ray diffraction also provides a direct measurement of the strain eliminating the need for knowledge of the unstressed part (which is usually difficult to obtain at best). The detailed method for performing X-ray residual stress measurements is described in standards such as ASTM E915 and E2860. 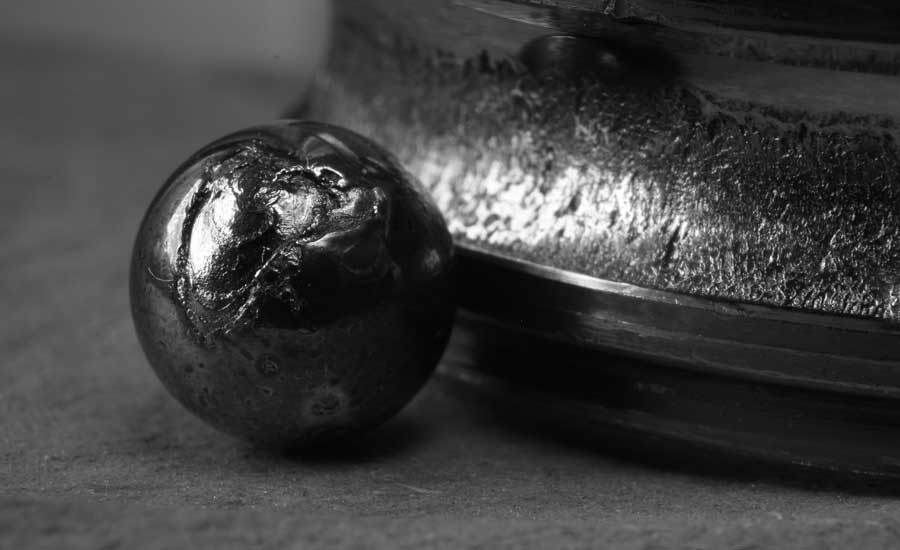 Retained austenite is measured by comparing the integrated intensity of martensite and austenite peaks. In a multiphase system, the relative intensity of a diffraction peak is proportional to the volume fraction of the phase which produced it. It is then possible to compare austenite and martensite peaks to determine the percentage of austenite. Standards like ASTM E975 require that multiple peaks be compared to give the best results. By examining multiple peaks for each phase, various sources of interference can be accounted for. The result is then multiplied by an R-factor, which compensates for volumetric differences between the phases which could skew the data. The allowable amount of retained austenite varies by application and alloy. Guidelines for this exist in standards such as ASTM F2215.

Regardless of a bearing’s intended use, it must be designed and manufactured to withstand difficult environments. As one of the fundamental mechanical components in every sector of society, bearing failures can have costly economic and human impacts. As bearing steels require increased performance, heat treatments and microstructures may be engineered in order to use the beneficial effects of residual stress and retained austenite. Both residual stress and retained austenite play central roles in a bearing’s service life, but are difficult to precisely manipulate without having reliable data. X-ray diffraction is a key tool which can bridge the gap between a product’s design and its manufacture.

Key to Quality: The Impact of NDT on the Medical Community

Back to Basics: Impact Testing