Multiple camera systems have been a fixture in machine vision for decades. What is new is the use of CXP.

Understandably, designers of high-throughput, multi-camera machine vision systems have grown dissatisfied with those aging standards and have found a new champion, CoaXPress (CXP), a high-speed, point-to-point, serial communications interface that runs data over off-the-shelf 75Ω coaxial cables. The original version of CXP, introduced in 2008, supported a maximum data rate of 6.25 Gbps, approximately six times faster than GigE Vision and 40% faster than USB3. Version 2.0 of CXP has added two more speeds: 10 Gb/s (CXP-10) and 12.5 Gb/s (CXP-12) ideal for supporting higher resolution cameras at double the speed of the original, without the complexity and cost of multiple cables and connectors, and in a platform that is easily adapted and scaled to meet rapidly changing requirements.

Besides blazing speed, integrators greatly value CXP’s support of cable distances of 100 meters and beyond, operating at different speeds and/or resolutions. CXP offers greater flexibility for system integrators who previously were handcuffed to a few meters if using Camera Link or USB3.

If distances are insufficient, users could deploy thicker coaxial cables. Additionally, CoaXPress has the ability to be repeated over coax or transmitted over fiber optics

Another big plus to CXP is that uncompressed data, power and low-speed uplink are all simultaneously distributed over a single cable, greatly reducing complexity and potential points of failure. Also, since many legacy security, broadcasting, and surveillance systems use analog cameras, these systems can easily be upgraded with CXP-enabled cameras without the need to replace the entire cabling infrastructure. Coaxial cables have inherently excellent protection against electromagnetic/ radio frequency interference, reducing risks of downtime or latencies. Finally, CXP is supported by GenICam, an application programming interface standardized by the European Machine Vision Association. Widely adopted by many industry partners, GenICam accelerates and simplifies application development or upgrading components.

Multi-camera architectures are widely used in industrial inspection on the basis that they increase accuracy by capturing multiple angles of an object. For example, in a four camera system, two side views and the top and bottom of an object can be captured simultaneously, precisely triggered on all four channels of a frame grabber. Synchronization and control mean that the four cameras effectively act as one, even if they are operating at different speeds or resolutions. Think of the advantages such a system brings to a bottling operation: the four cameras could inspect fill level, product labels, bottle caps, and container molding at the same time.

In addition to more inspection detail, multi-camera systems are often used to yield a larger field of view (FOV). FOV is the size of the area that is being captured. If a part is six inches long, for instance, the FOV needs to be slightly larger than six inches, assuming the staging can position the part within this FOV. More cameras equate to more workable FOV. 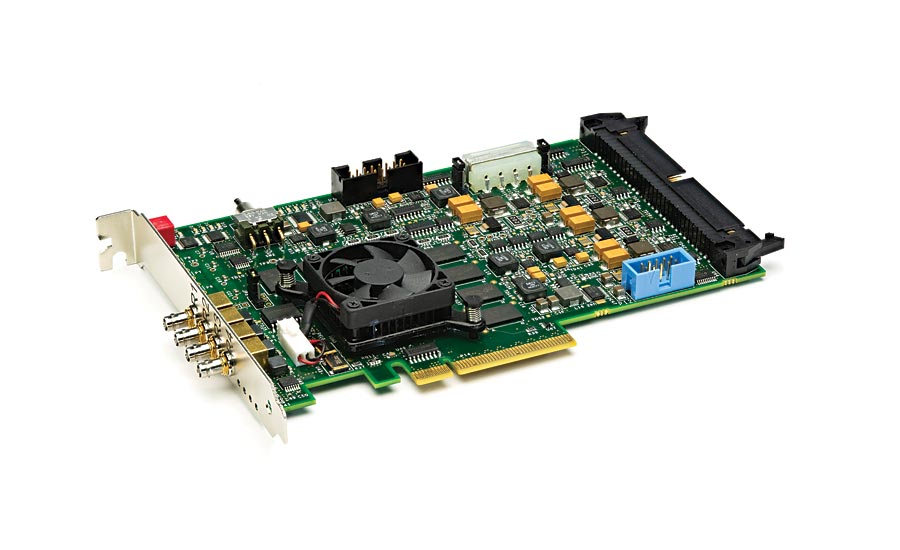 Here is a CXP2 frame grabber.

IS GIGE VISION THE ANSWER?

Only GigE Vision can compete with CXP on cable length in multi-camera systems. Going head-to-head with CXP 2.0 is the new 10 Gigabit Ethernet (10 GigE Vision) interface. It provides a tenfold increase in data transmission speeds over its predecessor, GigE, and was specifically targeted for high-speed testing environments.

Unfortunately there are some serious drawbacks. For one, 10 GigE Vision is exceptionally power hungry. It requires up to 7 Watts for operation, not including the cameras’ power requirements. Power consumption is roughly twice that of other interfaces. Nor has 10 GigE shown itself to be efficient with handling heavy data loads. It leans on the PC’s CPU and internal memory bus for operation because processing and buffering cannot be offloaded to a frame grabber FPGA or to memory. PnP discovery and operation is also required under all circumstances, making for a complex system subject to bottlenecks. And while power over cable and real-time triggering are said to be planned for its next version, 10 GigE does not offer them now. Ironically, high-data applications using 10 GigE actually need a frame grabber to offload CPU and memory, therefore eliminating what was the principle benefit of the standard over CXP. Cost benefits of GigE Vision are further diminished because expensive, high-end server components serve as its backbone. All things considered, 10 GigE appears to be a step backward, rather than forward.

Similarly, USB 3.1 Vision (SuperSpeed+) has fallen short of expectations. Limited to one to three meters with a passive cable, USB 3.1 Vision requires expensive active cables for each camera on a typical system. Again, like 10 GigE, there is a cost trade-off that reduces the CXP vs. USB 3.1 Vision argument to a toss-up when you factor in newer, smaller and economical CXP cameras. Other downsides to USB 3.1 have proven to be significant latency and image jitter, lower PoC wattage and the simple fact that it cannot go beyond 1.25GB/s (10 Gbps). 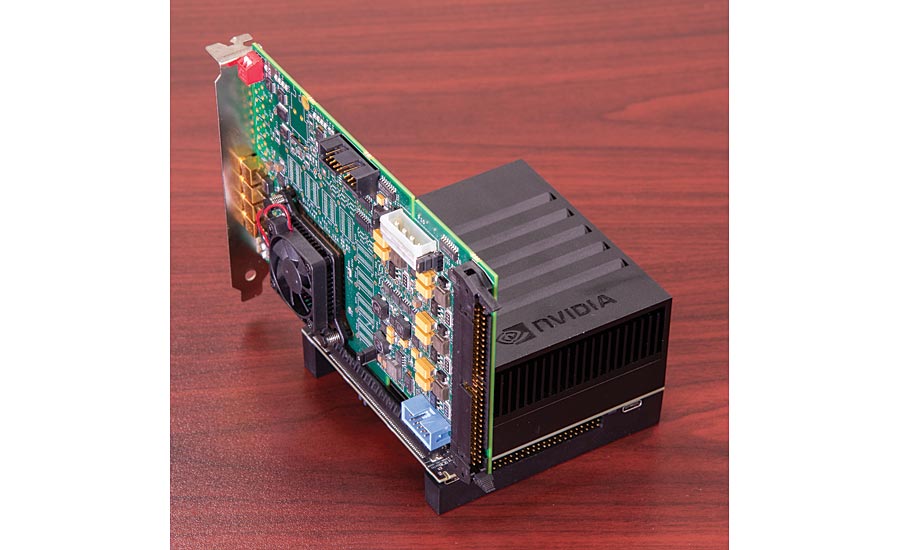 As stated earlier, multiple camera systems have been a fixture in machine vision for decades. What is new is the use of CXP. It allows multiple cameras to be linked by a single frame grabber over long, inexpensive and very robust coaxial cables with zero latency and exact synchronization. Various resolution cameras set at high or low frame rates can be linked to a single CXP frame grabber, each performing a different inspection task. Even CMOS and CCD cameras can be mixed in the configuration.

One of the arguments against CXP is that it requires a frame grabber, an expense that USB3 and GigE Vision dodge. Mistakenly, the impression is given that a multiple-camera system based on CXP is therefore more complex and expensive. Yet this ignores the fact that the load on the PC significantly increases with USB3 and GigE Vision. What savings are realized with USB3 are quickly negated by the cost of additional computing resources. And an expensive network card must be purchased for GigE Vision for proper operation. So much for savings. 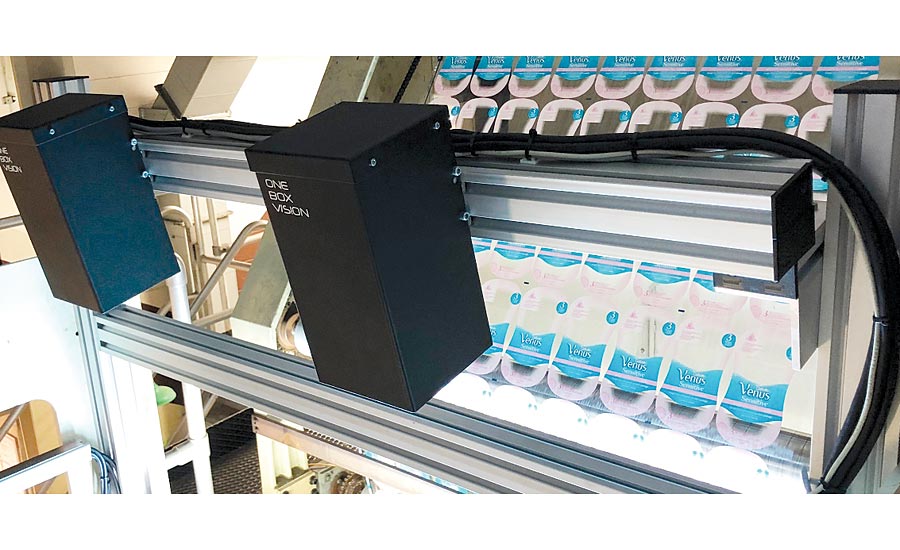 The frame grabbers are used in the One Box Vision PackFlow print inspection system.

Here is another important point: The required precise synchronizing of cameras in a multi-camera configuration is the byproduct of a deterministic interface. Both CXP and Camera Link are inherently deterministic. GigE Vision and USB3 are not. Workarounds are possible yet these steps invite unstable performance and data latency when nodes are added or when bandwidth is shared due to packets being dropped. As Camera Link is not an option for high-speed multi-camera systems this leaves CXP as the only practical choice.

In the end, CXP’s strongest suit is its speed. To increase data rate further, multiple links are used. Its scalable architecture provides the opportunity to tap 6.125 Gbps of bandwidth per camera per link on a quad-link CXP frame grabber, or a total of 25 Gbps for a single quad-link camera using all four cables at a time (50 Gbps in CXP 2.0). The key takeaway here is that CXP bandwidth is not shared, as is the case with GigE Vision of USB3, both of which are essentially consumer interfaces. V&S