This website requires certain cookies to work and uses other cookies to help you have the best experience. By visiting this website, certain cookies have already been set, which you may delete and block. By closing this message or continuing to use our site, you agree to the use of cookies. Visit our updated privacy and cookie policy to learn more.
Home » Supply, Demand and Cost: Don’t Let That Helium Just Drift Away at the End of a Leak Test
Test & InspectionNDT
NDT Leak Testing

Supply, Demand and Cost: Don’t Let That Helium Just Drift Away at the End of a Leak Test

How can you make the most of this increasingly precious commodity for your critical quality assurance needs?

Helium is in short supply and its cost is rising. Global sources may even run dry by the end of the century. And yet, it remains the dominant choice for trace-gas-based leak-testing on the production line. How can you make the most of this increasingly precious commodity for your critical quality assurance needs?

The answer is to institute an effective reclamation process at the leak-test station. But first, let’s recap why helium is so ideal for trace-gas leak testing and why we face a global shortage.

For leak testing, the ideal trace gas should:

Out of this list, with the exception of the last two, helium has no match. Its 5ppm ambient presence in atmosphere (see table), inert nature and very small atomic dimensions make it ideally suited for use as a trace gas.

Why the increasingly acute shortage?

Helium may be the second-most abundant element after hydrogen in the observable universe, but it’s relatively rare on Earth. Our supply is finite and we haven’t yet figured out a way to artificially produce it at scale that isn’t obscenely expensive. Nor do we have a viable way of capturing and bottling that 5ppm that’s present in the atmosphere. 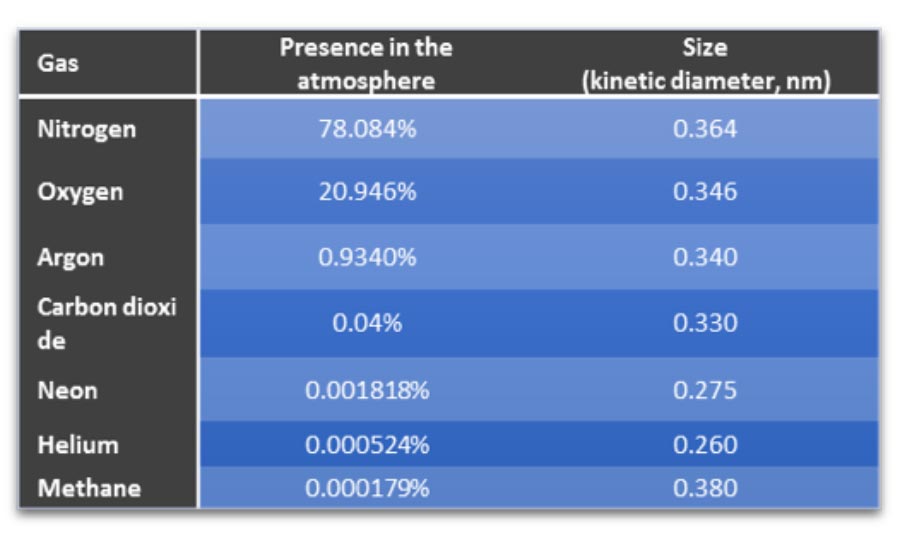 Table 1: Composition of Earth's Atmosphere. (Click here to see a larger version of the table)

Most helium on earth is a product of radioactive decay, deep underground. For large-scale use, it is extracted by fractional distillation from natural gas, which can contain as much as seven per cent helium. So, it’s a direct commercial byproduct of the global oil and gas industry—an industry that may now face peak demand.

More than 75 percent of the global annual supply of helium has come from America’s oil and gas fields, with most of that sent by pipeline to the National Helium Reserve near Amarillo, TX. But this reserve is expected to be largely depleted in a year.

All of which paints a fairly bleak picture. We are running out of helium and, unlike fossil fuels, there is no plant-based (ethanol) alternative.

The importance of helium reclamation

The best hedge against supply issues and surging costs is to use, and waste, as little helium as possible during each cycle of the leak test. Helium’s nature doesn’t make this easy. It is so light Earth's gravity can’t even reliably hold on to it.

What is the most effective and efficient reclamation approach? It’s important to consider the following factors:

Such a system can reclaim up to 95 percent of the helium used during the test cycle. The higher the efficiency of the system, and the higher your rate of consumption, the faster the return on your investment in a reclamation system. 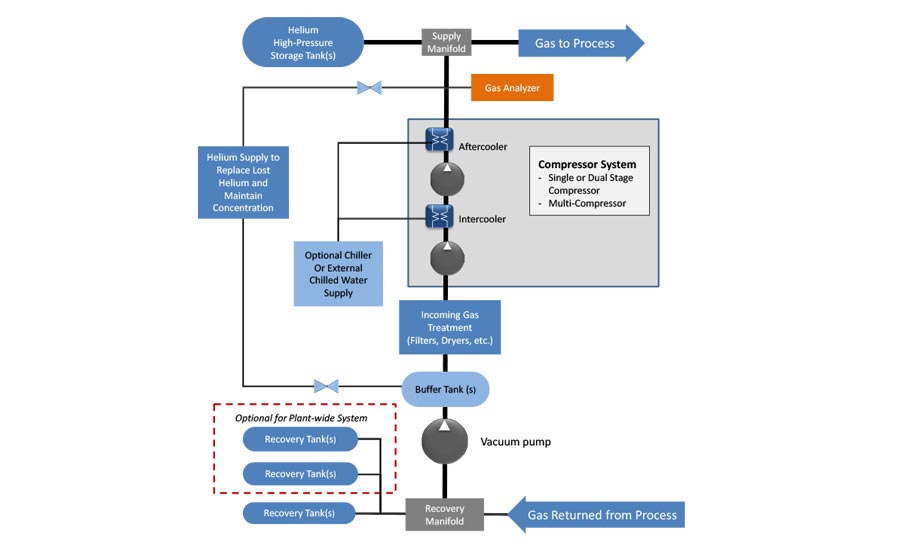 The percentage of helium in the tracer gas charge is a parameter that must be considered carefully. Many leak testing applications call for a helium concentration of 90-95 percent. In some cases, switching to a lower helium concentration can be a significant cost saving as long as the leak rate specification is adjusted as well.

For example, if the original leak rate specification calls for a 1x10-3 scc/sec (standard cubic centimeter per second) leak rate with 100 percent helium, dropping the reject level to approximately 5x10-4 scc/sec allows one to test using only a 50 per cent helium mixture.

The tradeoff is that you may have to compensate for this reduction in helium concentration by increasing the pressure in the test part or decreasing the vacuum in the test chamber.

For the most efficient system, the helium concentration should be 50 percent or higher. With larger part volumes and higher test pressures, however, it becomes financially viable to reclaim the helium from more diluted test mixtures—as low as 20 percent. 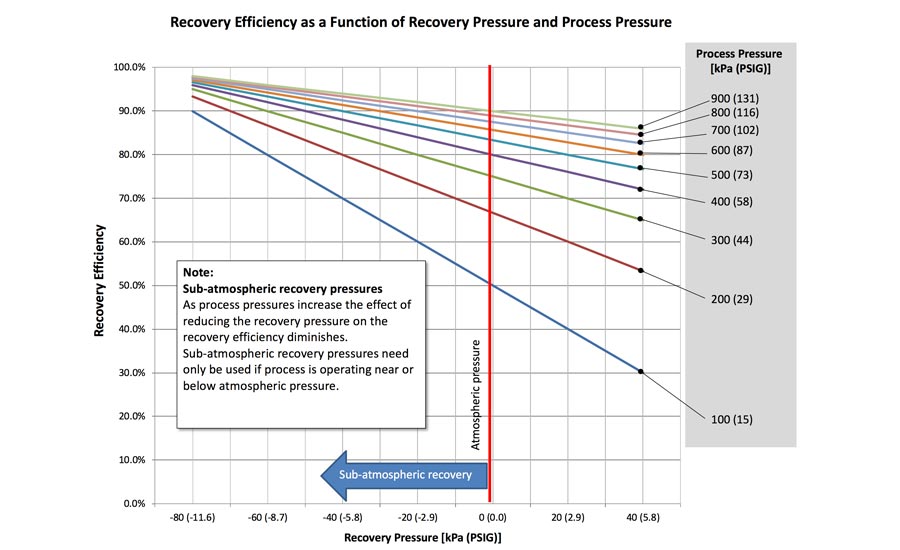 Efficiency is the most important characteristic of a reclaim system—defined as the ratio of the helium “lost” (exhausted to the atmosphere) versus the amount recovered.

The higher the test pressure, the easier and cheaper it is to recover the helium and pressurize it back up to the working test pressure. The less complex and costly the reclamation system therefore has to be. Lower, sub-atmospheric test pressures, on the other hand, require a more costly full vacuum system to ensure that helium doesn’t escape. Otherwise, the system may reclaim only 10 to 20 percent of the helium. This will require a sizeable, and much more costly, top up before the mixture is ready to be used for the next test cycle.

Bear in mind, of course, that the application will dictate what the actual test pressure must be to ensure a reliable and repeatable test.

Or, just don’t use helium

Another option is to avoid using helium altogether. This is certainly a viable choice— depending on the application and the test method. A common and cheap alternative (even cheaper if you have the means to mix it yourself) is forming gas. This mixture is five per cent hydrogen and 95 percent nitrogen. This ratio ensures the hydrogen doesn’t pose a flammability risk.

Hard Vacuum Leak Testing: Using hydrogen in place of helium in a vacuum for trace gas leak testing is challenging because the metals most commonly used to construct the test chamber (e.g. stainless steel) outgas the large amounts of hydrogen absorbed during the manufacturing process. This can create such high levels of unstable background that detecting small leaks becomes impossible. Modern data analytics and digital controls can effectively compensate for and control this undesirable background contamination in some applications.

Accumulation Testing: With any leak rate specification as low as 1x10-4 scc/sec, forming gas can be swapped for helium. We have found that the five per cent concentration of hydrogen reacts about the same as a 50 percent helium. But with any lower of a leak rate, helium must be used.

Carrier Gas Testers: This test method is not a well suited for forming gas as a substitute. However, it does lend itself to some experimentation with diluted helium concentrations.

Nitrogen Purge Technology: Forming gas or helium work equally well with any leak rate specification down to 1x10-5 scc/sec. Below that, helium remains your best choice.

Reduce, reuse, or use something else—between a good reclamation system and other trace gas options, you can ease your reliance on a constant supply of fresh helium. This is your best hedge against rising cost and supply issues as this rare gas becomes increasingly scarce.  NDT

Jeff McBee is a global product manager – HVAC R and appliance for Cincinnati Test Systems. He has worked in the test solutions industry for 30 years in various roles, including engineering, service/product management, business development and regional sales management. Contact him at JMcBee@cincinnati-test.com.

Gordon Splete is a global product manager at Cincinnati Test Systems. For 25 years he has partnered with CTS customers providing technical leak test solutions for all industries and leak testing techniques (dunk, pressure decay, flow, and trace gas applications). Contact him at GSplete@cincinnati-test.com.

Is Your Sealed Device Leak Testing Method All Wet?

Leak Test 101: The Basics Rule, No Matter How Much Technology Evolves

Selection Considerations for your Optimum Leak Testing Method and Process