As applications and markets diversify their environmental profiles, the technology and optics must do the same.

Imaging lenses are critically important components for systems deployed in all types of environments such as factory automation, robotics, and industrial inspection. Lenses and cameras are now being integrated into spaces that were not common or possible in the past. Standard imaging lenses may not function or be able to withstand the extreme environmental temperature, moisture, vibration, or shock of many applications. However, imaging lenses can be modified in a few key ways to withstand one or more extreme environmental conditions. Ruggedized imaging lenses are available in three different options: industrial, ingress protected, and stability ruggedization.

Standard imaging lens assemblies typically have various moving components. To allow for a manually adjustable focus, most lens assemblies rely on a system of concentric threaded barrels. The focus ring rotates and the inner barrel, which contains the lens elements, slides forward and backward relative to the outer housing, which remains stationary. There is also an adjustable iris diaphragm with several thin metal leaves that controls the f-number of the lens. The most common way to hold the focus and iris positions in place is to tighten the rings and barrels that control them with thumb or set screws. Due to the multitude of moving parts involved in the construction of a lens, the system is susceptible to changes in focus and in aperture due to the influence of environmental factors, namely shocks and vibrations. 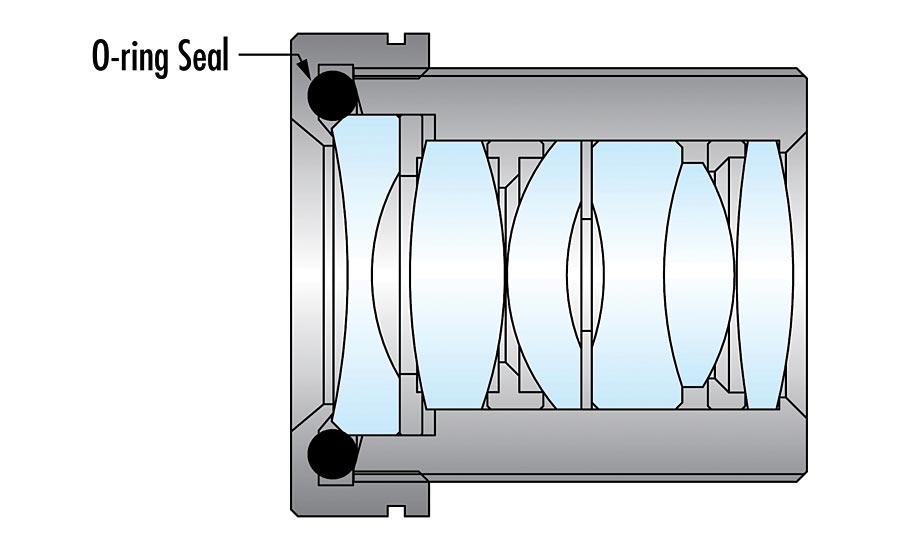 Figure 2: Ingress protection ruggedized lens utilizing an O-ring to seal out contaminants such as moisture and dust.

Industrial ruggedization of imaging lenses removes the most vulnerable components in a standard lens assembly, making it perfect for setting the lens to the proper configuration and trusting that it will remain that way. Industrial ruggedized lenses utilize a fixed aperture, replacing the iris diaphragm with a thin metal annulus. The multi-barrel focus mechanism is also replaced with single threaded focus barrel. The outer portion of the lens is stripped down, exposing the inner barrel holding the lens elements. Multiple set screws along the perimeter of the lens tighten to lock down the lens once it is set to the correct focus position. An illustration of the mechanical differences between a standard and industrial ruggedized lens can be seen in Figure 1. Once a lens is integrated into an industrial of factory environment, there is no need to change the f-number of the lens, or to manually adjust focus. Those additional features could alternatively serve as potential failure points to be perturbed by shocks or vibrations, halting a production line or inspection process.

In addition to the improved durability and practicality of industrial ruggedized lenses, they also present attractive cost and size benefits. A significant portion of a lens’ cost comes from the manufacturing and assembly of the metal components that form the housing. A more complex housing construction includes dozens of individual metal components and more time in assembly. The streamlined design present with industrial ruggedization reduces the amount of metal used and makes the assembly process quick and efficient. Less metal also reduces the weight and footprint of the final imaging lens, making it ideal for weight- and space-sensitive applications like mounting on drones or integration into small compartments in larger inspection devices. 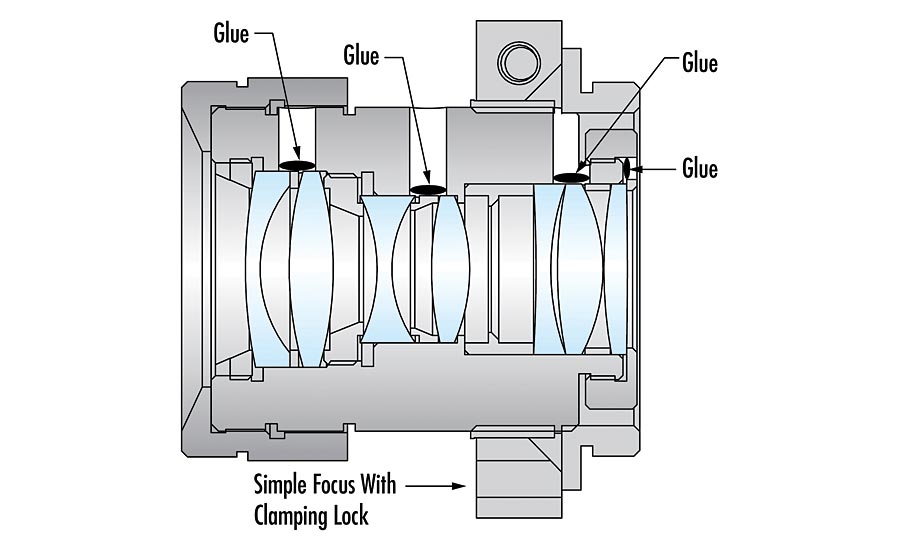 Ingress protection ruggedization is the next step in prolonging the lifetime of a vision system, primarily in environments with significant moisture and dust. Standard imaging lenses are not sealed to be water- or dust-tight. There are multiple locations along the lens body where components are threaded and slotted together. These serve as pathways for debris and water to enter the lens and ruin it. The best approach to solving this issue is to modify the design of an industrial ruggedized lens with O-rings. The simplified mechanics of industrial ruggedized lenses eliminate many of the entrances for moisture and dust because the lenses are housed in a continuous metal barrel, but the front of the lens would still otherwise be susceptible. Placing O-rings between the housing, front lens elements, and front lens retainer complete the seal and protect the package from environmental contaminants.

Additionally, preventing buildup of water on the lens surface can be required in splash heavy applications. As a result, it is important to include a hydrophobic window in the front of the ingress protection ruggedized lens assembly. The hydrophobic antireflection coating on the front surface of the window lessens the adhesion of water to the substrate, causing it to bead up and roll off the surface. Ingress protected ruggedized lenses are ideal for applications in the food and beverage industry, along with pharmaceutical applications, due to the frequent washdowns of materials and inspection surfaces. These lenses also serve the needs of outdoor vehicles such as cars and drones. 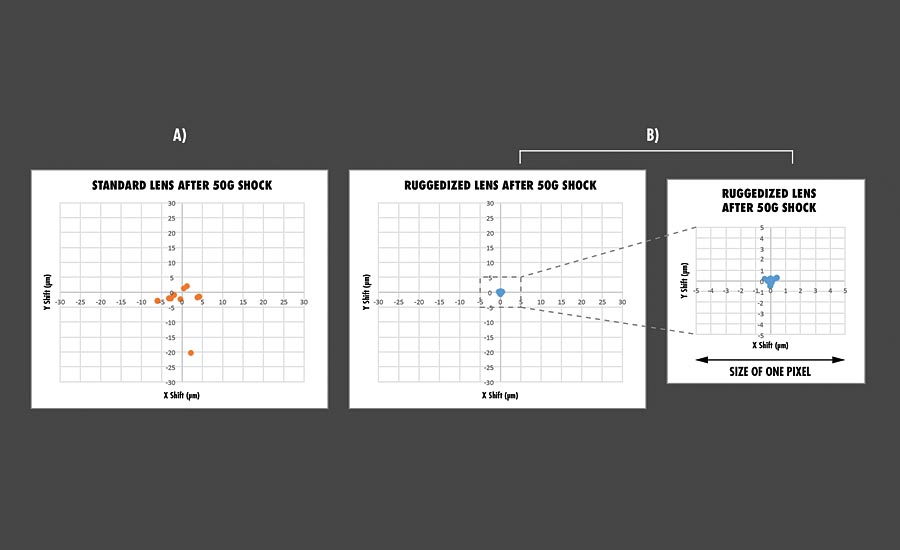 Stability ruggedization is an amplification of industrial ruggedization. This style of lens design also protects the lens from damage and stops the settings from drifting while in the field but adds an additional emphasis to optical pointing stability. Once again, the best approach is to use a fixed aperture and simplify the focusing mechanics. However, the focusing mechanism is slightly different in a stability ruggedized lens. A steel C-mount clamp controls the focus position of the lens. Instead of fixing the lens with discrete contact points via set screws, the clamp provides a continuous point of contact around the lens barrel, preventing even the slightest shift in focus once tightened.

An additional feature in the assembly process is to glue the individual lens elements in place. Standard lenses are often assembled using a drop-in process where the elements and spacers slot into the seats and grooves of the inner housing. They are then held in place by a retainer ring that is glued at the end of assembly. While this construction is fine for many situations, it does not suffice when highly-precise optical pointing stability is needed for the application, especially in applications involving shock and vibration. Using only a front retainer ring to hold the lens internals in place allows them to shift laterally within the barrel. While the space between the edge of the elements and the inner bore of the barrel is on the order of 50 microns, shifts of tens of microns will have significant effects; after sustaining vibration and shock, the elements decenter and alter the pointing position of the optical system. Gluing each element in a stability ruggedized lens prevents them from decentering in turbulent environments. Figure four compares the pointing of a standard and stability ruggedized lens after experiencing a 50G shock.

The shift in pointing of a standard lens after a 50G shock can range from 1 to 20 microns. A stability ruggedized version of the same lens will consistently show a change in pointing of less than 1 micron after experiencing the same shock. Stability ruggedization is essential for applications where the field of view needs to be calibrated and maintained for high precision. Some of the specific application spaces include measurement equipment, 3D stereo vision, sensing for robotics, and tracking object position. The stabilization of optical pointing required in these applications is often smaller than one pixel.

Industrial, ingress protected, and stability ruggedization are important developments in a continually evolving machine vision industry. As applications and markets diversify their environmental profiles, the technology and optics must do the same. V&S

Machine Vision Applications: The Process of Developing a Complete Solution