The wavelengths used in any machine vision application have significant implications in choosing the ost appropriate lens.

Lenses play a crucial role in the quality of the images produced by a machine vision system since they determine the sharpness of the image on the camera sensor. Lenses can influence image quality in a variety of ways:

By choosing the appropriate lens construction, all of these effects can be minimized.  This article highlights some of the considerations when selecting a lens for your particular needs.

As lenses transmit light the first consideration is the wavelength of light used, as this has a major influence on both chromatic aberration and light transmission. This is of particular importance in lens design with the increasing use of infrared and UV radiation as an alternative to visible light to reveal information that could otherwise not be seen. While broadband light radiation is essential in some applications such as color imaging, using monochromatic illumination allows the best wavelength-related lens performance to be realized, irrespective of the wavelength chosen.

In general, around 4% of the light passing from air through a glass lens will be reflected at each interface, meaning that 8% of the incident light is lost. Using a thin anti-reflective coating on the lens surfaces reduces these reflections and significantly improves light transmission. Broadband coatings can be used for color imaging, but the best transmission comes from using a monochromatic light source together with a lens coating designed for that specific wavelength. Using a wavelength outside of the coating wavelength range could actually reduce transmission.

When different wavelengths of light pass through an air-glass interface, each wavelength is refracted by a different amount. This dispersion is a measurable quantity and results in the chromatic aberration produced by lenses, with fringes blurring the object’s edges, making accurate machine vision measurements impossible. Hundreds of different optical glass types with different dispersion characteristics are available, making it possible to produce achromatic lenses with a variety of glass elements to compensate for chromatic aberration effects (Figure 1). Much simpler lens designs are needed when using monochromatic light sources as there is no chromatic aberration. 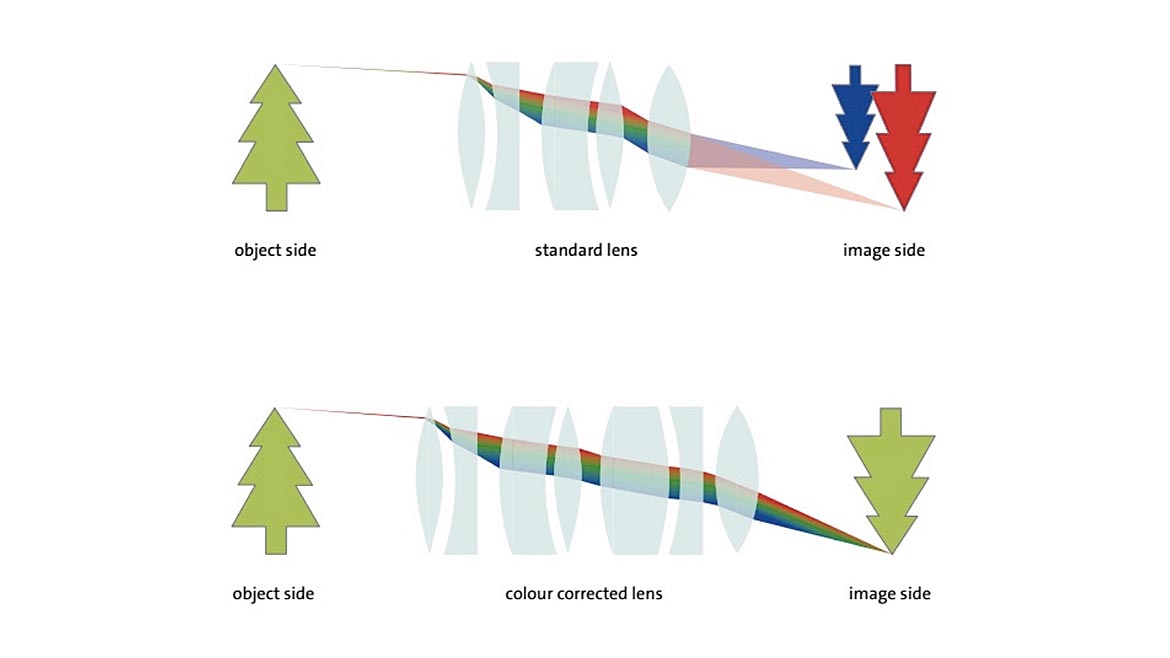 Line scan imaging is used for the inspection of continuous material and imaging objects on a conveyor belt, especially where the objects vary in length. Images are built up one line at a time by scanning the camera’s line sensor at high speed as the object passes underneath. The resulting short pixel exposure times compared to area scan imaging make lens transmissibility an important factor in getting sufficient light to the sensor. Sensors are available in resolutions up to 16K pixels and can be comparatively large – a 16k resolution, 5 x 5 µm pixel monochrome line sensor has a length in excess of 80 mm. Large format lenses therefore must be used to ensure illumination of the entire length of the line array without mechanical vignetting where the light beam is blocked (normally by the lens mount), causing shading towards the edges of the image. Anti-reflective lens coatings are crucial in maximizing light throughput. Color line scan imaging, however, utilizes the entire visible spectrum from 400 – 700 nm so achromatic lenses with a broadband anti-reflective coating are needed to remove chromatic aberration and improve transmission. There are also a variety of different camera configurations (Figure 2) available. In single chip cameras, the output from two or three adjacent lines on the sensor is combined to generate an RGB signal while in three or four-sensor cameras, light from the object is collected into a prism which separates the RGB components (and near infrared (NIR) in four-chip cameras) for simultaneous detection by the individual sensors. This arrangement uses a common optical path making it more suitable for imaging 3D objects or randomly moving products without spatial displacement problems, as the R, G, B and NIR pixels are coincident for any given object position. Lenses used with prism-based cameras require special designs to compensate for the different optical paths and focusing characteristics within the camera. In order to avoid mechanical damage of the prism, rear protrusion of the lens must also be kept very low. 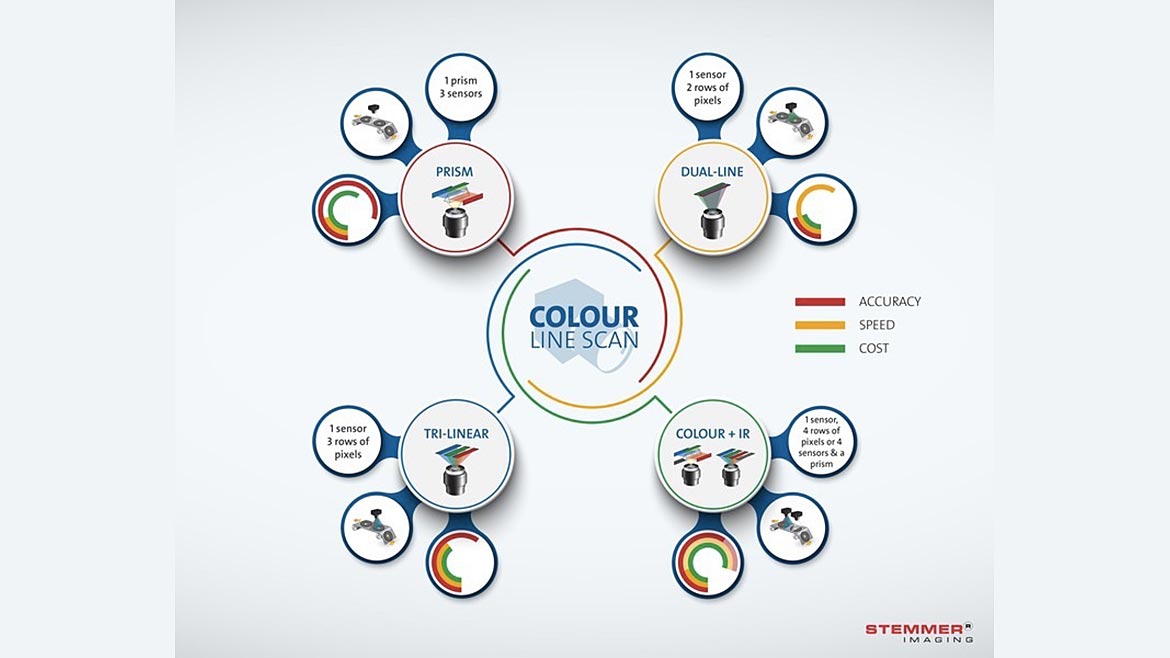 The near infrared (NIR) extends from 700 nm up to 1μm. Conventional CMOS sensors have some NIR sensitivity and versions with enhanced sensitivity above 850 nm are becoming more common. NIR can reveal subsurface features such as decay, mechanical bruising and pest damage in foods such as fruit, vegetables, nuts and meat. NIR illumination can also penetrate some dyes and inks, making it possible to inspect products through printed packages. There are also applications in the wood, textiles, paper, glass, tiles and electronics industries and for the inspection of labels on cylindrical items such as cans, bottles, pens etc. or even rotating objects. In addition, using pulsed NIR light sources in conjunction with NIR pass filters eliminates any unwanted effects due to fluctuations in the ambient light. If simultaneous NIR and color imaging of an object are important, using two separate cameras can present problems in getting accurate registration between the two images. A multi-sensor prism camera is a powerful alternative. Here the prism separates light from the sample into visible and NIR wavelength channels equipped with individual sensors to give exactly the same field of view for both images (Figure 3). Lenses used with these cameras must be well matched to the optical characteristics of the prism. 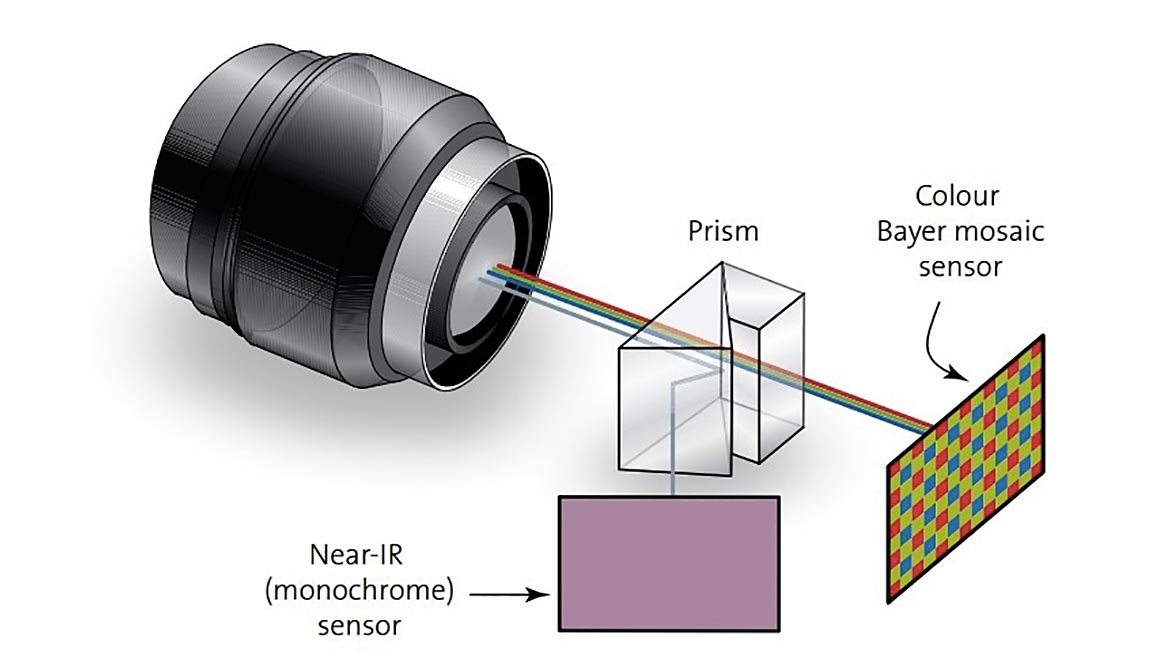 Short wave infrared (SWIR) ranges from around 1 - 5µm, although many cameras are optimized to operate in the 0.9 – 1.7µm region. These cameras need special detectors such Indium Gallium Arsenide or Mercury Cadmium Telluride. SWIR cameras produce monochrome images similar in resolution and detail to those from visible light but there are fewer commercial optical glasses available for lenses in this waveband. These glasses generally offer low dispersion which further decreases with increasing wavelength, so some elements of more expensive, high dispersion specialty glasses may be needed to produce achromatic lenses. Crystalline infrared materials, such as zinc selenide and calcium fluoride, offer high dispersion performance, but these are much less mechanically robust than glass and also more expensive, so most SWIR lenses continue to be made from glass with anti-reflective coatings. Water strongly absorbs light in the SWIR region, leading to a host of moisture distribution detection applications in farming and agriculture as well as checking fill levels of aqueous liquids in bottles. The transparency of silicon to SWIR radiation enables subsurface semiconductor and solar cell inspection including the detection of impurities in semiconductor crystal ingots and cracks in polycrystalline material while in recycling, plastic materials can be differentiated. The distinctive “fingerprints” resulting from the selective absorption of SWIR wavelengths by organic materials and plastics according to their composition can be used to uniquely identify them using hyperspectral imaging. This combines infrared spectroscopy with machine vision to produce images which are color coded according to the chemical composition of the objects being imaged (Figure 4). SWIR imaging can also measure temperatures between 250 C and 800 C making it useful in the inspection of hot glass materials early in fabrication and in welding applications. 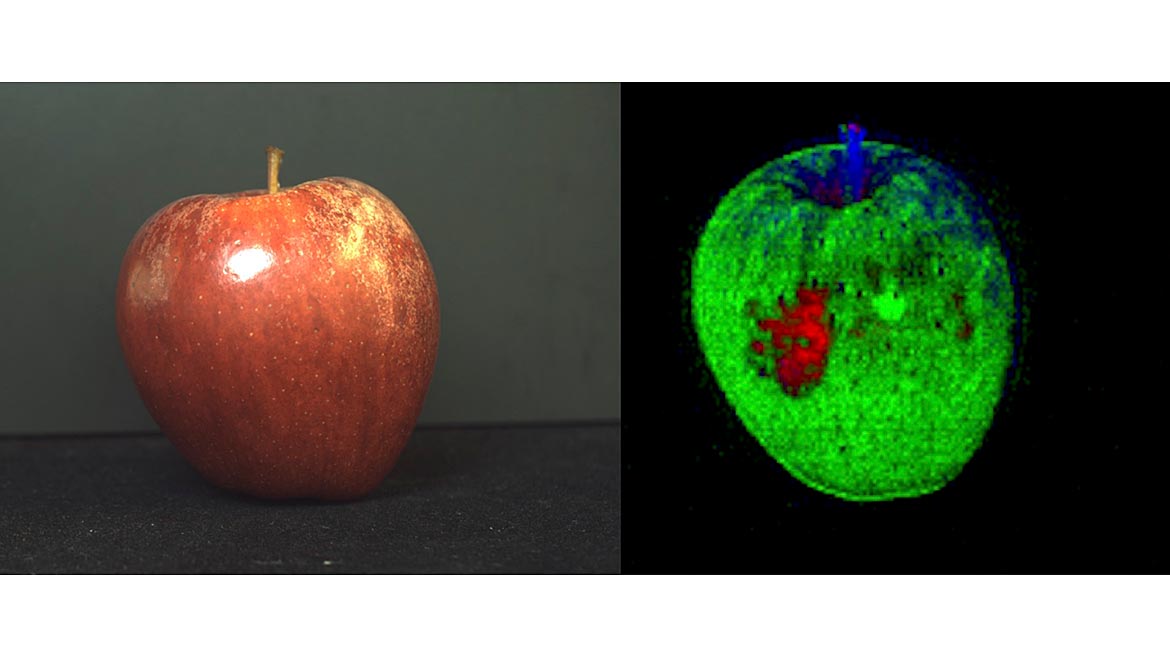 Figure 4. The red area in the hyperspectral image reveals subsurface bruising not visible in the color image. Source: Stemmer Imaging (Click on the image to enlarge.)

The long wave infrared (LWIR) waveband ranges from 8-14 μm. LWIR cameras featuring microbolometer sensors enable high accuracy surface temperature profile measurements up to 250 C using naturally emitted radiation (thermography). Heat radiation can be detected over long distances, in total darkness, and also through fog, dust, rain and smoke. Applications include surveillance, security and rescue and recently for fever screening of humans during the Covid-19 pandemic (Figure 5). Industrial applications include nondestructive and in-process testing. LWIR optics are generally made from germanium or chalcogenide materials such as Ge33As12Se55. Chalcogenides have similar optical and mechanical properties to germanium but different refractive indices. They can be paired with germanium in an IR achromatic doublet lens but comparatively low transmissibility makes broadband LWIR anti-reflective coatings essential to increase the performance and durability of the lenses. 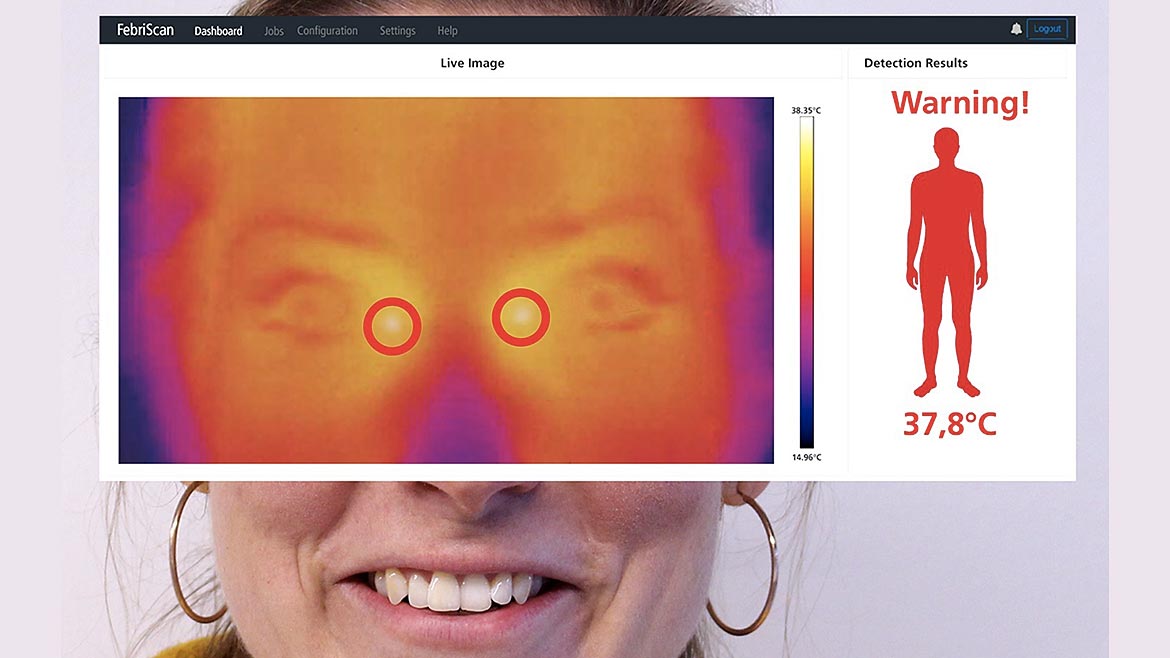 UV imaging systems offer higher resolution capabilities than visible light, enabling submicron features to be resolved. This is particularly useful for detecting scratches and defects on polished or highly specular surfaces as well as very small surface details in products such as printed circuit boards, documents and credit cards. As glass attenuates UV light, Quartz lenses can be used for both UV-A (320 – 400 nm) and UV-B (290-320 nm) illumination and achromatic doublet lenses can be constructed.

The wavelengths used in any machine vision application have significant implications in choosing the most appropriate lens, with more complex lens designs needed for broader spectral ranges. However, other factors must also be taken into account, including other defect and aberration corrections, as well as the physical environment in which the lens will be used. With a vast range of lenses available on the market, it can be useful to work with expert vision technology suppliers who can take a holistic approach to the imaging requirements. For sure, no one manufacturer offers the right optical solution for all applications so independent advice is a good first step.