Additive Drives the Adoption of CT for Nondestructive Internal Inspection

CT provides unparalleled insight into a 3D structure, including its density at every point throughout its volume.

Many components and assemblies have internal features that are difficult to inspect, none more so than additively manufactured parts. Conventional quality control requires samples to be sectioned and subsequently scrapped. However, the advent in the 1980s of X-ray computed tomography (CT) for industrial material analysis and nondestructive testing heralded a new era for inspection of such parts, both internally and externally. Since then, the technology has progressed enormously in terms of its refinement and scope so that today, incredibly detailed 2D radiographs and 3D image volumes with a high signal-to-noise ratio may be acquired.

In 2005, CT was first used for dimensional metrology. It is one of the very few techniques that can measure features inside a component without destroying it. External measurement is of course equally possible. The range of applications is now huge, from the metrology room to the production line for 100 percent inspection, with options for automated component handling and feeding back measurement data to adjust manufacturing parameters.

Like magnetic resonance imaging (MRI), which uses non-ionizing radio frequency radiation to detect the magnetic resonance of hydrogen molecules, ideal for examining soft biological tissues, X-ray CT employs ionizing radiation and measures the absorption of X-rays to image the internal structure of objects or patients. Unlike MRI, however, it is able to examine denser materials and even metals. This article looks at some of the breakthroughs that have come along in CT inspection over the last 40 years and in CT measurement during the past quarter century.

A CT machine comprises an X-ray source, a manipulator for rotating the sample through 360 degrees and a detector that captures X-rays that are not absorbed by the workpiece. A 2D grayscale radiographic image is produced for each rotation position of the specimen. The amount of attenuation is determined by the distance travelled through the material and by its composition and density, as well as by the energy level of the X-rays. After penetrating the workpiece, the attenuated X-rays are typically captured by a flat panel detector.

Reconstruction of a component based on the projected images leads to a voxel (3D pixel) grayscale model. The voxel data is post-processed using algorithms to detect the edges and features of the workpiece, allowing dimensional measurement and quality control. The big advantage of CT is that it eliminates the superposition of images of structures outside the region of interest. 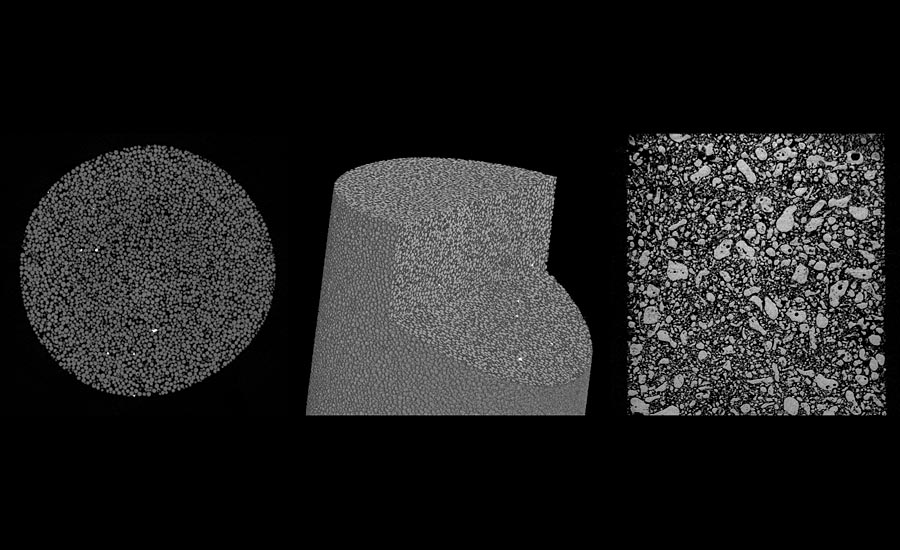 The X-ray source may be either open (continuously pumped) or closed (sealed). It has a filament emitting electrons that are accelerated onto a target, where they produce X-rays. One of the principal advances in recent years has been the appearance of high voltage microfocus X-ray sources, which are now available up to 450 kV. Microfocus tubes have an electromagnetic lens to focus the electrons onto the target and therefore have a smaller source of X-rays. The combination of high energy and high resolution means that the image of an object can be magnified with minimal blurring onto a large detector with a thick and hence more efficient scintillator, delivering highly detailed images after short exposure times.

At around 80 µm, depending on the power, the spot size is typically five times smaller than that of minifocus sources, so the level of detail that it captures is beyond comparison. Users benefit from better visualization through superior resolution and accuracy as well as the ability to tackle a wide range of applications. Lower voltage microfocus sources have spot sizes down to 3µm and special high-resolution sources offer 1µm. If one tried to achieve equivalent resolution by reducing the pixel size of the detectors rather than the spot size, there would be a serious reduction in detection efficiency proportional to the cube of the pixel dimension, due to the smaller area of the pixel and it being multiplied by the reduced thickness.

An advantage of the open-tube design is that the filament generating the electrons can be replaced inexpensively in minutes. In contrast, sealed tubes are expensive to replace when they fail. An open-tube filament exchanged in-house by a user reduces downtime to a matter of minutes rather than days, allowing long lifetime, consistent image quality and reduced cost of ownership.

The target that the emitted electrons hit to produce the X-rays is a crucial part of the source. Most are made of tungsten and are angled to allow the X-rays to reflect off in the direction of the specimen under investigation, although some are designed so that the X-rays are transmitted through it and, due to the reduced target thickness, can achieve higher magnification.

A notable advance in the reflecting type is the high brilliance rotating target in an industrial microfocus system. It dissipates heat during X-ray generation, allowing a smaller spot size for a given energy and power. It ultimately leads to better resolution, higher quality images with less geometric unsharpness and allows greater image magnification. A liquid-cooled, rotating target enables the power to be increased four-fold without degrading the spot size. It permits either faster CT data acquisition by taking more radiographs in a given time without sacrificing image quality, or higher data accuracy and resolution in the same time.

Once the X-rays have left the source and passed through the specimen, they need to be detected to produce a 2D image. Most CT systems are available with a flat panel detector for radiography and 3D cone-beam CT, although others use a linear detector. Some of the latter are curved to allow 2D fan-beam CT using a constant X-ray path length, raising X-ray sensitivity and optimizing their collection without capturing undesired scattered rays, which increase with the density of the sample. Stunning image sharpness and contrast are delivered, as image pollution and associated contrast reduction are avoided, providing critical insights into the component being examined. The superior measuring accuracy and small feature detection mean that individual additively-manufactured components and complex assemblies may be inspected with speed.

Another characteristic of top-end CT systems is motorized FID (Focal spot to Imager Distance), allowing the detector to be moved closer to the source. A shorter FID raises the X-ray flux, reducing the scan time. Alternatively, it can give brighter images when using low energy X-rays. Both are advantageous when high magnification is not a limiting factor.

Research is ongoing to broaden the application of CT in the field of dimensional metrology for quality control. Trials have been carried out involving a microfocus X-ray source placed in machines with improved rigidity, linear scales, better cooling and other enhancements to provide increased accuracy and repeatability rivalling conventional metrology. For some components and depending on the application, the measuring uncertainty both internally and for outer dimensions can be as low as 10 microns. 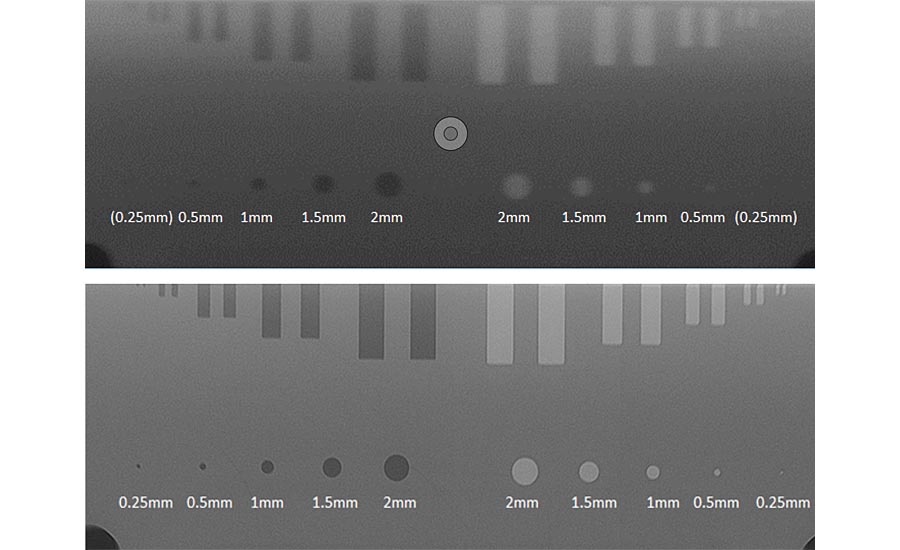 Other issues under investigation are optimizing X-ray illumination, adjusting the gray level thresholding parameters for dimensional measurements, lowering the X-ray spot size for greater resolution and increasing the power of the source for greater penetration into larger metallic components.

Another research topic is the correction of beam hardening, a common problem with a polychromatic CT source whereby lower energy X-ray photons are more easily absorbed by the workpiece material. Only higher energy X-rays can penetrate right through larger or denser components, resulting in their appearing not to absorb those X-rays so much and therefore to be of lower density. This gives the impression of a high-density skin around components when in fact this skin is only absorbing all the lower energy X-rays that are unable to penetrate the whole sample. Beam hardening is undesirable when studying material composition and can be corrected by filtration and by software. However, for metrology, consideration is being given to harnessing the effect to increase edge definition, making it easier to measure accurately the outside dimensions of a specimen.

CT provides unparalleled insight into a 3D structure, including its density at every point throughout its volume, but information is also available in a fourth dimension, time. Temporal CT can be of two types: time-lapse, involving taking traditional scans at specific intervals; and continuous acquisition to collect projections of an object as it changes and subsequently to reconstruct subsets into several volumetric time-series.

Temporal resolution can be improved at those times when the sample is changing quickly whereas spatial resolution can be very high at other, more stable times. The approach has been successfully implemented before, in MRI scans, with neutron tomography and at synchrotron X-ray facilities, but for laboratory-based CT systems, until recently it has not been technically possible.

The impact 4D CT could have on metrology in manufacturing industry now and in the future is significant. The technique could be the overarching solution for inspection of fatigue crack propagation in life-critical components, for example, or for following battery degradation or studying chemical reactions. The valuable information learned from 4D CT scans can be used to improve software models of crack propagation in samples too large or dense to inspect.

The big data collected and its intelligent interpretation are ideal for meeting the demands of Industry 4.0 factories worldwide and for taking quality control to the next level. At the other end of the scale, the availability of CT contract inspection services is a perfect way for smaller industrial organizations to access the benefits of this relatively expensive technology. Q