Lens and camera manufacturers need to collaborate to develop new mounting standards for the new, large sensor formats already on the market, as well as the ones that will be introduced.

Imaging sensors in the machine vision space have traditionally fit into cameras utilizing only a couple of different camera mounts, largely dominated by C-mount. However, newer sensors are beginning to grow far too large for C-mount to continue to allow resolutions to increase while maintaining high image quality. This has been addressed in industry by mounts like the TFL and TFL-II mount, but sensors have begun growing even beyond those sizes, where there are not any lens mounts with industrial standards. This has led to an interesting transitionary space, where camera companies are developing their own mounts, making it increasingly more difficult to match lenses to them, if lenses even exist that can cover their format sizes.

The drive towards higher resolutions has been a constant in the world of machine vision since its inception. Recent years have seen 9 and 12 megapixels (MP) systems, which were recently the high-resolution options in the market, have now passed on the baton to 120 MP, 150 MP, and 250 MP image sensors (Figure 1). These high-resolution sensors are not used in the majority of machine vision applications, but the whole industry is pulling upwards to higher resolutions. These increases are achieved through two different methods: shrinking pixel size or growing the overall sensor size.

The lack of imaging lenses compatible with these new, larger resolution sensors is one of the primary challenges threatening the continued push to higher resolutions. Optics may not properly pair with a sensor for one of two reasons: the lens’ resolution is not high enough, or the lens simply does not have the light gathering ability to get light to cover the corners of the sensor, resulting in unused pixels and dark edges of the image. While the resolution required is very dependent on the specific use case, there is a common misconception within the machine vision field that optics are not suitable for a sensor unless the lens’ resolution is better than the sensor’s Nyquist frequency (ξNyquist), which is defined as: 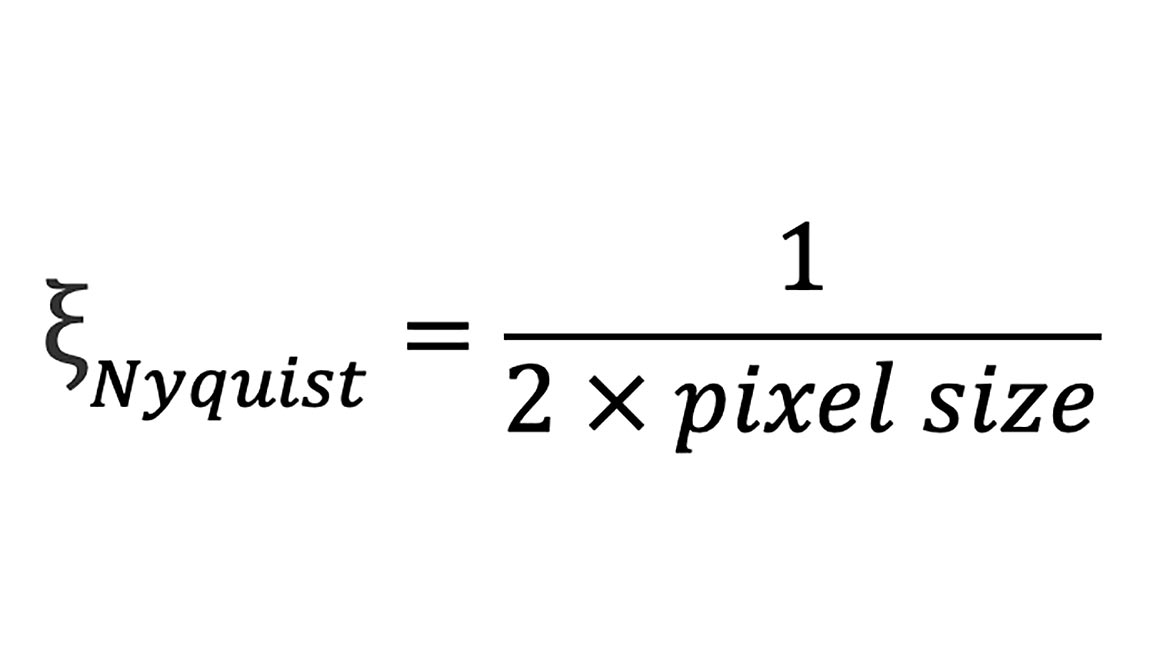 Image Source: Edmund Optics (Click on the image to enlarge.)

This assumption is not true, as imaging at the Nyquist limitation is unreliable and should only be utilized in highly controlled situations, although this article will not discuss these reasons in more detail.

The second issue of not properly covering the sensor discussed earlier is much more difficult for imaging system integrators to deal with. If the sensor is larger than what the optics can handle, pixels outside of the usable area are collecting no information while adding extra expense and noise. While lenses intended to be used with smaller sensor formats are sometimes intentionally used on larger sensors, such as when inspecting a circular object like a bottle-top, usually it is desired that all pixels be gathering light and contributing to the image. Because there are limits on how small pixels can be shrunk, high resolution sensors tend to be larger in size, causing these illumination issues.

It seems like fixing this issue would be simple: just making bigger lenses to cover the full sensor. However, not only does this need to be balanced with maintaining reasonable cost, size, and weight, but the mounting interface between the camera and lens may need to be changed. Until recently, the largest individual dimension of the camera sensors used in machine vision systems has typically been either 17.6 mm or smaller, which was known as a 1.1-inch sensor format, or 43.3 mm or greater, which is known as a full-frame sensor format. C-mount covered most of the smaller sensors while photographic mounts like F-mount covered full-frame sensors. However, the desire for higher resolutions has led to the introduction of new sensor formats between 1.1-inch and full-frame sensors including 1.2 inch, 4/3 inch, APS-C, and APS-H image sensor formats (Figure 2). There is now a continuum of available sensor sizes and traditional lens mounts that do not properly cover these new sensor sizes. 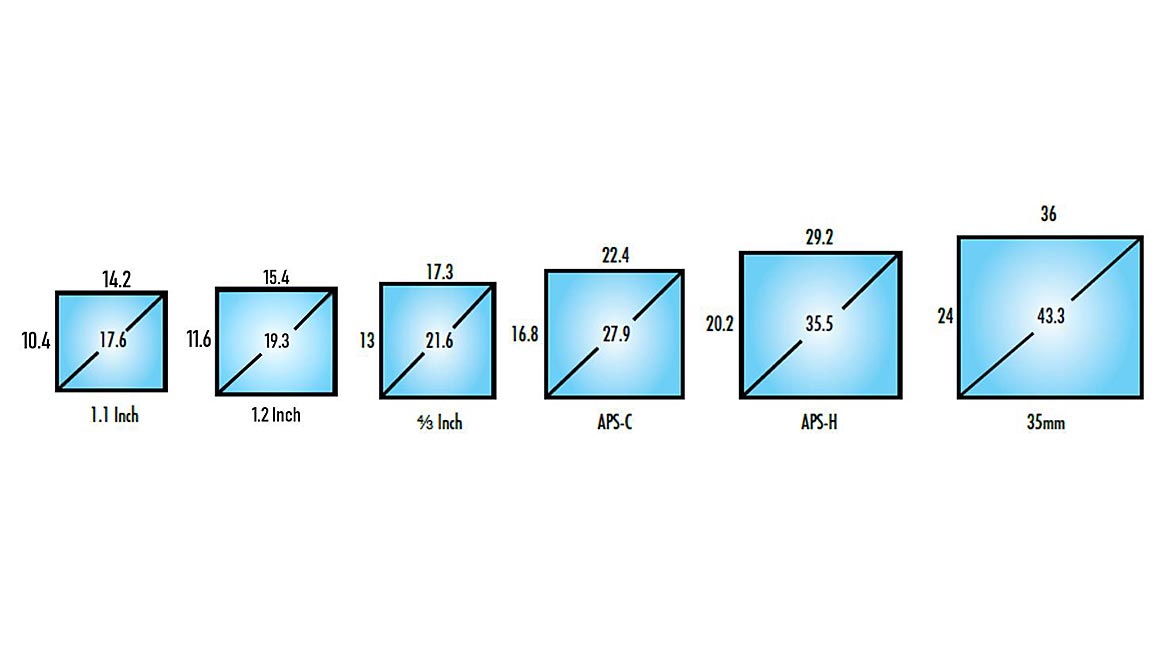 
In fact, new cameras and imaging lenses have been released over the last few years with the TFL-mount (M35 x 0.75 mm threading), which is compatible with sensors between 1.1” (~18 mm in diagonal) and APS-C (~30 mm in diagonal). The TFL-mount standard itself was created a few years ago, but until recently there were no available products meeting this standard. While C-mount will almost certainly keep its dominant position in machine vision for the predictable future, TFL-mount will likely become more widely used over time as higher-resolution, mid-format sensors become more common. While 1.2 inch and 4/3 inch sensors can physically fit into a C-mount camera, larger mount standards like TFL-mount are recommended in these situations because the sensor approaches the edges of the camera opening (Figure 3). Light rays need to be able to make it to the corners of 1.2 inch and 4/3 inch sensors without clipping mechanics of the lens housing. Also, light rays passing right by the edge of the mounting can introduce stray light to the system, degrading system performance through glare or hotspots. 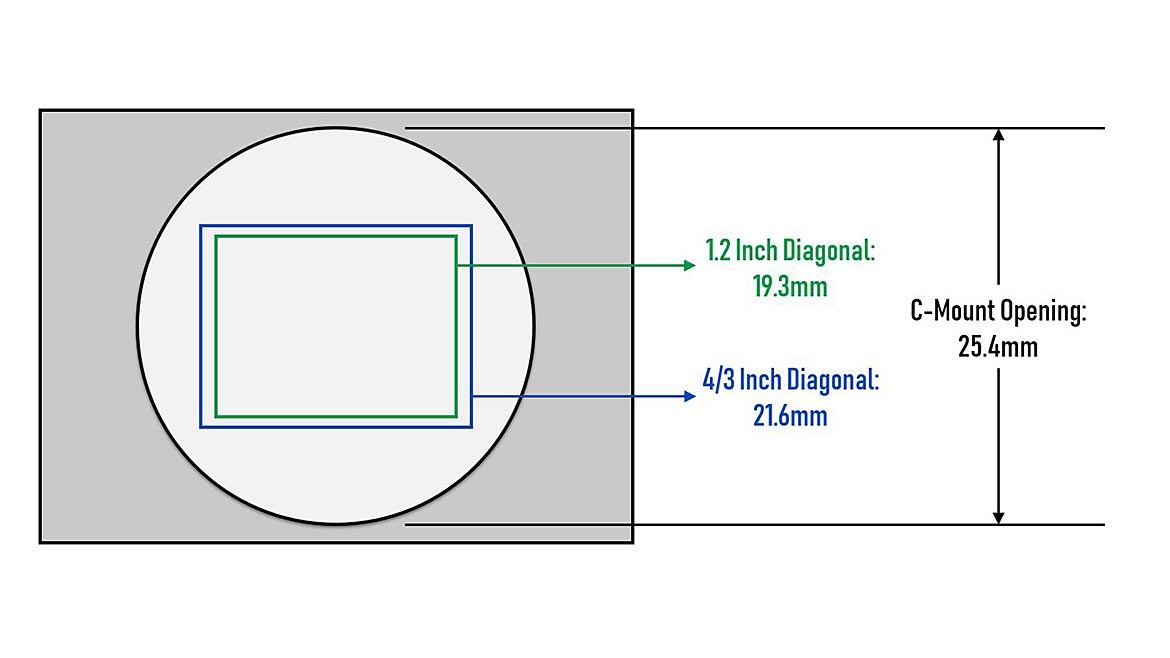 Figure 3: The opening of a C-mount camera can fit 1.2 inch and 4/3 inch sensors, but it gets close enough to the edges of those sensors that it can introduce issues such as stray light. Image Source: Edmund Optics (Click on the image to enlarge.)


As mentioned earlier, the rough limit for sensor diagonals compatible with TFL-mount lenses is around 30 mm, and there are already many sensors in the industrial space that are larger than that. At first glance, it may seem like F-Mount lenses typically used with full frame sensors can cover these new sensor formats. However, this oversized mount results in lenses that are larger and more costly than necessary. Counterintuitively, they also underperform, as tradeoffs were made during their lens design for them to cover the larger full frame sensors. The F-mount can also introduce misalignment between an imaging system’s optical and mechanical axes. Lenses designed specifically for intermediate sensor formats require less design tradeoffs, resulting in optimal performance.

M42 mount, on the other hand, is a prime example of when the best intentions can go horribly wrong due to a lack of industry standardization. Multiple camera companies make mounts that are labeled as M42 mounts, but there is actually no agreed upon M42 mount “standard.” Many camera and lens manufacturers producing several different types of M42 mounts can make pairing lenses and cameras incredibly confusing. For example, we offer two lenses that are both M42 and have identical optical designs, but they are not compatible with the same cameras. They have different flange distances to be compatible with the different M42 mounts offered by different camera manufacturers.

This story of the M42 mount is a warning of what can occur when standards are not properly utilized in the machine vision market. The development of new sensors pushing beyond existing standards creates the conditions where this mounting mismatch can happen again. The Japan Industrial Imaging Association (JIIA) specified several different mounting standards in their LE-002-2018 document for different sensor sizes in 2018. However, the standards for sensor formats greater than full frame are relatively underspecified, which is one of the factors that can lead to inconsistent nomenclature and design. Assuming that adapters can be introduced later to solve this issue is not a customer-friendly way to develop products, but with the lack of standardization there currently are not many better choices.

Lens and camera manufacturers need to collaborate to develop new mounting standards for the new, large sensor formats already on the market, as well as the ones that will undoubtedly be introduced as the industry continues to push towards higher resolutions. More problems will be born from continuing product development in a vacuum without alignment with each other. If you are integrating one of these newer sensor format cameras into your machine vision system, talk to your lens supplier for guidance as to whether one of the newer mount standards like TFL-mount can help you take full advantage of the sensor.