By combining powerful vision tools, simple setup and a modular design, vision sensors set new standards for value, ease of use and flexibility.

A wide range of single-purpose point sensors such as proximity sensors, lasers and photocells have long played a key role in virtually all factory automation systems by detecting the presence of parts or assemblies, performing measurements and identifying colors, among other tasks. Machine vision systems, on the other hand, perform more complicated operations such as complete inspection of a part. The work performed by machine vision may include multiple dimensions and presence or absence of various components or determining the position and orientation of a component for a subsequent operation. Simpler, less expensive machine vision sensors have recently emerged to target operations currently performed by point sensors, as well as many other inspection tasks, at a similar price point. Here we review the capabilities and potential applications of vision sensors.

For many years, developers of automated systems have used traditional point sensors to detect the presence or absence of parts or assemblies for controlling machines and processes. For example, photoelectric sensors generate a beam of light that is typically aimed at a detector. At some point in the process, the part is expected to make an appearance at just the right position to interrupt the light circuit. The sensor provides a binary output depending on the presence or absence of light at the detector. Point sensors are still relevant in applications where only verification of the presence or absence of a part is required. But the capabilities of photocells are limited; by restricting the inspection to a single point, photocells have no way of knowing if the part is the one that was expected, nor can they assess the quality of the part or whether it has been correctly assembled. Point sensors also require tight alignment between the source and the detector. If unforeseen variation is added to the process, there is no way to adapt.

Many automated systems have more complicated inspection requirements, such as ensuring that parts are not just present but properly positioned and aligned with other parts or equipment, or determining whether the correct part is present and in the proper orientation. The traditional approach in these applications has been to install an array of photoelectric sensors, limit switches, proximity switches and other types of point sensors that work together to address more complicated issues. For such complex inspections, engineers have been switching to machine vision systems that employ image-based algorithms to inspect parts and assemblies at critical stages of manufacturing. One machine vision system can replace many point sensors in an area on the production line, potentially providing the customer very large savings in initial integration costs and ongoing maintenance.

When machine vision systems were first introduced, their cost was high, and programming was complex and required extensive expertise. Following the same trend as other computing and electronics products over the past decade, machine vision systems have dropped substantially in price, and they have become much simpler to configure for specific applications. More recently, the cost of machine vision has reached a level where a new, more affordable product category called vision sensors has emerged. Relatively simple and inexpensive, vision sensors can replace conventional point sensors and provide significantly greater capabilities. As a general rule, vision sensors are designed for pass/fail inspection operations where the objective is to determine whether the correct part is present, a specific dimension is within a specified range, the number of parts present are within a range, and so on.

Vision sensors offer the ability to perform these and many other inspections at a lower cost and with a much simpler setup than conventional vision systems. A typical vision sensor includes a complete image formation system with lenses and lighting. Some vision sensors allow the lens and light to be swapped out if necessary to meet the requirements of specific applications. Most vision sensors feature an intuitive point-and-click user interface for setting up the device. For example, a customer can inspect for the presence or absence of a part or feature simply by focusing the sensor on the object to be inspected and drawing a box around the feature of interest. Some vision sensors are also capable of more complex inspection operations such as measuring distances, angles and circle diameters.

Vision sensors can be triggered by a signal from the automated system’s programmable logic controller. Some vision sensors also provide part-finding capabilities that locate the position of a feature in the image. Pattern-matching tools available in today’s vision sensors utilize advanced geometric pattern-matching technology to reliably and accurately locate parts despite visual variations such as part contrast, multiple parts, changes in lighting, degraded appearance and partially obscured features. Pattern-matching tools make it possible in some cases to reduce the need for mechanical part fixturing, which can provide significant cost savings.

Gaskets are used extensively in automobile production to ensure a tight seal between irregular mating surfaces. Because automation is used throughout the automotive assembly line, inspecting for a proper hole punch on these gaskets is critical to avoid upstream process issues. In this case, a fixture jig and 13 individual photoelectric sensors would be required to inspect the part. The fixture design, cost of sensing equipment, and high level of maintenance required to keep all 13 sensors and detectors in perfect alignment can be quite costly and lead to a marginal return on investment. A better way is to use a single vision sensor to inspect all 13 through holes in one image. An edge-intersect tool is used to locate the part, which eliminates the need to fix the part precisely in front of the camera. When the part is properly located, 13 individual pixel-count tools are used to detect the presence of a through hole. Any missing hole will cause the part to fail. This solution does not require any special fixturing or changes to the work cell. For an application like this, a vision sensor can be integrated with existing equipment in a day, minimizing the upfront investment and delivering valuable process data immediately. 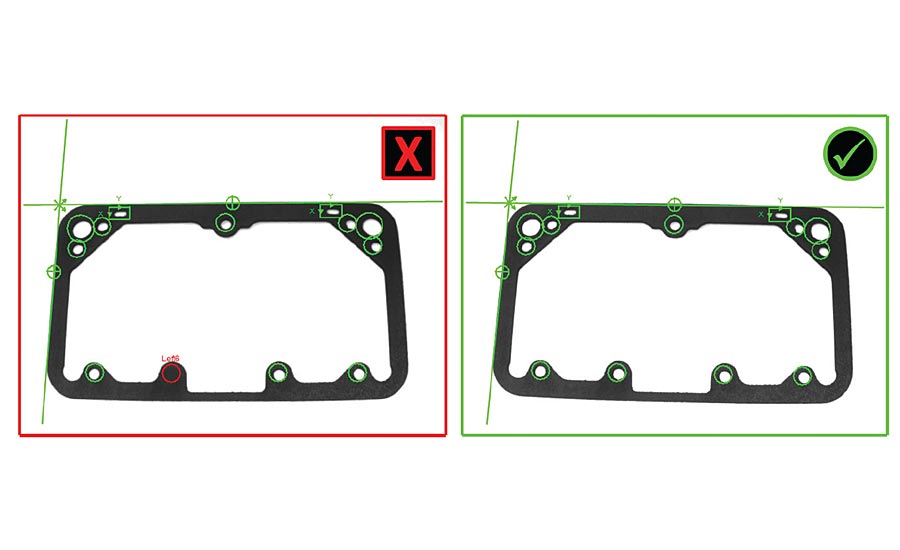 In some applications, it is important that a dial be set to the right location to ensure proper installation or final product configuration. This is often difficult (and in some applications, impossible) to accomplish with a traditional point sensor designed to check for the presence or absence of a component rather than subtle differences in its orientation. In contrast, a vision sensor can easily inspect the dial on a thermostat to confirm that it is in the correct position—in this case, set to the lowest temperature. 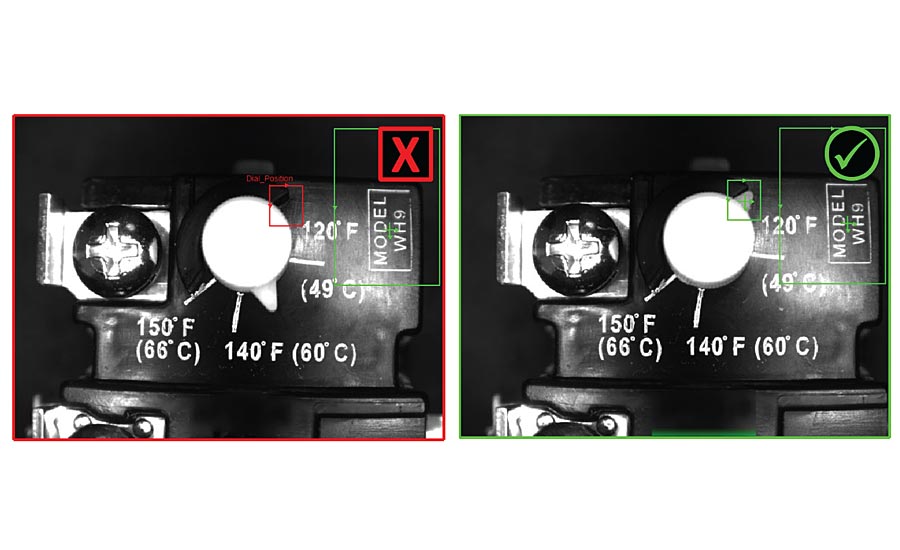 Figures 4 and 5: Vision sensor inspection of thermostat with dial set to wrong position (left) and to correction position (right).

Proper filling is critical in many manufacturing applications. Vision sensors throughout the production line identify rejects before secondary or final packaging, saving money by avoiding a bad product. Unlike traditional point sensors, vision sensors can perform multiple inspections on each image. In this example, a bottle passes in front of the sensor, which validates both fill level and cap assembly before the product is packaged. The bottle is located using a pattern tool to find the cap, the fill level is inspected using a pixel-count tool, and cap assembly is inspected with an edge tool. 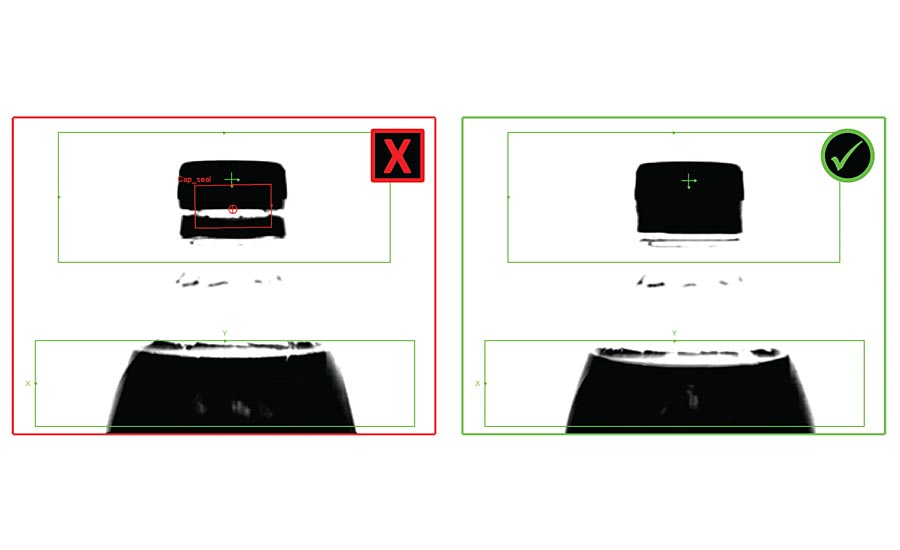 The new generation of vision sensors combines the power of a vision system with the simplicity and affordability of a vision sensor to accomplish basic pass/fail inspections with intuitive point-and-click setup tools while offering an expanded range of location, pixel counting, bright, contrast and measurement tools. By combining powerful vision tools, simple setup and a modular design, vision sensors set new standards for value, ease of use and flexibility. V&S